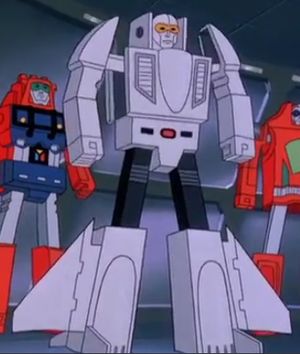 Leader-1 is the heroic leader of the Guardians. Wherever Cy-Kill and the Renegades aim to spread evil, Leader-1 will always be there to fight for justice! 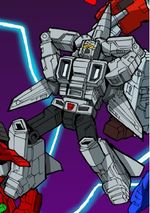 The event known as the Cataclysm threatened the fundamental stability of Leader-1's reality. Over a period of two years, the Cataclysm Survival Treaty brought Guardians and Renegades together in a strained peace to find the source of their universe's deconstruction.

Nevertheless, Leader-1 was appalled at Doctor Braxis's revival of the Dimensional Interfacer technology in exploring the problem. On the twenty-second level, Braxis identified the source of the Cataclysm, apparently spawning from endless warfare between two robotic factions called Autobots and Decepticons. Cy-Kill's first instinct was to invade Level 22 and annihilate these Transformers, but Leader-1 insisted on caution. Scouts would be sent through the Interfacer first to examine the Transformers' universe and determine what exactly was causing the Cataclysm. Withered Hope 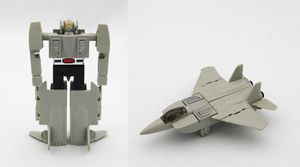 Leader-1 was released in a gift pack with Flip Top and Turbo. All three toys were unchanged from their original releases. 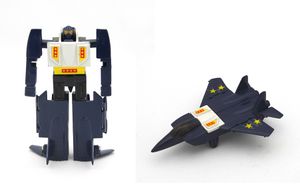 The regular-size Leader-1 mold was redone in a blue and white color scheme, with additional military style detailing. 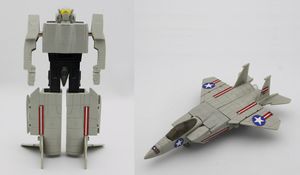 A straight import of the Machine Robo Big Eagle Robo toy, a scaled-up version of Leader-1 transforms from robot to F-15 Eagle.

The fifth toy from the third wave of figures, F. 15 Man was released by Bandai Australia in 1983. He remained identical to the original Eagle Robo toy, albeit packaged on a blue backing card.

In 1984, the figure was re-released with his GoBots name and faction on a new black backing card depicting a yellow-tinted alien landscape. A running change in 1985 saw the figure replaced with his blue and white variant.

The scaled-up version of Leader-1, identical to the Big Eagle Robo toy but packaged in a new box, was among the ten figures released under the "Series 2" banner.

As part of a cross-promotion between Bandai Australia, Hanimex Cameras, and Nabisco Brands, a limited edition 'polished chrome' Leader-1 figure was made available in 1986. Within specially-marked Nabisco products (such as Vita.Brits cereal) were 10 different Machine Men stickers to collect. On the back of each sticker was a voucher, which people could fill in and give, along with a roll of film, to any participating photo labs. Upon completion, the recipient would receive both their new glossy prints and the free Leader-1.

It is unknown how many chrome Leader-1s were produced.

A carded repackage of Eagle Robo, the figure now known simply as F15 Eagle was released by Bandai Europe in 1984. A running change in 1985 saw the figure replaced with his blue and white variant. No changes were made to the backing card, despite catalogs and packaging from that year onward listing the toy under his GoBots name.

An adaptation of the MOSPEADA Legioss Alpha fighter model kit, when fully assembled it can convert between robot and jet fighter. The kit looks virtually nothing like Leader-1 usually does. 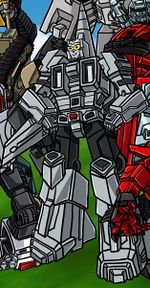