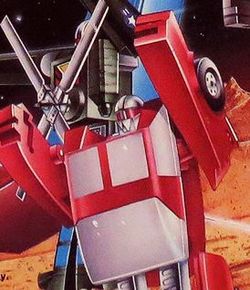 Street Heat is probably a really friendly guy, but anytime you see him there's a 50-50 shot he's secretly evil at the moment. 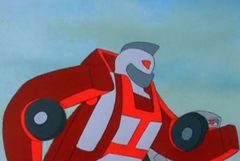 Street Heat was one of the Guardians captured and replaced by Cy-Kill's army of evil doppelgangers. Doppelganger Later, Street Heat and Royal-T were assigned to prison duty at the facility on Elba. After Cy-Kill was captured, his superior willpower burnt out the Brainstormer while trying to extract Renegade secrets, so he was imprisoned on Elba for a week while the upgraded Brainstormer on GoBotron was prepared. Street Heat and Royal-T grumbled about their tedious guard duty, and Cy-Kill took advantage of their attitude. Combining hypnotic rays from his eyes with his natural charisma, Cy-Kill managed to bring the two Guardians over to his side. They attacked the other guards Heat Seeker and Van Guard, helping Cy-Kill capture them, and seized control of the prison facility. When Turbo arrived from Earth to check on security along with Hans-Cuff, Spay-C and the feigning defectors Fitor and Geeper-Creeper, Street Heat shot at his fellow Guardians, adding the new arrival to their captives. The mesmerized Guardians were left on Elba to guard Turbo, Heat Seeker and Van Guard while Cy-Kill took the Command Center back to Earth as a Trojan horse with Hans-Cuff and Spay-C. Turbo and the Guardians escaped thanks to Matt Hunter, and the traitors Street Heat and Royal-T were chased down and apprehended. Escape from Elba

During the Diaspora, Street Heat was dispatched to Level 72 along with an assortment of Guardians and Renegades. Cultural Appropriation 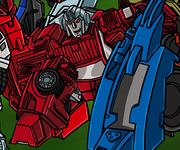 While communicating with his supporters in Axiom Nexus, Cy-Kill decried the disadvantages of hypnotized slaves, as they lacked the adaptability and initiative of truly dedicated followers. He recalled his mesmerism of Street Heat and Royal-T on Elba as an example. Renegade Rhetoric 2015/11/24 In an alternate reality created by Cy-Kill messing with history, Street Heat and Dozer helped Zeemon instigate an insurrection against Renegade-controlled Gobotron. Renegade Victory Part 2 When Cy-Kill discovered an advanced society that lent its loyalty to the fastest racer, he entered his Renegades into the Alienapolis race, and the Guardians entered as well to foil his plans. However, the Renegades began cheating and Street Heat was knocked out of the race by Cop-Tur's booby traps. The Alienapolis Five Million

As Sideways and Gong played with mixing universal streams, the Decepticons staged an all-out assault on Guardian City on Earth. Street Heat and Hi-Way were escorted to oblivion by Soundwave and his Recordicons. Echoes and Fragments

Street Heat was one of the Go-Bots that joined Leader-1's army to face the Renegade uprising. Issue 2 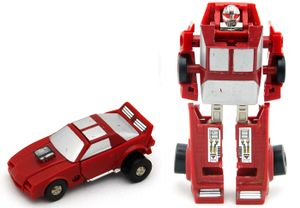 Street Heat was released by Tonka in the second series of GoBots, and converts from robot to Chevrolet Camaro Z28 racing car in 6 steps. The toy was a recolour of Hot Rod Robo from Machine Robo, with a new red colour scheme as presumably Tonka had over-purchased on red plastic. Combined with the omission of the sticker sheet from the Japanese release it makes him one of the dullest custom race cars ever. The toy has articulation at the shoulders, hips and knees - though the leg movement is only parallel to the robot's body. 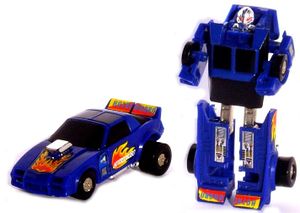 Like several European releases the Robo Machine version of Street Heat retained the Japanese colour scheme and stickers, meaning he was blue and had some awesome flames on his vehicle mode. For unknown reasons the European release came out much later than elsewhere.