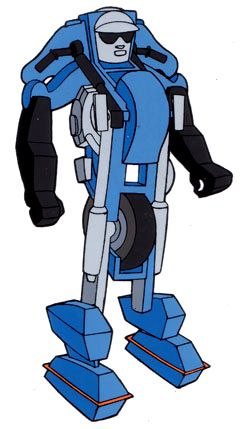 Night Ranger is a friendly Guardian who frequently operates on GoBotron as a security officer, often under the direct command of Hans-Cuff. He isn't very good at guarding things, though.

When Roguestar and a huge fleet of Thrusters under the joint command of Cy-Kill and the Master Renegade appeared over GoBotron, Night Ranger manned a turret along with Defendor. While they were able to score a hit on the huge Renegade flagship it had no effect and return fire immediately destroyed the turret. Night Ranger escaped injury to return to the much-reduce Guardian Headquarters, where he watched Cy-Kill announce the impending Disassembling of Leader-1, though he played no part in the subsequent rescue mission. The Fall of GoBotron At some point he was captured and placed onboard a damaged Command Center with other Guardian prisoners, awaiting transport to the Prison Moon where they would be put into the Disassembler. Again Night Ranger just stood there until Scooter and Sparky were able to trick the Renegade guards into abandoning ship. Flight to Earth Turbo managed to get the ship to Earth, where the Last Engineer unveiled the Power Suits and Night Ranger stood around doing nothing. Night Ranger was one of the Guardians who applauded Leader-1's team when Zeemon honoured them. Return to GoBotron 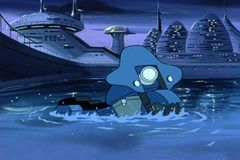 Night Ranger was assigned to guard a new Astrobeam at Astro-Science Center along with Path Finder and Sparky when it was attacked by the Renegades Cy-Kill, Crasher, Cop-Tur and Steamer attacked. Night Ranger converted into motorcycle mode before he could be rammed by Crasher but the resulting duel with the Renegade saw him barged off the road and into a pool of water as the Renegade raid was ultimately successful. Steamer's Defection He later pulled guard duty on an industrial outpost which was again attacked by the Renegades; on this occasion he was able to escape damage by simply converting to motorcycle mode and driving off as Cop-Tur strafed Night Ranger and Scratch until reinforcements arrived.The GoBot Who Cried Renegade Cy-Kill used Doctor Go's spectrometer to take over Leader-1, Turbo, Blaster and Good Knight and sent them to GoBotron to kidnap the Guardian Council. Night Ranger was on security duty along with Hans-Cuff and broke with tradition by actually doing something and trying to intervene. However, Blaster shot a missile at the pair and the controlled Guardians were able to make a fighting retreat to their Command Center.Whiz Kid 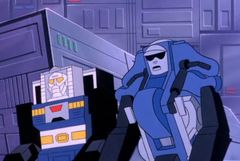 Despite this questionable pedigree Hans-Cuff selected Night Ranger to help him provide security for preliminary peace talks with the Renegades in GoBotolis. However, Turbo - suspicious of the veracity of the Renegades' desire for peace - was able to sneak past the pair by simple dint of walking past them when their backs were turned and Cy-Kill actually managed to sneak Scales inside as well. When the intruders were belated detected Night Ranger showed greater motivation in preparing to kill Turbo than he had ever done fighting Renegades but thankfully Leader-1 was able to call him off. Pacific Overtures When the captive Fitor was delivered to GoBotron, Night Ranger was among the security guards gathered by Zeemon to receive him. Fitor to the Finish Night Ranger later helped flush Cy-Kill, Crasher and Cop-Tur towards the Thruster simulator when they attempted to kidnap Zeemon from the graduation ceremony at the Guardian Academy. Guardian Academy Later he was with Zeemon and Man-O-War when a Renegade attack on a Guardian convoy sent huge plates of metal falling down on GoBotolis; true to form he stood there and did absolutely nothing.Mission: GoBotron 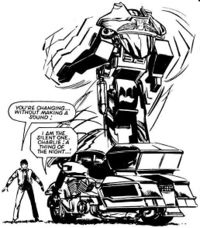 One of the Security Forces volunteers who travelled with Ex-El to Earth in pursuit of Stron-Domez, Night Ranger was put in a converting body as the Guardians investigated the Renegades' takeover of the Datafile Electronics factory. Thanks to his ability to create his own environment to prevent Renegade sensors from detecting him he was chosen to investigate the factory with Charlie Bampton in order to locate the factory's enslaved workers. Night Ranger was able to fly over the factory walls in his motorcycle mode and get the human inside the complex, then retrieve Charlie and report back to Ex-El on the Command Centre. Thanks to their intel Charlie and Truck were able to free the workers, allowing a full Security Forces assault. In the ensuing battle Night Ranger was able to disable Tank's gun arm, leading to the capture of the Renegade along with Fitor, Loco and Cop-Tur.The Robo Machines, Story 1

However, Cy-Kill and Stron-Domez escaped, with the latter being rebuilt as Zod. His new form badly damaged the Command Centre, but after repairs Leader One led his troops to the scrapyard Zod was using as a base to build the Devil Invaders. By the time they arrived the first, Casmodon, had already set off to attack London. While the Guardians' combined firepower was enough to immobilise Zod, Casmodon was a different kettle of fish - their weapons failed to even scratch the massive Devil Invader, and his return fire destroyed Night Ranger, leaving his remains to crash down into the street.The Robo Machines, Story 2

Night Ranger was assigned to the Guardians' Earth Force, under the command of Leader-1. The unit helped chase off the Enemy Invaders when they menaced Turbo and Nick. The Monsters and Mister Grogan He later piloted one of the arms of the Guardians' Battle Suit during a battle in Russia, helping rescue Anya Turgenova and Boris Bulkanikov from the Renegades The Capture of Comrade Boris and later did so again when the Guardians successfully defeated the army Cy-Kill had gathered at Mauna Mauna. The Battle at the End of the Earth 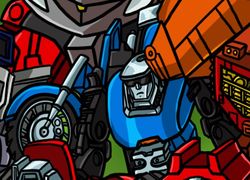 During the Diaspora, Night Ranger was dispatched to Level 51 along with an assortment of Guardians and Renegades. Cultural Appropriation

After the Robo Rebels were arrested on suspicion of attacking Zeemon, they escaped to prove their innocence. Night Ranger and Mach-3 confronted the cadets outside the Gobotron Stockades, but they could not prevent their escape. Fugitives Night Ranger and Scratch were working security for the Space Hawk project when Cy-Kill attacked. The Renegades bested the Guardians and made off with the Space Hawk prototype. The Hawks of Space Part 1 Night Ranger and Dumper were guarding a Guardian storage facility on Gobotron when Heart Attack and Clutch assaulted it. They overwhelmed the two guards and made off with the broken components of the Puzzler combiner. Six Heads are Better than One

In short, Night Ranger is a terrible guard.

Sideways and Gong began playing with universal streams, causing elements of the GoBots and their history to merge with a Transformers universe during the latter's first encounter with Unicron. As a result, Jazz and Cliffjumper were intermittently replaced by Turbo and Night Ranger aboard Moonbase One during Unicron's approach to Cybertron. Echoes and Fragments

Night Ranger was one of the Go-Bots that joined Leader-1's army to face the Renegade uprising.Issue 2 He stayed in his service over the next few centuries, and was thus probably brainwashed myriad times. Night Ranger either owed Leader-1 his life at this point or was convinced that he did. He was later shot by Cy-Kill with the Command Center's weaponry, but recovered sufficiently to carry the dead Leader-1's body in a funeral bier fashioned from the chest of the Go-Bot god Courageous.Issue 4 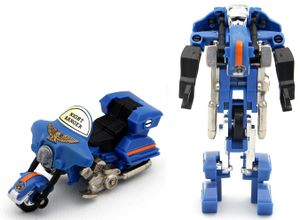 Night Ranger was released by Tonka in the second series of GoBots, and converts from robot to Harley-Davison Electra Glide in 9 steps. The toy was a recolour of Harley Robo from Machine Robo, with a new blue colour scheme - one of the first GoBots toys to feature all-new scheme - and different factory stickers, with the additional sheet of the Japanese release omitted. Night Ranger's hips and knees can become loose; as the figure is top-heavy it can make worn examples of the robot difficult to stand. This sadly tends to negate his shoulder articulation, as the arms often have to be arranged to compensate for his lack of balance. 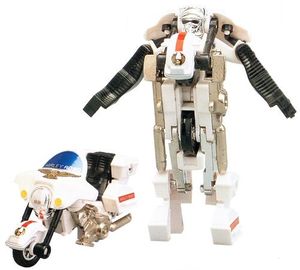 The European version of Night Ranger initially retained the white colour scheme of Harley Robo, though later on some blue GoBots overstock was also issued, using the same cards and number as the white version. Both versions included the extra sticker sheet of the Japanese version, and used the same factory stickers - meaning both still had 'Harley Robo' printed on their windscreen.

The fourth toy from the fourth wave of figures, Harley Man was released by Bandai Australia in 1984. He remained identical to the original white Harley Robo toy, albeit packaged on a blue backing card.

Later in 1984 the figure was re-released with his GoBots name and faction on a new black backing card depicting a yellow-tinted alien landscape. A running change in 1985 saw the figure replaced with its blue variant.

The white version of the figure was reissued by Bandai in Europe during 1993 as part of Robo Machines, with the 'Harley Robo' stickers updated to say 'Robo Machines'. For trademark reasons the figure was renamed simply Motor Bike in the British market, with localised versions of the name used in other markets. In Italy, where the toy was released by Giochi Preziosi, it was named Moto. Sadly, like most of the Robo Machines figures Motor Bike uses poor quality materials and suffers from mould degradation.