Doctor Go is Cy-Kill's most fiendish scientist among the Renegades. 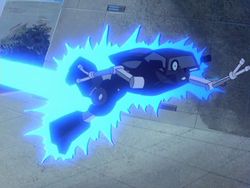 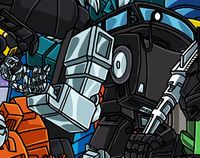 "I didn't spend six years in Evil Medical School to be called 'herr,' thank you very much."

After the end of the Cataclysm, "Doctor Go" confirmed that Gobotron was safe. Last Sunset

Using information stolen from Anya Turgenova via Brainstormer, Doctor Go created the Renegades' own line of reverse-engineered Space Hawks to match the Guardian's. The Hawks of Space Part 2

Doctor Go once created a Sonic Amplifier designed to boost the powers of GoBots, but it was stolen by Doctor Braxis to temporarily turn some of Scooter's monstrous holograms into tangible threats. Shock and Awe

The Master Renegade briefly led a revolt among the Renegades by providing four of them with Power Suits of their own, and the combined Power Warrior, Grungy. After the Master Renegade abandoned his allies with the Power Ship, however, Spoiler provided Doctor Go with the ship's specs, giving Cy-Kill the hope of recreating his own Power Warrior. Coup de Grunge

Following an off-hand remark by Crasher, Cy-Kill commissioned Doctor Go to create the RoGuns, sentient robot weapons to increase the Renegades' firepower. Unfortunately, Rifle, Pistol, and Squirt were intelligent enough to choose NOT to serve the Renegades, and soon fell in with the Guardians instead. The RoGun Ruckus

Doctor Go was able to modify Rogue Star to make its primary particle beam cannons into the largest Astro-Beam ever conceived. This allowed Cy-Kill to temporarily relocate the Communication Moon of GoBotron for his own purposes. The Stolen Moon

By recovering a few small samples of Sorium, Doctor Go was able to recreate Cy-Kill's Pulsar generator as a smaller, less-powerful handheld brainwashing device. And to All a Good Knight

When Cy-Kill challenged the Guardians to a basketball game with the fate of the Earth in the balance, Doctor Go created a telepathic chip using Naismith radiation that would allow Cy-Kill to control the movement of the ball in flight. The Renegades were cheating their way to a merry victory when the Guardians caught on. Spy-Eye and Wrong Way cornered Go on the Thruster and learned how to disable the chip. Double Dribble

Doctor Go helped Cy-Kill and his men create costumes for infiltrating the SciFi Con in New York. He provided Cy-Kill with a costume based on the noble and menacing Cylons. Darkest Before the Dawn

Once the Renegades stole some Scootonium from UNECOM, Doctor Go was able to perfect the Quantum Tunneling Shield technology, making Cy-Kill virtually impervious to harm. The Scootonium Scenario

After returning home from Axiom Nexus, Cy-Kill nevertheless missed the attention and recruitment possibilities provided to him by the TransTech transmissions. Therefore, he ordered Doctor Go to construct the means for him to remotely hack into the TransTech broadcasts from Level 1, continuing to transmit his words to Axiom Nexus when he found the time. Renegade Rhetoric 2015/11/05

A perfectionist at heart, Doctor Go tinkered extensively with the Grungy Power Warrior designs as he tried reverse-engineering the Master Renegade's work. Cy-Kill eventually forced him to stop dithering and finalize the designs for Project: Nemesis. Renegade Rhetoric 2015/10/20 Finally, Doctor Go and Tic Tac completed their work on Nemesis, a Power Tank synched to Cy-Kill's brain waves, allowing him to control the Nemesis Power Warrior mentally once it was formed by the Power Suits. Combiner Wars Part 1

When the Renegades tricked the Guardians into leaving Earth and then shielded the planet beneath an Embargo Field, Crain Brain and Dr. Go watched over the field's projector in the Eiffel Tower. They were ultimately defeated by Tri-Trak, Nick Burns, and the dimension-hopping Spy Changers Wheeljack and Trailbreaker. Ask Vector Prime, 2015/09/30

Sideways and Gong began playing around with universal constants, mixing events from a reality of GoBots with those of a reality of Transformers. Dr. Go and the Renegades found themselves on Earth attacking Autobot City. Go directed the Dread Launchers to prevent Blaster from signaling for reinforcements from Moonbase One. Later, after the Renegades lost and fled aboard Astrotrain, Dr. Go challenged Zero, Puzzler, and the others for leadership of the Renegades and Decepticons after Megatron...departed. Echoes and Fragments