The Last Engineer has a new project that may turn the tide against the Renegades. 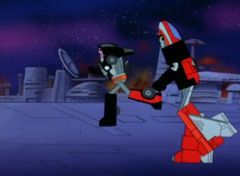 Crasher and Fitor have a good chuckle about what they're going to do to the Guardians and their allies. The recently-reassembled Leader-1 collapses trying to confront them but Turbo and the Last Engineer manage to take out the Renegade pair. However, Cop-Tur and Tank then arrive while the Last Engineer comes up with an escape plan - his workshop converts into a spaceship. The flames from its' launch allow Turbo to escape from the Renegades while the unexpected launch easily gets past Fly Trap and Water Walk, left on sentry duty in a turret. The Last Engineer tells Matt that the ship is called Courageous, and is part of the Power Suit system he was developing before the Renegade revolt. As they leave the planet GoBotron is in chaos with the Renegades unopposed. Scooter and Sparky are still at large however, and watch as Bad Boy and Block Head blast an unfortunate GoBot and take him away in their Thruster. The Guardian pair are unable to intervene as they're still being pursued by BuggyMan and Geeper-Creeper. Onboard Roguestar, Cy-Kill presses the Master Renegade to modify his Transgressor to work on humans ahead of the planned assault on Earth. The GoBeing states he needs a trianium crystal from his base on Antares III, and says he will only get Vamp and Scorp to collect it if he is made ruler of GoBotron, to Cy-Kill's fury. His mood gets worse when Screw Head patches through a call from Crasher, who tells of Leader-1's reassembly and escape. The Renegade leader is furious and tasks them with following the escapees to Earth to prevent UNECOM from being warned. They grab Cop-Tur and Tank to join them onboard Thrusters for the mission, giving Turbo some breathing space. The Renegade ships chase Courageous into hyperspace, unaware that Turbo has sneaked onto one of the Thrusters. 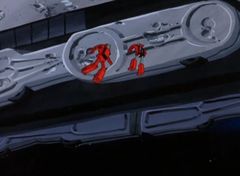 The Guardian shoots Tank, who hits one of the controls and unwittingly fires on Crasher and Fitor's Thruster, allowing Courageous to escape. The two Thrusters collide and are thrown out of hyperspeed, knocking Turbo out. Sparky and Scooter try to lose their pursuers by hiding in a cargo ship but BuggyMan realises and uses the device to fire the pair off towards GoBoton's sun. Meanwhile Cy-Kill has Dr. Go modify the GoBot captured by Bad Boy and Block Head into a monster the Doctor names Pincher. Cy-Kill intends to use Pincher to use to win the trust of the Master Renegade's minions on Antares III, sending his new recruit to collect the crystal needed. Above, Sparky laments the position she and Scooter are in until she spots a Command Center in a stationary orbit, and the pair make the dangerous leap from ship-to-ship. Courageous meanwhile arrives on Earth where Leader-1 delivers the bad news of GoBotron's fall to General Newcastle. Realising Earth will be next Newcastle puts UNECOM's research facilities at the disposal of the Last Engineer, who plans to finally finish the Power Suits. Sparky and Scooter are able to reach the damaged Command Center and realise it is being used to hold captured Guardians including Rest-Q, Path Finder, Wrong Way, Defendor and Night Ranger, with guards Twin Spin and Royal-T preventing the medic from helping the injured. As they watch Cop-Tur's Thruster arrives, signals Spoiler and transfers the captured Turbo onboard. 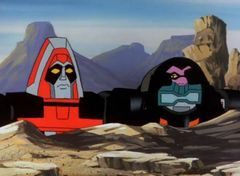 After the Thruster heads back off Scooter hacks into the Command Center's systems, getting the computer to fire off a series of warnings that convinces the Renegade guards that the ship is about to explode. Scooter and Sparky then free the prisoners. Turbo was in the middle of breaking out anyway and prepares to rush the bridge with Blaster, Flip Top and Van Guard, tearing the doors off before he realises Sparky and Scooter have already taken the ship. Turbo tries to fly the damaged ship but Screw Head spots the movement and dispatches a trio of Thrusters to investigate. Turbo manages to lose them and get the Command Center into hyperspeed, setting course for Earth. Crasher and Fitor are already orbiting the planet, trying to spy on Earth's preparations in the hope of redeeming their failures. They engage stealth mode and Fitor begins spying on the testing of the Guardians' new weapon. They watch as Leader-1 tests the new Power Suit and report back to him. Onboard Rogue Star the Master Renegade demands negotiations with Cy-Kill, who reveals the use of Pincher and threatens his rival before ordering the GoBeing back to work. When Cy-Kill gets the crystal he will be ready to attack Earth... 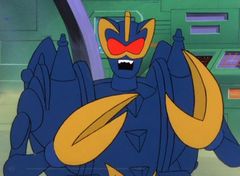 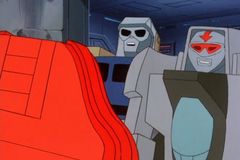 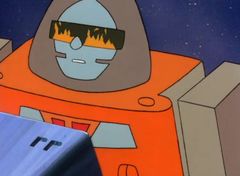 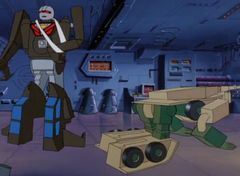