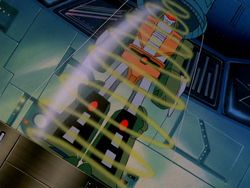 Blaster is a gruff but friendly Guardian. Active regularly on GoBotron and Earth, he logged many hours of practice in the Guardian Power Suits. 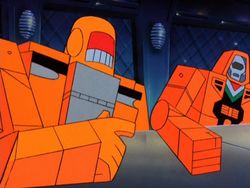 Blaster sat on the Guardian Council when Path Finder announced the defeat and capture of the Renegades, but also the impending threat of Cy-Kill's Zod armada. The Final Conflict

After Cy-Kill was imprisoned, Blaster and Flip Top acted as detention guards when the Renegade overlord made his escape attempt. They were injured in part by Blaster's own weaponry, and were buried in rubble as Cy-Kill and Fitor beat feet. Cy-Kill's Escape 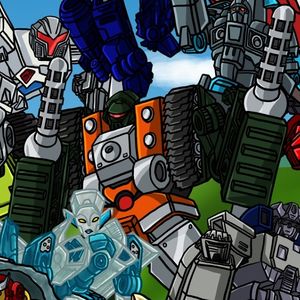 During the Diaspora, Blaster was dispatched to Level 72 along with an assortment of Guardians and Renegades. Cultural Appropriation

Blaster, Tail Pipe, and Leader-1 were in a Command Center chasing the Renegades chasing the Monster GoBot Creepy when they were overcome by powerful aliens called the Overseers. Using a matter superposition ray, the Overseers transported the GoBots to the other side of the galaxy to act as their slaves. They were fitted with restraining chains that disabled their power packs while also inexplicably altering their color schemes. Blaster was put to work with Creepy and Cy-Kill in the engine rooms until Leader-1 and BuggyMan orchestrated an escape. The GoBots came together to disable the Overseers, and were transported back to their original coordinates. Chains of Doom

As Sideways and Gong played with reality, elements of the GoBots and Transformers mingled together. Following the Battle of Autobot/Guardian City, Blaster mixed his role with his Autobot namesake. He picked up a distress signal from Moonbase One, and converted into his tank mode to improve the faint signal's strength. As Major Mo rallied the troops to deal with the new menace reported by Turbo, he reported that Blaster would stay behind with UNECOM forces. Echoes and Fragments 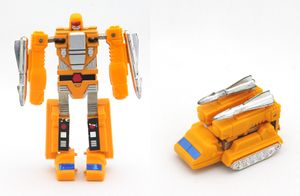 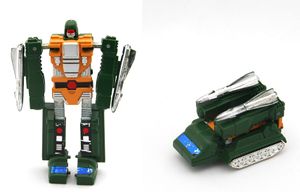 A redeco of the previous Blaster release, this version swaps his original all-orange color scheme for an orange and military green mix, more closely matching his color scheme from the regular cartoon series.