Earth is a planet in the Milky Way galaxy. It is the birthplace of humanity, but does have some good points.

Earth is made up of continents, which are further divided up into countries. The continents are usually surrounded by water, much to the joy of Dive-Dive, and a journey there might have made Man-O-War less cranky. 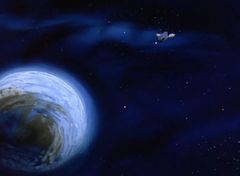 Unknown to anyone, Earth was the place chosen by the Evil One as his new stomping ground after he was driven away from GoBotron 6,000 years in the past; he set up a tomb in Peru before anticlimactically dying. None of this was known to any other GoBots, who first began covertly visiting and observing Earth 200 years ago. In Search of Ancient GoBonauts This led to them programming Modifiers for Earth-type vehicles, and many GoBots took on these designs for their vehicle modes. The Fall of GoBotron Overt contact would only be made much later, when Renegade leader Cy-Kill - his forces on GoBotron being reduced to having only a single fortress under their command - formed an alliance with the human scientist Doctor Braxis of NASA. Cy-Kill, Crasher and Cop-Tur headed to Earth in order to help Braxis conquer Earth, planning to use it as a staging ground to built a fleet of Zods to invade GoBotron. However, their Thruster was followed by a Guardian Command Center containing Leader-1, Turbo and Scooter. Initial contact was clumsy; while the Renegades' arrival destroyed the NASA shuttle Intrepid the ship's human crew Matt Hunter, A.J. Foster and Nick Burns weren't believed - partly due to the manipulative efforts of Braxis. While the trio of humans soon made allies of the Guardians the latter weren't keen on announcing their presence either. The Renegades were able to take control of Earth's population using Braxis' pulsar generator but the Guardians and their allies were eventually able to thwart Cy-Kill's plans; a side-effect of the mind control was that most of the humans remained unaware of the existence of the GoBots. The Final Conflict

However, the events were soon made public, and the Guardians made a formal alliance with the people of Earth, leading to the creation of UNECOM. Matt, Nick and A.J. were made ambassadors to GoBotron Cy-Kill's Escape while Braxis was imprisoned for his role in the invasion attempt, and became despised by the rest of the human race Nova Beam. However, while the Earth benefitted from its' close links with the Guardians, who built numerous advanced facilities and technology for their use while also helping them meet numerous other species as part of a formidable alliance Lost on GoBotron, the Renegades remained at large and frequently targeted the planet for strategic reasons, or sometimes just out of plain spite.

It was the next target for Cy-Kill and the Master Renegade after their conquest of GoBotron; thankfully a mixture of the pair betraying each other and the Last Engineer's Power Warrior Courageous meant they never got that far, and even lost control of GoBotron. Return to GoBotron The Renegades later attempted to tinker with the planet's history Time Wars, planned to fire the star-destroying Nova Beam at its' sun Nova Beam, kidnap its' leaders Trident's Triple Threat, flooded it with Insectoids Invasion from the 21st Level, froze it with the Climatizer Cold Spell, attempted to weaponize its' volcanoes Ring of Fire and had its' population miniaturised and held as hostages Clutch of Doom.

Good Luck survivors Akira Amachi, Luke Stewart, Mia White, Patricia Longfellow and Zen Ogawa all hailed from Earth and yearned to return after the ship was destroyed on Electronic Planet B-1. Return to the Good Luck They eventually found a ship to do so, in the process discovering that B-1 had been built by the people of Earth as a weapons testing ground. Goodbye - Battle Forever

During her time of Earth before her memories returned Leina was also involved in Blue May's attempt to hijack a Lightning L808 airliner containing BIBLE Block technology. She was able to foil the attempt with help from Interpol agent Laika Strange. Lightning Trap: Leina and Laika 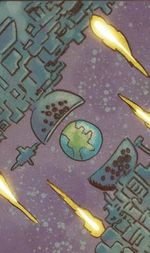 The people of Earth devised the Go-Bots, initially as the solution to parking problems before branching it to use them for numerous fields, including law enforcement, military hardware, motor sports, transportation, space exploration and more. However, a mixture of ever-increasing firmware and tinkering with the robots' G-chips by Coriander T. Banks led to a growing number going rogue, eventually rising up under the leadership of Cy-Kill. Issue 1 They were opposed by a group of loyal Go-Bots led by Leader-1. Issue 2 The battle would have dire consequences for Earth as both Go-Bot leaders became more and more self-obsessed and despotic. As their battle raged they also greatly extended the space station Gobotron, until it first completely surrounded Earth and then effectively buried it. While Gobotron thrived, Earth was forgotten about by most, hosting a tribe of regressed humans looked after by Turbo and Scooter, some mutant Go-Bots, the Go-Lems and little else.

The planet came back to prominence when the Go-Bot shuttle Spay-C, having watched the entire downfall of Earth, decided to release his human crew from suspended animation. As Spay-C neglected to tell them anything that had transpired they took Gobotron to be a Go-Bot planet until they journeyed inside it, discovering the organic core - which soil samples identified as Earth. Turbo subsequently told them the full story. Issue 3

Earth was subsequently the battleground for a series of events that saw both Leader-1 Issue 4 and Cy-Kill destroyed. A new generation of Go-Bots rose to power, led by Road Ranger. He decided it was time to leave Earth behind, detaching Gobotron and setting off into space. Two of Spay-C's crew opted to stay on Earth and try to guide the remnants of the human race, accompanied by a handful of Go-Bots such as Dive-Dive, who acted as guardian of the sea, and Screw Head, who ended the threat of Magmar.

Meanwhile Spay-C and the other two astronauts used the Command Center's time tunnel to head back to shortly after their departure and warn Earth's authorities of the future catastrophe. Whether their warnings were heeded is unknown. Issue 5