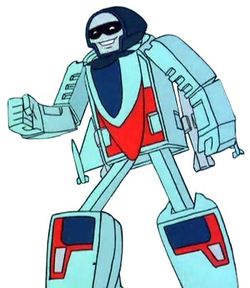 Heat Seeker is a long-serving Guardian. Despite service stretching back to at least the first Renegade revolt he remains very, very chipper.

Heat Seeker was a long-serving Guardian, a veteran of the first Renegade Revolt. He greeted the return of High Protectors Leader-1 and Cy-Kill to GoBotolis along with Zeemon and Blaster after they thwarted an attack by Parthian raiders together."Et Tu, Cy-Kill"

He remained an active Guardian and relished the opportunity to travel from GoBotron to Earth via Astrobeam to help battle Exor's army of Insectoids, saving Leader-1, Small Foot, Matt Hunter and A.J. Foster from one of the invaders as soon as he arrived. He and Small Foot then took care of the guards in the Insectoid hive, allowing the rescue of Turbo and Scooter, and then Heat Seeker used his abilities to trick two squads of Insectoids into colliding. The Guardians were subsequently able to re-open the portal to Exor's correct dimension, sending her and her army back.Invasion from the 21st Level, Part II When UNECOM's new robot Sentinel went rogue on Earth and solar flare trouble made Astrobeam travel hazardous, Heat Seeker and Blaster volunteered to go anyway to help their beleaguered colleagues. They arrived safely with the Power Suits, forming Courageous with Leader-1 and Turbo. The giant Power Warrior fought Sentinel to a standstill before the robot realised Cy-Kill had lied to it and chased the Renegades off into space. Sentinel 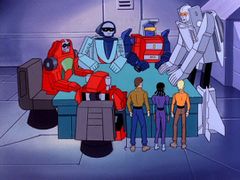 After the destruction of both the Quantico Radar Telescope and the Guardians' new sonic drill, Leader-1 set up a sting operation, splitting his troops into two teams who both thought they were carrying the new nucleonic power pack, which was subsequently stolen from Scooter, A.J. Foster and Nick Burns. Heat Seeker accused Scooter of faking the incident and being the spy. Turbo then tried to find out who the spy was by sneaking off to monitor Thruster, which then allowed Heat Seeker to cast suspicion on him, with Scooter then trying to clear his friend's name. Leader-1 then seemingly damaged the Guardians' Astrobeam, and was locked up awaiting trial. However, Scooter was able to trick Heat Seeker into revealing his true self - the Renegade Bad Boy, using an Image Simulator Circuit. He tried to escape but was surrounded by the other Guardians, who were all part of the sting. However, before he could get a much-deserved kicking the Astrobeam that brought him to Earth reversed, sending Bad Boy back to Roguestar while making his exposure largely pointless.Wolf in the Fold 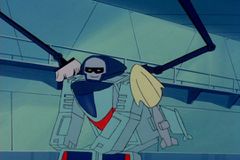 Heat Seeker was posted to a Guardian industrial outpost, providing security along with Rest-Q, Night Ranger and Scratch. Heat Seeker was wounded in the attack and Rest-Q tried to go to his aid, converting to ambulance mode and trying to carry his fellow Guardian to safety but they were attacked by Crasher. After Leader-1 and Turbo arrived to drive off the Renegades and Heat Seeker was recovered. Along with Rest-Q he was rewarded with a trip to the Spa Moon for some R and R; however, his chill was harshed when Scooter's new detection system falsely warned Spay-C of a Renegade attack, putting the moon on alert. The GoBot Who Cried Renegade 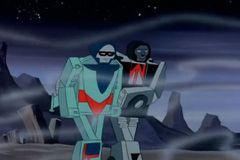 Along with Leader-1 and Path Finder, Heat Seeker helped spring a trap that captured Renegade leader Cy-Kill. While a new Modifier capable of reading his mind was improvised on GoBotron the Renegade leader was kept on the secret prison at Elba. Heat Seeker, Van Guard, Royal-T and Street Heat were tasked with guarding him. However, Cy-Kill was able to talk Royal-T and Street Heat into joining him. They attacked Heat Seeker and Van Guard; the loyal pair were able to get an SOS out but Heat Seeker was injured by the two turncoats. He and Van Guard escaped onto the planet's barren surface but were chased down by Cy-Kill and imprisoned. Royal-T tried to play down the SOS but Turbo arrived to check it out, along with apparent defectors Fitor and Geeper-Creeper. The latter turned against Turbo, who was imprisoned along with Heat Seeker and Van Guard. However, Matt had secretly sneaked along as well and freed the trio, who soon chased down the treacherous Royal-T and Street Heat. Escape from Elba Along with Staks, Dive-Dive, Wrong Way, Night Ranger and Blaster was later present with the Guardian security detail on GoBotron to detain Fitor after he was captured and delivered to Zeemon. Fitor to the Finish 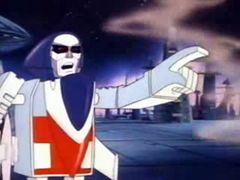 He was one of the helpless residents of GoBotron watching Cy-Kill's broadcasts after he took the population of Earth hostage and forced Zeemon to recognise him as Overlord of the planet. Clutch of Doom Heat Seeker was then present when Solitaire arrived on GoBotron, helpfully explaining that she was transforming when she transformed, then listened at the GoBotron Fortress while she and Nuggit explained the plight of Cordax. When the Renegades attacked the planet shortly afterwards he joined Leader-1 in battling the enemy above GoBotron. However, the attack was just an excuse for Cy-Kill, Fitor, Pincher and Bugsie to slip by and kidnap Solitaire. By the time Leader-1 and Heat Seeker returned to the Fortress the Renegades had taken Solitaire, Small Foot, A.J. and Nick and were able to escape by using them as shields.Battle of the Rock Lords 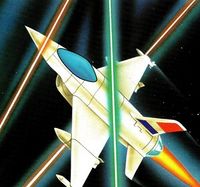 As a member of the Guardians' Earth Force, Heat Seeker was called up to be part of the assault on an abandoned mine being used as a base by the Renegades. However, by the time the strike-force arrived the base was deserted. The Secret of Silvermoon Mine Searching the nearby area for further clues, Turbo and Nick were attacked by the Enemy Invaders, so Leader-1, Heat Seeker and Hans-Cuff flew out to help them battle Vamp, Scorp and Pincher. The fight was tough but the trio of monsters were sent running when the rest of the Earth Force arrived. The Monsters and Mister Grogan Heat Seeker subsequently made a courageous assault on Pincher but was badly damaged in doing so. He was repaired in time to serve in Scooter's plan to deal with the Enemy Invaders. After getting their attention and expertly dodging their blasts, Heat Seeker led them into an abandoned quarry, where Dozer and Dumper covered them in concrete. Captain Clegg's Dream He later foiled a plan by Cy-Kill to capture the Battle Suit. Walter Wilson's Millions When a young boy named Billy Jack Jackson stumbled across the Renegades roughing up a young boy named Billy Jack in a Louisiana swamp Heat Seeker swept down to rescue him. Outnumbered, he was shot down by Cop-Tur and then rammed by Crasher, though Billy Jack escaped after evading Water Walk. However, he bravely sneaked back and rescued Heat Seeker, who then took him to meet the rest of the Guardians. Billy Jack Makes a Friend When Cy-Kill launched a fleet of missiles from Mauna Mauna Heat Seeker joined Leader-1 and Path Finder in shooting the projectiles down before they hit any of their targets, later joining the fight on the island itself as Cy-Kill's Renegade army was defeated. The Battle at the End of the Earth

During the Diaspora, Heat Seeker was dispatched to Level 77 along with an assortment of Guardians and Rock Lords. Cultural Appropriation 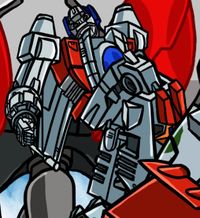 Heat Seeker was a member of the Guardian team who confronted the Autobot Spy Changers as they arrived on Strata 22. They captured Silverstreak before learning the Spy Changers were not a new form of Renegade. Brain Problem Situation

When Vec-Tor caught Sideways interfering with the Omega Locks of Old Gobotron, he imprisoned the chaos-bot with the Guardians for safe keeping. Twister was warned to keep eyes on Sideways at all times, but when Heat Seeker came to replace him, he took optics off of Sideways for a split second. In that moment, Sideways used his trans-phase mode to become invisible, and when the hapless Guardians opened the "empty" cell, he made his escape. Echoes and Fragments

Heat Seeker was one of the Go-Bots that joined Leader-1's army to face the Renegade uprising.Issue 2 Centuries later he was still serving Leader-1, now on the Command Center. Together with Blaster he escorted the newly-arrived Spay-C to an audience with Leader-1, now self-styled King of the Go-Bots. After Spay-C was sentenced to dis-integration the following day the pair hurled him into the detention center, with Heat Seeker noting that the newcomer must have really pushed Leader-1's buttons. When they came back to collect Spay-C the next morning he fought back, throwing Heat Seeker from the base's elevator. However, Leader-1 then reversed the decision when he had a visitation from Eno. However, Cy-Kill attacked soon afterwards, with Thruster chasing the Command Center into space. Heat Seeker joined the Go-Bots who converted to jet modes and battled the Renegades before the ship jumped into hyperspace. Issue 3 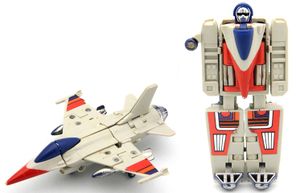 Heat Seeker was released by Tonka in the second series of GoBots, and converts from robot to General Dynamics F-16 Fighting Falcon jet fighter in 9 steps. The toy was a minor recolour of Falcon Robo from Machine Robo, featured a painted red nose and and altered wing and leg stickers (omitting any US Air Force markings) compared to the Japanese version. The colour scheme is influenced - but not quite accurate to - the scheme used by the USAF's Thunderbirds display team, who used the F-16 around the time the toy was released. Heat Seeker features an unusual transformation, with the rear fuselage splitting in half and rotating outwards to form his legs and the outer panels of his wings neatly tucking back into the robot mode - though they can be left flat to better match his cartoon appearance. The figure has limited shoulder articulation.

An unchanged Heat Seeker was included one of Tonka's Guardian Gift Pack #2 sets, with similarly unchanged versions of Rest-Q and Wrong Way. 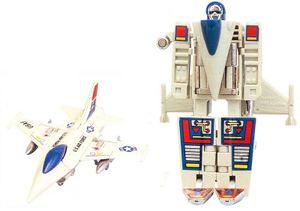 The European version of Heat Seeker saw both the GoBots and Machine Robo versions issued under the same code. Both also came with the Japanese figure's additional sticker sheet.

The figure was issued again in Europe by Bandai in 1993. This version used the GoBots red nose paint mask and factory stickers, using an updated sticker sheet modifying "US Air Force" to "RM Air Force". For trademark reasons the figure was renamed F-16. Sadly, as with the rest of the Robo Machines figures the release featured a notable drop in plastic quality and showed some signs of mould degradation.