Small Foot must take charge to foil the Renegades' plan to capture and replace the Guardians with robotic duplicates. 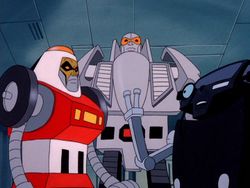 The Guardians and Renegades are in battle with one another on Earth yet again. While facing off against Crasher alongside Turbo, Small Foot is knocked off a cliff edge, but manages to save herself by using her winch to grapple to safety. Leader-1, meanwhile, trades blasts with Cy-Kill until the Renegade leader lands a hit, whereupon Snoop comes swooping in, apparently to finish the job. Leader-1 is surprised, then, when all she does is fly past without firing a shot, after which Cy-Kill calls retreat. What the Guardians have no way of knowing is that Snoop's fly-by was done so she could capture Leader-1 on video—video that Renegade mad scientist Dr. Go uses to program a robotic duplicate of Leader-1 so it can impersonate him! 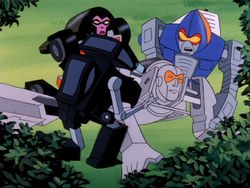 Concerned by the danger her lack of experience puts her in, Leader-1 elects to send Small Foot back to GoBotron. Subsequently, he, Turbo, and Scooter demonstrate their new "Space Bender" weapon for UNECOM; the test is successful, but the Space Bender shorts out in the process. Before repairs can be implemented, a distress call comes through from Washington, D.C., alerting the Guardians to a Renegade presence in the city. The heroes split up to search the city, but as he flies between the buildings, Leader-1 is ambushed by... himself! Stunned by his doppelganger, he is tackled by Crasher, Cop-Tur, and Dr. Go, who slip a paralyzing neural lock onto him and take him prisoner, leaving his evil duplicate to assume his place in the Guardian ranks. 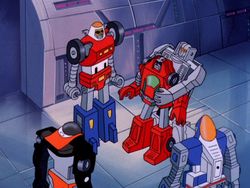 Once the Guardians have returned to GoBotron, the Leader-1 doppelganger announces that Small Foot and Scooter are to be retired from active duty, while he and Turbo go on a "secret mission." The doppelganger's abrasive personality makes Scooter and the humans suspicious, so Scooter follows "Leader-1" and Turbo on their mission, and watches with horror as the Renegades jump Turbo and replace him with another doppelganger. Scooter rushes back to inform first Small Foot, and then the humans, but Matt is concerned that Small Foot may already have been compromised. The group cautiously approaches her to ask her some questions, only to have her respond by aiming the repaired Space Bender at them... then proving her innocence by blasting the Turbo doppelganger that was sneaking up on them from behind! 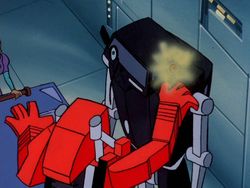 While Cy-Kill and the doppelgangers set about capturing and replacing more and more Guardians, Scooter accesses the disabled Turbo doppelganger's computer brain and learns that the Renegades are operating out of a secret base on GoBotron's Moon of Shadows. He, Small Foot, and the humans head for the moon in a Command Center, but Crasher detects their approach and fires a pair of missiles at them. Small Foot allows her to believe they have been destroyed by maneuvering the Command Center behind an asteroid, against which the missiles impact, then instructs Scooter to disguise the craft as Thruster by means of a hologram so they can safely approach the moon. Using the reprogrammed Turbo duplicate to gain them access to the Renegades' base on the moon's surface by posing as its prisoners, our heroes immobilize Dr. Go with one of his own neural locks, and locate and free Leader-1 and the other captive Guardians. They evade Fitor and Spoons to make it back to the Command Center, traversing a chasm on a tightrope made of Small Foot's winch cable when they find their propulsion systems are too weak to fly, but are confronted by Cy-Kill, Crasher, and Cop-Tur before they can board. Scooter's holograms save the day once again when he projects one of Zod, sending the Renegades scattering in fear. Cy-Kill quickly realizes that Zod isn't even on the moon, but it's too late—the Guardians have gotten away. 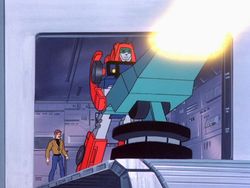 Leader-1 contacts GoBotron for assistance, but his message is also received by his doppelganger, who sends the Guardian duplicates out to attack the Command Center as it draws close to the planet. The craft is brought crashing down to the surface of GoBotron, but the Guardians survive, and immediately spring up to attack the doppelgangers as they draw close. Turbo is about to blast another approaching group, but Leader-1 stops him just in time—for the new arrivals are the real Zeemon, Hans-Cuff, and Rest-Q, here to aid their comrades! The fight that follows is a confusing one, as the Guardians have trouble telling friend from foe, but Small Foot has the answer. She recovers the Space Bender from inside the Command Center and turns it on the doppelgangers, shutting down their computer brains as she did to Turbo's copy earlier. The Leader-1 duplicate is the last one left standing, but manages to blast the Space Bender before it can hit him. Back in fighting shape, the real Leader-1 takes on his clone in mid-air combat and emerges victorious, blowing the duplicate to bits, and forcing the defeating Renegades to withdraw. In the aftermath, Leader-1 commends Small Foot for saving the day, and welcomes her back onto his Earth team. 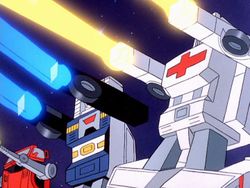 "Let's show them what real Guardians are made of!"

—Zeemon leads the charge into battle 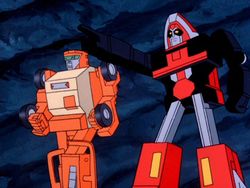 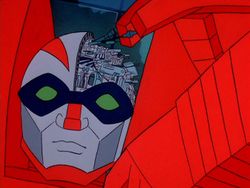 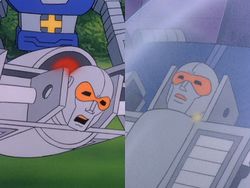 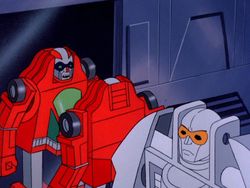 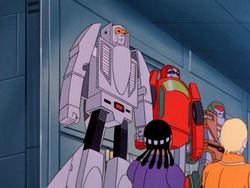 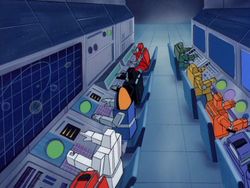