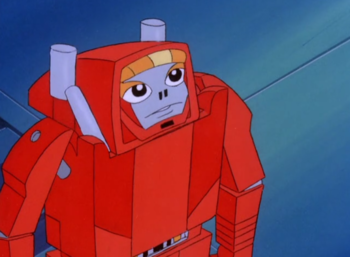 Scooter doesn't much like fighting. Unfortunately for him, his hologram projector makes him an indispensable member of Leader-1's team, meaning he ends up on the front lines more often than he'd like. 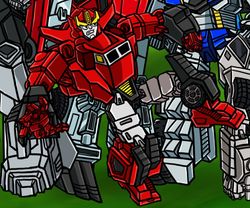 During a dimensional incursion, the Guardians captured the Autobot Spy Changer named Silverstreak, believing him to be part of a new group of Renegades. Silverstreak was able to convince Scooter and A.J. of his good intentions, leading the Guardians and Spy Changers to join forces against the Renegades and stop the Moebius effect. Brain Problem Situation

Sideways and Gong began playing with universal streams, causing elements of the GoBots and their history to merge with a Transformers universe during the first encounter with Unicron. As a result, Bumblebee and Spike Witwicky were intermittently replaced by Scooter, Matt, and Anya aboard Moonbase Two during Unicron's approach to Cybertron. Echoes and Fragments 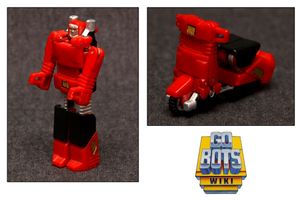 An import of Machine Robo Scooter Robo toy, Scooter transforms from a robot to a, well, to a scooter. He features die-cast metal parts. Fortunately (or unfortunately, if you just really love his animation model), his face does not magically shift to the space between his handlebars. The foil stickers on his chest are commonly missing on loose specimens (including the one pictured at right). His vehicle mode does not have true rear wheel, only a molded ridge where it should be and two small, plastic rollers to either side. Scooter was released in the first series of GoBots figures in 1983 and was reissued in the second series in 1984 with a holographic sticker.

The first toy from the third wave of figures, Motor Scooter Man was released by Bandai Australia in 1983. He remained identical to the original Scooter Robo toy, albeit packaged on a blue backing card.

A carded repackage of Scooter Robo, the figure now known simply (and ironically in hindsight) as Scooter was released by Bandai Europe in 1984. He was popular enough to be reissued in 1986 unchanged beyond an updated toy catalog. 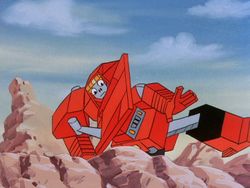 WhY mY ShOuLdErS hUrT?