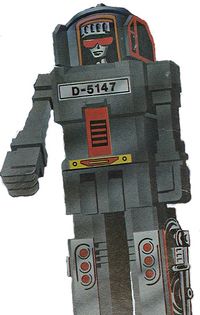 Loco is a Renegade. Choo-choo! 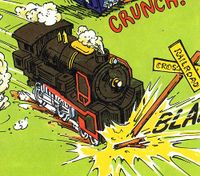 The zany Loco was one of Cy-Kill's goons on GoBotron, where they were imprisoned by Security Forces led by Leader-1. Cy-Kill taught his troops to change their form - with Loco becoming a steam train - and plotted an assault on Earth, long watched by GoBotron's scientists. They broke out and escaped the planet on a huge flying saucer before going on a rampage on Earth, where Loco personally flattening a railroad crossing sign that was in the middle of a field for some reason. However, two enterprising young scamps named Pete and Nancy then hacked their computer systems by accident, resulting in the Renegades malfunctioning - with Loco going round and round in circles before being chomped by Zod. This allowed Leader-1 and his troops to track the Renegades before forcing them into a retreat. Escape to Planet Earth

Loco was involved in the first Renegade revolt and was based at Xeros with Zero, Bugsie and Klaws when they detected the approach of the Guardians Cy-Kill, Dart and Bullseye. The Renegades were able to ambush the Guardians, starting a chain of events that would lead to High Protector Cy-Kill defecting to the Renegades."Et Tu, Cy-Kill" He would act as one of the defenders of the Renegade Fortress when it came under Guardian attack following the theft of their new Astrobeam Earthbound but was later captured along with the rest of the garrison. The Final Conflict Loco later got free, possibly when Cy-Kill instigated a mass break-out on GoBotron's Prison Moon. After the Renegades took control of the planet he was tasked with guarding the Modifier inside Dome 7. Turbo, Scooter, Small Foot, Sparky and their other allies targeted it for components to repair Leader-1 and while the Guardians were busy fighting Slicks, BuggyMan and Geeper-Creeper outside, Loco was inside and stepped confidently out to confront their allies Matt, A.J., Nick and the Last Engineer. However, his grand-standing was soon undone when the Lost Engineer simply shot him with an energy blast from his cybernetic hand.The Fall of GoBotron 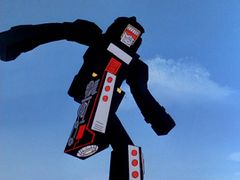 Along with Crasher and Cop-Tur he was tasked with intercepting the train transporting UNECOM's new Disruptor as part of a plan Cy-Kill devised alongside the mercenary Trident. They easily overwhelmed the escorting Small Foot and Loco towed the carriage containing the device, Matt Hunter and General Orlando to Trident's volcanic island base. When Nick and A.J arrive over the island to investigate the energy flares the Disruptor is causing Loco shot down their plane, allowing the pair to be captured. However Leader-1, Turbo and Small Foot arrive soon afterwards and Matt takes control of the device, using it to teleport the Renegades to the Crescent Nebula.Trident's Triple Threat Loco was part of Cy-Kill's scheme to capture the psychic Mira Shaw, the group setting up a secret base at a carnival. After they swiped Mira from her hotel he acted as their getaway vehicle, towing the rest in some carriages, possibly just to make Loco feel useful. However he was rammed off the tracks by Turbo and Mira was saved by the Guardians, forcing yet another Renegade retreat.Renegade Carnival 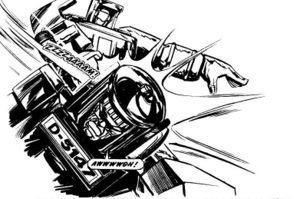 Loco had a short but event-packed life. He was the first - and ultimately only - Renegade created for Stron-Domez at Westbridge, with the work done by the captive employees of Datafile Electronics. Loco was subsequently assigned to guard the loading bay where the enslaved humans were sleeping, unobtrusively doing so in train mode. When the Security Forces Robo Machine Night Ranger sneaked the human Charlie Bampton into the factory to find where the workers were being held the boy's ESP tipped him off to the real nature of Loco anyway. Charlie was able to spot the workers but accidentally alerted Loco when he fell off a stack of boxes. Loco transformed and blasted the boxes with powerful eye-beams but missed the boy and was subsequently called off by Stron-Domez, who assumed the noise was caused by a cat. Charlie was able to return to Night Ranger and inform the Security Forces of what he had found. He later slipped back in disguised as the driver of Truck. Once inside the factory Truck rammed Loco at full speed, knocking him over. The Renegade switched to robot mode but Truck did the same, knocking Loco out and freeing the humans. Loco recovered as the Security Forces undertook a full-scale assault on the factory. Furious, Loco called out to Truck demanding revenge but the SF Robo Machine had sneaked up behind the Renegade and blasted him in the solar plexus at point-blank range. Loco was subsequently captured and deactivated onboard the Command Centre.The Robo Machines, Story 1

The events of his creation, capture and deactivation were relayed to the citizens of Robotron in a news broadcast.The Robo Machines, Story 2

Loco was one of the Enemy Machine Men from Robotron who joined Cy-Kill in targeting the peaceful planet Earth for conquest. Along with his comrades, Loco soon forced the Friendly Machine Men into a retreat while causing huge destruction. However, they regrouped and counter-attacked.Space Wars

Loco was one of the Renegades at Silvermoon Mine, beginning work on what would become Zod, when Leader-1 arrived overhead. The Renegades chased the Guardian leader away with ground fire, and by the time he returned with the Guardian Earth Force they had cleared out. The Secret of Silvermoon Mine His locomotive mode was later used to transport the captured humans Anya Turgenova and Boris Bulkanikov to use as leverage and get hold of the Guardians' new Battle Suit. However, Turbo was able to trick Crasher and Cop-Tur, getting the hostages free without handing over Battle Suit. The Capture of Comrade Boris He later travelled to Mauna Mauna via Astrobeam as part of the large Renegade army gathered on the island by Cy-Kill but Leader-1 was able to gather the full strength of the Guardians and force them to retreat. The Battle at the End of the Earth 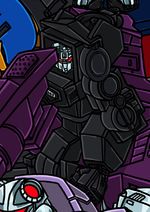 During the Diaspora, Loco was dispatched to Level 29 along with an assortment of Guardians and Renegades. Cultural Appropriation

Loco was responsible for recruiting the Malgus Cluster expatriate Stretch into the Renegades after his Modifier form business dried up. Ask Vector Prime 2015/09/29

Loco and Vain Train spied on the Robo Rebels at a dude ranch in Utah, accidentally learning about the legendary Fountain of Youth on the grounds. Loco pumped the fountain dry to test its waters, and discovered the secret of its temporal powers. He formulated an anti-chroniton agglutination that prevented any aging or changing to his super-structure, preserving it eternally and therefore making him practically invulnerable. Flush with power, Loco attacked the Robo Rebels and reveled in his invincibility. Hoping to prove his worth and oust Crasher from her position in Cy-Kill's command team, Loco refused to share his power with Vain Train and launched a solo assault on the dude ranch. The ranch was fortified with a variety of traps and snares that kept him occupied, however, until Super Couper and Tail Pipe recovered a sample of the agglutination to neutralize it. Raizor challenged Loco to an old-fashioned Western duel in the streets, and Loco was surprised the Guardian not only outdrew him, but that his invulnerability failed him. Humiliated and literally hog-tied, Loco was only rescued by Vain Train and fled. Going Loco When Cy-Kill ran for President of the United States, Loco conducted a whistle stop campaign throughout Illinois. Cy-Kill For President

When a raid on a Guardian communications hub went bad, Cy-Kill was particularly harsh to his troops. So, when the Master Renegade appeared offering Power Suit upgrades to the Renegades if only they made him leader, Spoiler, Fly Trap, Loco, and Screw Head eagerly turned on Cy-Kill. Using the P2 suit, Loco gained incredible strength. Eager to test their might, the Power Suited soldiers and the Master Renegade launched a direct assault on the Gobotron Fortress. When the time came to form a dark copy to battle Courageous directly, however, the "united" Renegades couldn't agree on who should control the combiner. The hobbled "Grungy" was easily beaten apart by Courageous, and the Renegades meekly limped back to Cy-Kill, begging for his good graces. Coup de Grunge Although the Master Renegade fled in his Power Ship, Spoiler's scans of the vessel were used by Dr. Go and Tic Tac to recreate the technology, forming a tank and a new Power Warrior design called Nemesis. For some reason, Loco was allowed to wield the Power Suit technology again, joining a new crew of Block Head, BuggyMan, and Decker Decker under Cy-Kill's direction. Combiner Wars Part 1

As Sideways and Gong played with mixing universal streams, the Renegades staged an all-out assault on Autobot City on Earth. Loco was one of the Renegades fighting to breach the Autobot defenses. Echoes and Fragments 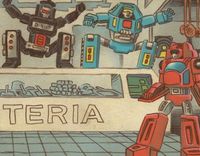 Loco was one of the rogue Go-Bots who joined Cy-Kill's rebellion against mankind. When Leader-1 arrived to put down the Renegades, Loco helped to mob him - allowing Tank to extract US military secrets from his head. Issue 1 When Cy-Kill ordered a full-on offensive against humanity Loco and Geeper-Creeper amused themselves by lobbing a human from base to base on a baseball field. Later he watched as Cy-Kill tortured Scooter while a distressed Matt and A.J. looked on, before joining in the face-off against Leader-1's own army of Go-Bots.Issue 2

Over the next very, very, very long time Go-Bots became the dominant species on Earth, building their own planet Gobotron around it, with Leader-1 and Cy-Kill remaining locked in conflict. Loco stayed with Cy-Kill's faction and was part of his entourage when they followed the Guardians back to the half-forgotten planet. Issue 3 He was later one of those sent to stop a fighting-mad Turbo after Cy-Kill stole the Command Center and captured Scooter. Turbo seemed to think a showdown with Loco had been a long time coming, and when the Renegade and Tank jumped him in the cafeteria he was in little mood for nonsense, having just set Fitor on fire. Loco shifted to his train mode but Turbo simply hefted him into the Command Center's De-Materializer, seemingly disintegrating him to Tank's horror. However, Major Mo later revealed that the thing was apparently a time tunnel somehow, and Loco had in fact been sent back to the Old West, where he found work as a train. Choo-choo indeed.Issue 5 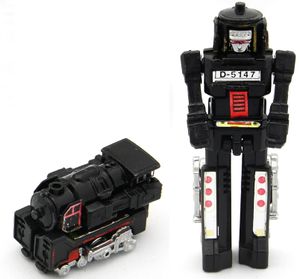 Loco was released by Tonka in the first series of GoBots, and converts from robot to JNR Class D-51 steam locomotive engine in 3 steps. The toy was a repackaging of Steam Robo from Machine Robo, with no significant changes; the figure had previously been issued in America as part of the Machine Men range, named Train Man. Loco has a simple transformation but a surprisingly well-proportioned robot mode which belies his small train mode. He has articulation in the shoulders and the hips, though he's difficult to balance with the latter move. He can can-can, though, so what more can anyone ask for?

Loco was planned to be included in a Gift Pack along with Crasher and Stallion which was advertised in the 1985 Tonka catalogue but was ultimately not released.

A carded repackage of Steam Robo featuring a new starfield-style background, Train was released by Bandai Europe during the latter half of 1983. 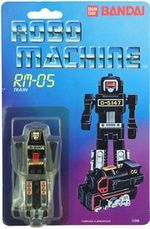 The figure was later re-released as part of the second wave on a blue backing card. While the GoBots name for the character was later used in promotional material the toy's packaging was never updated.

The fifth toy from the original six figure wave, Train Man was released by Bandai Australia during the second quarter of 1983. He remained identical to the original Steam Robo toy, albeit packaged on a blue backing card.