Old ways die, new leaders arise, and the shocking destiny of the Go-Bots is revealed. 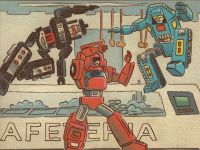 The chase is on over Earth, as Turbo gets a lift from Spay-C's shuttle mode to pursue Cy-Kill, his Renegades, and their captive Scooter in their stolen Command Center. The determined Go-Bot is able to punch his way into the vessel, and deals with Cy-Kill's retinue one after the next: dousing Fitor with volatile liquigen fuel, downing Tank in the ship's cafeteria, overpowering Loco and hurling him into the Disintegration Chamber, where his body disappears in a flash of light. Meanwhile on the ship's bridge Cy-Kill seeks to understand the full scope of Leader-1's duplicity; having gained access to the Enemy Re-programming Center, the Renegade leader has come to understand that nothing on Gobotron is as it seems: all Go-Bots, including himself, have had their minds wiped and reset, their bodies disintegrated and regenerated - all to preserve Leader-1' s despotic rule over Gobotron. Not far away, Turbo and two of the human astronauts are conducting their own investigation of the re-programming center, and Turbo is briefly struck by a flash of memory, of Scooter's own traumatic experience. Curiosity overrides his better urges, and despite himself Turbo calls up the files to learn the truth of what happened that fateful day... and learns, much to his horror, that Scooter had consented to the process due to his traumatic memories, and it was Turbo, unaware of this, who yanked him out of the machine early and damaged his friend's mind. Seeking to plumb the full depths of the truth about their civilization, an impatient Cy-Kill is more than ready to start testing the reprogramming center on his captives, both human and Go-Bot. Their worries are cut short when an enraged, vengeful Turbo crashes through the doors and opens fire on the group, his shots taking the rest of Cy-Kill's inner cadre out of action and sending Crasher fleeing.

Having escaped the depredations of Leader-1 long ago, Turbo is one of the few Go-Bots not to have had his mind erased, and though Cy-Kill tries to assure his foe that he will be a better leader for Gobotron. Turbo warns him that the only way their civilization can go forward is if Cy-Kill shuts down the Command Centers, the memory wipes, the myriad deceptions and lies of Leader-1. But then Turbo spies Cy-Kill's human prisoners on the testing slab and a struggle breaks out, and Turbo finally puts Cy-Kill down by shooting him through the eyes, destroying his head. In his last moments, Cy-Kill flashes back to the moment of his creation, which set him on the path he followed for the rest of his life: his creator telling him that his function was to be a motorcycle for his fellow Go-Bot servants to ride. The threat vanquished for the moment, Turbo springs Scooter from prison, and the two dodge their way past laser grids and other defense measures to take control of the Command Center - only for Crasher to bar their way. But Turbo is done with fighting, and simply tells the Renegade warrior that he just wants to go home. The war is over, and what to either of them stand to gain by carrying on the old hatreds that their leaders perpetrated? Crasher gratefully accepts, and the two of them fly the Command Center and the Thruster back to the surface of Earth, to rendezvous with the other Guardians. 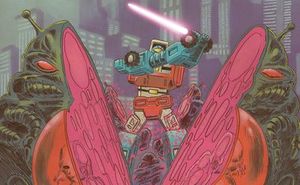 As they disembark, Turbo announces that it's time to rebuild their society and forge a new world that's truly their own, not the simple imitation of old Earth culture that Leader-1 clung to. Turbo invites the four human astronauts to stay on Gobotron, should they choose to abandon the ruins of Earth, but Leader-1's old right hand 'bot Major Domo reveals that there's another way home: the so-called "Disintegration Chamber" is, in fact, a time tunnel capable of sending Spay-C and his crew back to their own time period. Two of the astronauts choose not to make the trip; rather, they will stay on Earth in the hopes of teaching the primitive humans to rebuild civilization. As the rest of the Go-Bots board their respective ships and take off, Turbo looks back over his shoulder to see the two astronauts spelling out the message "GOODBYE GO-BOTS." The crew return to Gobotron to find that the planet has changed greatly during their voyage, noting that the planet's roads and buildings have been ripped to shreds. It doesn't take long before the culprit reveal themselves: none other than a horde of Vamps, who quickly swarm over the Command Center and send it crashing to the ground. Their gloating leader, Professor Braxis, effuses at his triumph only to be felled from behind by the mighty Road Ranger, who contemptuously cleaves the mad doctor in half before turning his fury on the army of Vamps. With them gone Road Ranger reveals that he's had help from "the forgotten:" those young new Go-Bots who have never known Earth, and also the towering forms of Bug Bite, Baron Von Joy, Destroyer, Zeemon, and Staks, mighty titans larger than any other Go-Bot. Road Ranger reveals that his convoy are marching towards Gobotropolis, capital of Gobotron, so that he can claim the crown and inherit control of the planet, and invites the stragglers to join him on this quest. The Go-Bots immediately takes a liking to this new leader, and even Turbo can only admit that the next generation is taking over: a statement made all the clearer as Road Ranger orders his Go-Bots to "transform and roll out!" 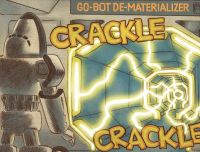 That evening, Turbo says his goodbyes to Spay-C and his two crewmates, who have opted to make the trip back in time. Turbo, content to let Road Ranger take the wheel for a change, chooses to shut down for a time... and as he drifts off, he dreams of his old friends Matt Hunter and A.J. Foster. Flanked by the other Go-Bots, Spay-C and his human friends approach the time tunnel, and after double-checking their coordinates the trio vanish in a flash of light. Path Finder wonders what will become of the three heroes, and Small Foot responds that they'll never find out; even if their actions somehow prevent this current timeline from coming to pass, the people of Gobotron will have no way of knowing. Unbeknownst to all, Loco has peacefully settled into life in the Wild West, posing as an ordinary steam locomotive. In Gobotropolis, Road Ranger, now the new leader of Gobotron and its people, is inaugurated before a cheering crowd. He denounces everything that Leader-1 held dear, including his irrational attachment to the organic world that birthed him and their kind. Road Ranger decides that it is time for the Go-Bots to embrace their potential as a species and find their true place in the cosmic order. So it is, on Road Ranger's command, that Gobotron itself transforms for the first and last time; as the barricaded shell around Earth unlocks, the metal planet hurtles into deep space, leaving Earth and its people behind. Below, humans and Rock Lords watch the retreating shape of Gobotron before turning to focus on their own destiny. Setting sail from the "Valley of the Rock Lords", the humans set about rebuilding civilization one step at a time, under the watchful eye of those Go-Bots like Dive-Dive who have chosen to stay on Earth, now protectors of humanity. One such guardian comes to their rescue while exploring the ruins of a distant acropolis; beset by the monstrous Magmar, the malevolent Rock Lord is himself defeated by Screw Head, who pledges to assist humanity as they rebuild. 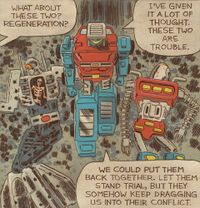 As Gobotron flies through interstellar space, Road Ranger outlines his plans for the next step of their evolution to his consort Bug Bite. The dawn of their new era will coincide with the mass production of new Go-Bots and Gobotrons, seeding the cosmos with new mechanical worlds and robotic lifeforms. Road Ranger has already begun on the first of these new Go-Bots, an "heir" that is a faster, stronger version of himself, a mechanical "son" that Road Ranger regards as an "optimized" version of himself. Road Ranger recommends that Bug Bite do the same, but when the yellow Volkswagen inquires as to the fates of Cy-Kill and Leader-1, and whether or not they too will be regenerated, Road Ranger declines; the two have proven to be far more trouble than they're worth. Instead, their parts will be combined into a single new Go-Bot, one that will hopefully embody the best traits of both leaders. As the new robot - a red, white, and blue F-15 jet - takes shape, Road Ranger hopes that this experiment will turn out for the best.

And, in the present day, Spay-C and the two humans have returned to their own time period, in the last days before the original Go-Bot uprising that spelled doom for humanity. But although they're armed with the knowledge of the dark timeline that will come to pass, their mission to change the past isn't so successful; their superiors are unwilling to listen, arrogantly convinced that renegade Go-Bots can be easily rounded up and decommissioned--just as an alert comes through warning that the Go-Bot motorbike Cy-Kill has recently gone rogue. Astronaut Charlotte Scott's mention of "Gobotron" piques her commander's interest, however, as he knows "Gobotron" as a simple autonomous space station run by the Go-Bots. Charlotte warns him that if humanity is to survive, they need to shut it all down before the Go-Bots rise up...

Characters in italic text appear only in visions.

"Once so haughty... now an utter buffoon. You don't even know what I'm talking about, do you?"

"The freaks shall inherit the Earth."