Tank is a Renegade.

Tank was a member of the Renegades bunkered down in their fortress as the Guardians lay siege to their position. Battle for GoBotron Cy-Kill later summoned him to Earth via Astro-Beam. Tank assisted Cop-Tur and the mesmerized human military in hunting down Turbo and Scooter, the only active Guardians left on the planet. In a major city, Tank's guided energy blasts seemingly destroyed the duo by collapsing a subway on them. As the Astro-Beam reverted, Tank returned to the siege on the Renegade fortress. he reassured Fitor that while they may have lost the battle on GoBotron, Cy-Kill was prepared to win the war. Earthbound

Tank was one of the Renegades who assisted Fitor in searching for Cy-Kill when the overlord's Thruster went missing. Gameworld

Destroy All Guardians The Third Column 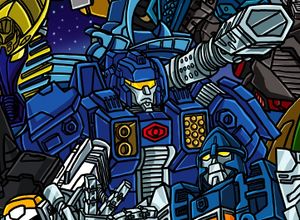 During the Diaspora, Tank was dispatched to Level 44 along with other Renegades as well as the RoGuns. Cultural Appropriation

Tank and Block Head were responsible for guarding Anya Turgenova for the Renegade's Space Hawk project, but Scooter and Tail Pipe managed to sneak by them. The Hawks of Space Part 1

Tank joined Crasher and Hornet in attacking UNECOM to destroy one of their experimental aircraft. Bears and Bulls

Tank was one of the Renegade liaisons to Greenbeard and his pirates. He unwittingly allowed Leader-1 and the Guardians to stow away on his vessel to find the pirates' hideout. Space Pirates of the Helix Nebula

When the Autobot Spy Changers arrived on Strata 22, Tank was one of Cy-Kill's Renegades who helped drive off the Guardians during a misunderstanding between them and the Spy Changers, and tried to forge an alliance with the dimensional invaders. Brain Problem Situation

As Sideways and Gong played with mixing universal streams, the Renegades staged an all-out assault on Autobot City on Earth. Tank was one of the Renegades fighting to breach the Autobot defenses.

Later, after Zero tossed the injured Megatron out of the fleeing Astrotrain, the Renegades began debating their new leader. Tank scoffed at the idea of following an egghead like Dr. Go, and a power struggle broke out between various candidates. Echoes and Fragments 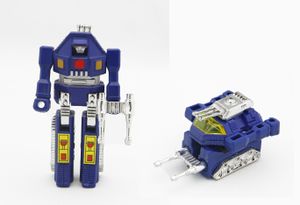 A repackaged release of Popy's Battle Robo from the Machine Robo line, Tank converts from robot to futuristic siege vehicle, a GoBotic Pulverizer Mark VII tank according to Cy-Kill.

The second toy from the original six figure wave, Tank Man was released by Bandai Australia during the second quarter of 1983. He remained identical to the original Battle Robo toy, albeit packaged on a blue backing card.

A carded repackage of Battle Robo featuring a new starfield-style background, Tank was released by Bandai Europe during the latter half of 1983. The figure was later re-released as part of the second wave on a blue backing card.