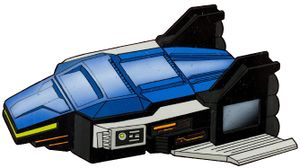 For when Screw Head is too subtle a name

The Thrusters serve as warships and headquarters for the Renegade fleet. Through the use of their Stealth Device, they can fly completely silent and invisible to both sensors and the naked eye. This device gives the Renegades their greatest advantage in the war with the Guardians. 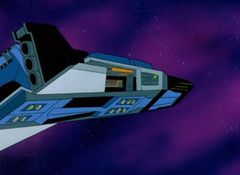 The Thruster was produced in large numbers by the Renegades, though it was rare for more than one to be deployed at the time. While the Thruster has the range to fly from GoBotron to Earth Battle for GoBotron it is more normally used as a shorter-range shuttle from the flagship Roguestar. Its' built-in Stealth Device makes it ideal for the various underhand machinations of Cy-Kill, usually with Crasher and Cop-Tur joining him, as it could easily sneak onto Earth without detection. The ship can travel in hyperspace, land vertically Target Earth, has numerous scanning devices and is well-armed. When it comes to combat it is a fair match for the Command Center, though with the ace of being able to slip away invisibly when the battle turns against it. However, many of its' secrets are known to the Guardians, to the extent that a highly convincing simulator is in use at the Guardian Academy. "Guardian Academy" 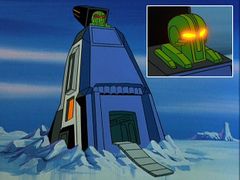 On occasion a large number of Thrusters were deployed, such as when the Master Renegade's Transgressor gave the Renegades the advantage they needed to take control of GoBotron The Fall of GoBotron, for a massed attack to humiliate Leader-1 (though most of the fleet was wiped out after being led into a trap) Mission: GoBotron and for a smash-and-grab raid to kidnap Solitaire in order to gain control of the Ultra Scepter Battle of the Rock Rocks. Like its' opposite number Thruster can be piloted by a single Renegade if required Mission: GoBotron. Thruster also has the ability to land end-up and convert to a base Target Earth, though it was rarely deployed in this configuration. Some can project video from the underside for propaganda reasons. The Fall of GoBotron Thrusters also have cells onboard Wolf in the Fold, and a Brainstormer. The Gift 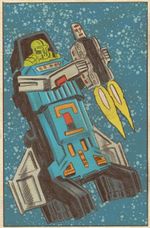 After the Command Center escaped the combined might of an army of Renegade Go-Bots and Zod, Cy-Kill produced the Thruster, loading the Renegades onboard. The ship was able to overhaul the Guardian craft before converting to a robotic configuration, grabbing the Command Center with its' massive arms. However, its' prey unleashed its' full afterburners on Thruster it moved clear and was able to escape into hyperspace, before doubling back to the far side of Gobotron.Go-Bots #3 However, Thruster was able to track it as it travelled to the organic core of the planet—the long-forgotten Earth. After dropping off Zod and the other Renegades, Thruster played no further part in the battle.Go-Bots #4 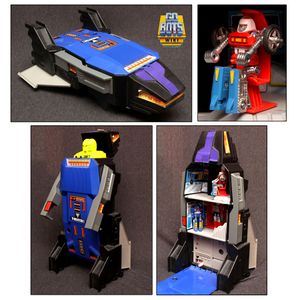 One of several toy concepts designed by Tonka exclusively for the GoBots toyline, Thruster serves as a vehicle, playset, and gigantic Renegade soldier. In ship mode, Thruster rolls freely on four plastic wheels and is decorated with the title "THRUSTER 1" (possibly alluding to the presence of multiple Thrusters in Challenge of the GoBots) and the seldom-seen Renegade faction symbol. In its robot mode, Thruster gains a spring-loaded "gripper hand" which can hold most basic-sized GoBot figures. Standing Thruster on its thrusters and opening the front panel converts it to battle station mode. Like the Command Center, most of Thruster's interior details are represented by paper labels.
Inside, Thruster features three levels.
The craft featured in its' own toy commercial. 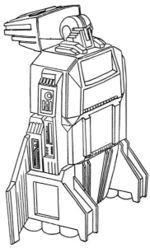