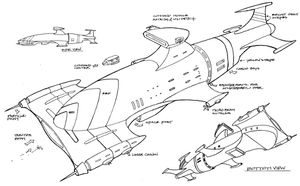 Roguestar (or Rogue Star) is the flagship and mobile base of operations for the Renegade movement. This colossal vessel can hold off a fleet of Command Centers or lay siege to GoBotron itself. It employs Astrobeam technology to dispatch Renegade agents throughout the galaxy and is equipped with a scaled-up version of the Stealth Device, making Roguestar undetectable to the Guardians until it's time...to strike! 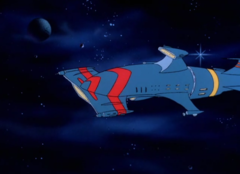 "I'm just a big fish in the giant sea of space."

Construction of Roguestar was near-complete around the time the Renegades' final outpost on GoBotron fell, being the base from which Dr. Go helped Cy-Kill and other captured Renegades from custody on the Guardian Prison Moon. Cy-Kill's Escape After Cy-Kill and key lieutenants Fitor, Crasher and Cop-Tur were brought onboard the Guardians unwittingly freed the Master Renegade from exile on Antares III Quest for the Creator; with his Transgressor technology the Renegades made a full-scale assault on GoBotron, spearheaded by Roguestar, which acted as a mothership for the fleet of Thrusters deployed. The Guardians' defences were overwhelmed, with Leader-1 shot down and captured, most of the Command Center fleet knocked out and numerous Guardians injured or captured, leaving GoBotron in Renegade hands. The Fall of GoBotron The huge ship remained in orbit as the Renegades tried to stamp out the last few resisting Guardians Flight to Earth. After escaping to Earth the Guardians made a desperate attack on Roguestar with their new Power Suits. Despite the arrival of the Last Engineer allowing the Guardians to form the Power Warrior Courageous their most potent weapon was the Master Renegade, who pulled an ill-timed coup against Cy-Kill before botching the defence; by the time the Renegade leader regained control many Thrusters had been destroyed, and he ordered Roguestar to switch on its' stealth device and withdraw, ceding GoBotron to the Guardians. Return to GoBotron 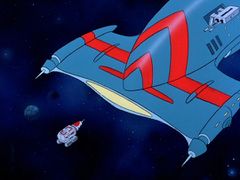 Despite this setback Roguestar was completed and would continue to be a major thorn in the side of the Guardians and their UNECOM allies, due to its' ability to cruise through the solar system undetected and launch powerful Renegade attacks without any warning. Its' only weakness was its' lack of hyperspace ability, and a Renegade attempt to create fuel that would allow it to do so from varium ore was thwarted when the Guardians destroyed the Renegades' mining operation. Cy-Kill's Cataclysmic Trap It was briefly drained of power when firing the Nova Beam devised by Doctor Braxis, and the weapon ultimately had to be jettisoned after this helped the Guardians track the ship. Nova Beam Later the ship was infiltrated by both the Guardians and Exor's insectoids Invasion from the 21st Level, Part I, which briefly fell into the hands of the other-dimensional creatures. Ultimately its' weaponry would help weaken Exor enough that she could be returned to her own dimension. Invasion from the 21st Level, Part II

After being a launch point for a string of successful near-Earth raids the Guardians decided to make a decisive attack on Roguestar. While a team led by Leader-1 were able to get onboard the ship and plant an L-Ron detonator onboard the Renegades were able to void the device into space in the nick of time. The Quest for Roguestar Zero briefly controlled Roguestar during his uprising against Cy-Kill, but after his movement was defeated it returned to the restored Renegade leader. The Third Column A second usurping saw Leader-1 - in a personality-inverting exo-suit - set himself up as new Renegade leader. He was returned to his normal self and led a Guardian team who nearly took control of the Roguestar but the Renegades were able to jettison the ship's bridge and regain command of the ship. A New Suit for Leader-1 The Guardians once again tried to take action to neutralise the threat of the ship, recruiting the mentally inconsistent disgraced scientist Doctor Braxis. He devised a string of satellites to detect Roguestar; they failed in their designed purpose but actually initiated molecular breakdown of the ship, causing an evacuation. The Renegades seized Braxis and made him work with Dr. Go to restore the ship, which they were successful in doing. Braxis Gone Bonkers The Master Renegade was held in a cell onboard Roguestar under guard, but Vamp and Scorp were able to knock out Stretch and free him. Quest for New Earth