Not one, but two, groups of GoBots deliberately ask Doctor Braxis for help. Let's watch. 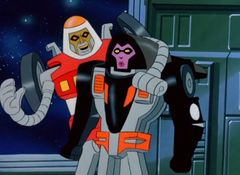 Sparky and Staks are towing a convoy of surveillance equipment by Command Center to Earth when they're jumped by Fitor, Cop-Tur and Crasher in Thruster, as Roguestar was able to stalk the Guardians in stealth mode. Unable to manoeuvre with the cargo they jettison the load, which the Renegades gladly collect - as the materials will be perfect for the new base they're building on Titan. On Earth, Professor Von Joy is unable to make any headway in neutralising the stealth device, so Matt suggests they ask Doctor Braxis for help. Leader-1 considers him too dangerous but after Sparky calls in with news of the latest raid he relents. Braxis is being kept in a maximum security mental hospital, where he is making all sorts of strange machinery to "prove" himself to UNECOM. General Newcastle is unsure about releasing Braxis but Leader-1 feels it is their only choice. Both Nick and a dismissive Professor Von Joy are also unimpressed. Seeing Matt seems to snap Braxis out of his delusions to some degree, especially when he hears his help is needed. Matt offers to have him reinstated at UNECOM and, while still unstable, he accepts. Meanwhile the recovered components arrive at Roguestar, where Dr. Go wants to finish the new base. Nevertheless Cy-Kill is furious the convoy crew were able to escape and chastises Crasher, Cop-Tur and Fitor - though his mood is soon improved as they arrive above Titan. 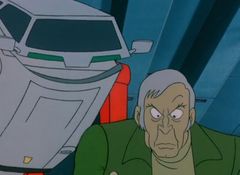 Braxis arrives at UNECOM Headquarters, where his odd behaviour and lack of tact soon starts annoying everyone. In between his less coherent moments he seems to be making progress though, creating an array of satellites that will nullify the Renegades' stealth devices. He says the Renegades will need to be lured into firing their energy weapons to complete the work however, so Turbo, Scooter, A.J. and Nick are put on a convoy as bait. Roguestar picks up their faked transmissions. However, Leader-1 has unwisely left Braxis in Professor Von Joy's care and he predictably immediately loses the human. He reappears having mistaken the Professor's energy transducer for a toy, though Matt is able to catch it before they're all destroyed. However, Braxis skips off again, meaning Matt and the Professor have to find him to activate the satellites while the convoy comes under attack. Thruster's first pass damages the the coupling to the cargo pods, making the hyperspeed impossible. 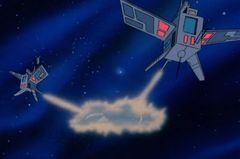 Luckily Scooter is able to get the ship moving fast enough for Roguestar to hit the pods, allowing the ship to escape, while Braxis has been found and is able to activate the satellites. However, they malfunction - while Matt, Leader-1 and the Professor believe it hasn't worked and return Braxis to imprisonment it in fact begins disintegrating Roguestar's molecular structure. He takes Crasher to Earth to find out what's behind it, ordering Dr. Go to evacuate everything on the ship to Titan. Cy-Kill soon finds out Braxis was behind the satellites and has him abducted. Back at UNECOM Headquarters news of the kidnapping reaches the Guardians, while Matt has detected strange energy readings near Titan. Leader-1 pieces together what's happened and takes Turbo, Sparky and Scooter to investigate in the Command Center. Meanwhile Cy-Kill arrives back on Roguestar with Braxis, setting him to work with Dr. Go on undoing the molecular breakdown. The Guardians arrive and follow Thruster down to Titan, beginning an attack, and battle is joined. Braxis meanwhile moves Roguestar back among his satellites. Fitor soon shoots down Leader-1 but Turbo is able to ram one of the base's turrets only to be shot by Cy-Kill, while Crasher rams Sparky off the road. However, as Braxis and Dr. Go have stabilised Roguestar Cy-Kill orders a retreat to Thruster. Leader-1 settles for neutralising the base on Titan while Cy-Kill returns to Roguestar - only to learn from Dr. Go that Braxis has vanished, having stolen a shuttle and escaped.

"Ach, ze impertinence. In ze old days, ve had vays of dealing with his type." 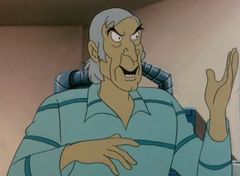 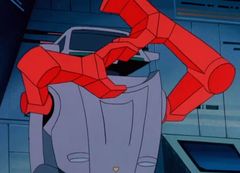 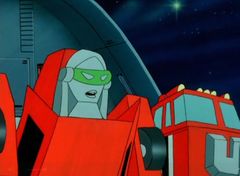