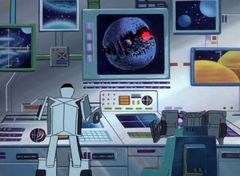 Small Foot is held at gunpoint by the treacherous Master Renegade. Crasher boards the Command Center to collect the Master Renegade and Turbo is able to blast her into the GoBeing, sending them both skittering out of the airlock into the Renegade shuttle. Scooter jumps to the controls of the Command Center and the Guardians escape to GoBotron to inform the Guardian Council. The Council reacts with panic but Zeemon is more practical, and orders the Guardians to go to Stage 6 Renegade Alert. Meanwhile the Master Renegade's weapon has done considerable damage to Small Foot, causing her transform circuits to totally vanish. Rest-Q tells Matt, A.J. and Nick that her circuitry looks as if she had never even been put through the Modifier. Matt suggests putting her through the machine a second time. Professor Von Joy sets the machine up and the process is a success. However, Roguestar has finally been completed and appears in the fourth sector of GoBotron with Cy-Kill and the Master Renegade masterminding the attack. Van Guard and Scratch detect it and raise the alarm but the ship unleashes a huge fleet of Thrusters. The Guardians begin launching their Command Centers and manning turrets in response. Leader-1, Turbo and Scooter are unable to reach their ship due to the Renegade artillery, with Leader-1 instead heading into the fray in jet mode. However, he is gunned down by Roguestar's weaponry. Turbo and Scooter are able to meet up with Small Foot, Matt, A.J. and Nick but a Thruster blows a hole in the ground in front of them and the three Guardians and their passengers fall through. Turbo and Small Foot are able to stop without damage while - obviously - Scooter completely fails to stop and crashes through a further wall. He is unharmed but seems to have disturbed something as a strange hand moves behind him. 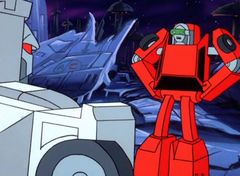 Above the battle is not going well for the Guardians; Path Finder and Wrong Way have their Command Center shot down and are hit themselves escaping, while return fire from Roguestar destroys a turret manned by Night Ranger and Defendor. Under the surface the Guardians and their human friends have awakened another heavily modified GoBeing, and Turbo suggests taking the groggy figure to headquarters. They find the base has been all but levelled; Rest-Q calls them over to one of the few remaining secure areas and puts the stranger into a repair bay. He tells them the battle is going poorly, with Staks the latest casualty. Meanwhile Leader-1 regains consciousness but is too badly injured to avoid capture by Crasher. In the medical bay at the headquarters the stranger revives and makes wise-sounding but pointless remarks about the Battle of GoBotron beginning. He tells the gathered Guardians and humans he is the real Last Engineer and that the Master Renegade stole his ship and left him trapped on the planet. They are interrupted by Cy-Kill, who broadcasts a demand for surrender and announces the capture of Leader-1, who he plans to disassemble at the Prison Moon. The Guardians are crestfallen but Sparky announces she has a plan. Scooter, Small Foot, Sparky, the Last Engineer, Matt, A.J. and Nick board a shuttle and slip by the Renegade defences. As Sparky was once assigned to a security team on the Prison Moon she knows the facility incredibly well, finding an abandoned tunnel to get them past the Renegades now swarming all over the Moon. 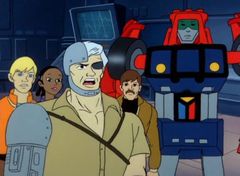 Cy-Kill and Spike watch from Roguestar as Psycho fires up the Prison Moon's Disassembler as Stinger and Stallion load Leader-1's unconscious body into the machine. Sparky leads the Guardians into the Prison Moon and Turbo takes out Spoiler but Leader-1 is already inside the machine when they arrive in the Disassembler room. Turbo blasts Stallion but Psycho activates the controls seconds before he is also shot. Small Foot takes out Stinger but Scooter is unable to reverse the controls and Leader-1 is shaken into his components and fired out into space in a pod. Block Head and Bad Boy arrive in the Disassembler room but are taken out by the Last Engineer, who has a plan. The Master Renegade meanwhile reacts with disgust at seeing his old enemy. The Guardians chase Leader-1's parts in their shuttle and Turbo is able to catch the pod before it gets out of reach, and the shuttle heads back to GoBotron. However, the Renegades have all but conquered the planet - though Cy-Kill and the Master Renegade immediately begin to clash over the control of GoBotron. The Last Engineer meanwhile guides the shuttle into a service canal under GoBotron. They travel to Dome 7, where Scooter draws Geeper-Creeper and Slicks away from their sentry positions, allowing the Last Engineer and the humans to slip inside. Turbo, Small Foot and Sparky fight the Renegades while the Last Engineer salvages parts from the Modifier. The are discovered by Loco but the Last Engineer blasts him. Outside, Greeper-Creeper is knocked out but Slicks is able to make a distress call and escape while BuggyMan joins the battle, chasing after Scooter. Sparky heads off to help him; when the Last Engineer and the humans return a Thruster has arrived overhead and they're forced to head back underground. Sparky is able to ram BuggyMan off the road but the pair are unable to head back to their friends. The Last Engineer meanwhile had been able to create a revised Modifier at his underground lab that recombines Leader-1's parts. The Guardians and their allies celebrate - Turbo even bear-hugging the unfortunate Last Engineer - but then Crasher and Fitor burst in, having discovered the lab. 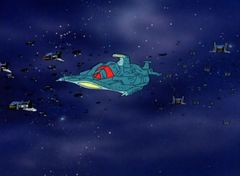 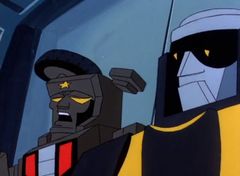 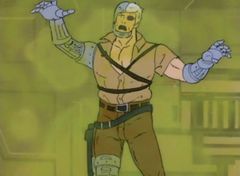 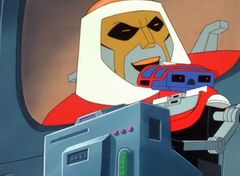 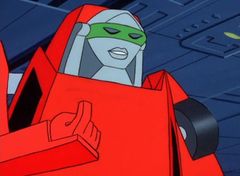