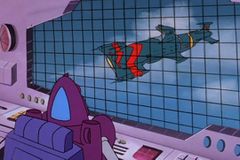 Cy-Kill, Cop-Tur and Crasher attack the human freighter Pilgrim. Their distress call is picked up on the Command Center and Leader-1 orders an interception. He and the Secret Riders Twister, Tri-Trak and Throttle set out to help. Throttle blasts Crasher while Twister and Tork pursue Cop-Tur; Cy-Kill, under fire from Leader-1, orders a retreat. However the freighter has sustained heavy damage and is losing life support; onboard the Command Center the Last Engineer orders Scooter to position the Guardian vessel above the stricken ship. Leader-1 and Throttle run a power cable across from the Command Center with Twister and Tri-Trak tearing open one of the ship's panels to allow access to a power port in the nick of time, allowing the crew of the Pilgrim to revive. The ship is escorted to nearby GoBotron, watched by the Renegades, who want to finish the job on the ship and steal its' cargo. On GoBotron Captain Hanrahan of the Pilgrim and his 2IC Kelly Jeffries explain the ship is bound for the fourth planet of the Orion 6 system, where the colony of New Earth has been established, and hope for a peaceful new start. The Last Engineer mentions he once had a similar dream, but it was dashed by one evil man currently incarcerated by the Renegades and he hopes will never escape. The subject of his barb, the Master Renegade, is indeed imprisoned on Roguestar, under the guard of Stretch. His own creations Scorp and Vamp pay a visit to mock him, and send Stretch away. Once he is gone they show they are still loyal to the Master Renegade and have sent a signal to Antares III. There, Creepy is still at the Master Renegade's lab and on receiving the signal sets off towards Roguestar in a spaceship. Meanwhile the Last Engineer decides he will join the colonists on the journey to New Earth, feeling out of place as a GoBeing among GoBots. Using plans sent by Scorp, Creepy is able to knock out Roguestar's stealth device. Fitor and Sky-Jack try to shoot the ship down but Creepy gets through and knocks out the generator powering the containment cells, while Scorp knocks out Stretch. The Master Renegade and his allies then escape. Off GoBotron the Command Center escorts Pilgrim a short distance before withdrawing, watched by Cy-Kill on the cloaked Thruster. 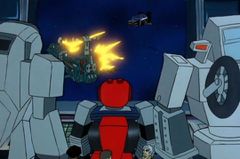 The Renegades come out of stealth mode and to attack. However, they find the ship is heavily armed and contains Leader-1, Turbo and Path Finder - anticipating an attack, the colonists and the Last Engineer are actually on the Command Center with the Secret Riders as escorts. Thruster meanwhile is strafed by Path Finder while Crasher and Cop-Tur are locked in combat before being ordered back by Cy-Kill when he realises he's been tricked. However the Command Center has already escaped into hyperspeed and is 72 hours away from New Earth. Scorp detects their signals, and the Master Renegade decides it will make a fine base for his plans. Meanwhile Cy-Kill has returned to Roguestar and hears of his enemy's escape and the treachery of Vamp and Scorp, berating Fitor for letting it happen. Cop-Tur is able to trace the Command Center and Creepy's ship, however. Jefferies hails the colony to land the Command Center but initially receives no response. They are soon given clearance to land at the planet's beautiful city, and everyone disembarks. There's no sign of any other colonists but they are met by the Master Renegade. The Last Engineer shoots at him but is taken out by return fire before Creepy throws an energy net over the trio of Guardians and Vamp mesmerises Hanrahan. 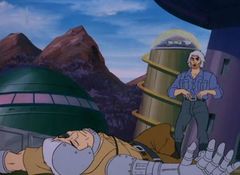 The Master Renegade tells them he has imprisoned the colonists already on New Earth but will do them no harm if they all obey him. Just then Thruster arrives with Cy-Kill onboard, bent on revenge and wanting New Earth for himself. He joins the battle along with Crasher and Cop-Tur, allowing Kelly and Hanrahan to get the Last Engineer to safety. Cy-Kill is about to swoop down on them when he is attacked by Scorp, while a stray shot frees the Guardians. Meanwhile Crasher and Vamp fight while Creepy traps Cop-Tur in another net - only to be blasted by Tri-Trak. Twister and Throttle chase after Cy-Kill and Scorp as the Last Engineer comes around. With the battle turning against them, Scorp and Vamp accept an offer from Cy-Kill for amnesty, while the Last Engineer takes a shuttle and chases after the Master Renegade, shooting him down. However, his old enemy ambushes him when he lands, injuring his robotic arm, before the pair fight - however, the Master Renegade is injured when one of his own eyebeams is deflected back at him by the Last Engineer's metal skull. Throttle takes out Crasher and Twister blasts Vamp, forcing Cy-Kill into retreat. However, a battered Creepy is able to get to his ship and lift the Master Renegade to safety before the Last Engineer can finish him off. Leader-1, Turbo and Scooter arrive long after the excitement is over, and the Last Engineer says he will protect the planet should the Renegades ever threaten it again.

"But I've got a repair team working on the stealth device!"
"Well, isn't that ducky..."

—Fitor gets on the receiving end of Cy-Kill's withering sarcasm.

"You'll see, everything will work out fine!"

-Even after good news Fitor completely misreads the room. 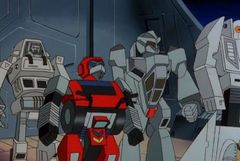 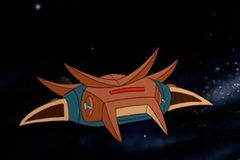 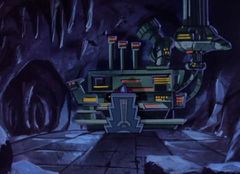 1987 - Challenge of the GoBots - Quest for New Earth (Vestron Video)