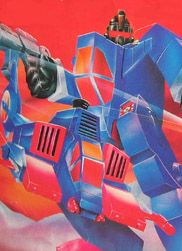 Twister is one of the Secret Riders, the Guardians' latest team of recruits. While Tri-Trak is all impulsive enthusiasm and Tork is gruff and blunt, Twister is somewhere in between and thus the leader of the team, capable of rounding up Renegades with the tornadoes his blades generate.

Twister was a member of the Guardian Council during the aftermath of the first Renegade Revolt, when the Guardians were led by the three High Protectors - Leader-1, Zeemon, and Cy-Kill. When Zeemon failed in a mission to Parthis and offered to forgo repairs to his conversion circuits as penance, Twister needled for a similar penance from Cy-Kill after his operation to mop up the Renegades remaining on Xeros was also a wash-out. Cy-Kill reacted angrily and stormed out. When Twister pushed Leader-1 for overall command of GoBotron after his success on Garleon, Cy-Kill was further infuriated and finally left the Guardians for good, defecting to the Renegades along with Fitor and Dart. "Et Tu, Cy-Kill"

Despite his prominent role during Cy-Kill's defection to the Renegades centuries ago in "Et Tu, Cy-Kill", all other stories depict Twister as only a recently active Guardian in the modern era.

Twister attended the Guardian Academy, forming part of Blue Team along with Tork, Tri-Trak and Staks. Tri-Trak's imprudent attempts to storm the academy's Thruster simulator left the cadet flat on his back, leaving Twister to wearily report his incapacitation to A.J. Foster and Nick Burns. Later when the teams were performing circuit flights around the solar system the competing Red Team of Re-Volt, Chaos and Traitor shot off ahead, tired of keeping pace with losers like the Blue Team. Tri-Trak then spotted something on one of Saturn's moons and set off to investigate, with Twister leading Tork and Staks to join him before he got in even more trouble. On the moon they were promptly ambushed by Vamp, Scorp and Creepy, with Twister and Staks trying to provide covering fire as Creepy got to grips with Tri-Trak and Tork. The Red Team soon returned and chased off the Renegades. Later the cadets received their scores, with Twister graduating with the best result of any of the class. Tri-Trak however failed to pass, and felt he had been sabotaged. That night, Twister buffed himself up with wire wool before the graduation ceremony. However, the Red Team were in fact the undercover Renegade Dread Launchers, and abducted Zeemon despite Tri-Trak's best efforts. Realising that their team-mate had been right all along Twister, Tork and Staks joined him in giving chase. After Tri-Trak smashed through the cockpit of their Thruster the rest of Blue Team gunned down the spies, rescuing Zeemon and capturing the Dread Launchers. After Tri-Trak had recovered the rest of Blue Team requested the group stay together on active service. Leader-1 happily agreed, naming them the Secret Riders as they posed for a graduation picture - with Twister making bunny ears behind Tork's head. Guardian Academy 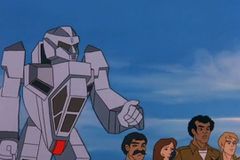 His first active assignment was serving onboard the Command Center with Leader-1, Tri-Trak and Throttle when they received a distress call from the Earth freighter Pilgrim and set off to help. On arrival he headed out on the attack, helping Tri-Trak battle Cop-Tur before the Renegades went into retreat. He then helped Tri-Trak find a power port on the Pilgrim before its life support failed. After the Pilgrim was helped back to GoBotron the Guardians came up with a scheme to get the ship past the Renegades and to the colony of New Earth, with Leader-1 taking the colony freighter out as a decoy while the Secret Riders escorted the humans and the Last Engineer on a Command Center. This section of the plan worked but when they arrived on New Earth they were ambushed by the Master Renegade and his minions Vamp, Scorp and Creepy. The three Guardians were restrained under an energy net until Cy-Kill arrived, with a stray blast from the battle freeing them. Twister then battled Cop-Tur in the air until the Renegade leader called a retreat, leaving the colony safe.Quest for New Earth Later Twister would perform security duties on the joint Guardian/UNECOM Star Fortress. Together with Mach-3 and a squad of human troops he helped defend the chamber holding the station's quantumite core from Renegade invaders, only to be overcome when Cy-Kill mesmerised the UNECOM personnel and turned them on the Guardians. He presumably recovered well enough to escape the Star Fortress before its' destruction. The Secret of Halley's Comet He was later assigned to security duties on GoBotron, and was present when Solitaire and Nuggit crash-landed on the planet. Battle of the Rock Lords 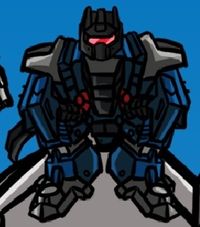 During the Diaspora, Twister was dispatched to Level 39 along with an assortment of GoBots, including the Secret Riders and Dread Launchers. Cultural Appropriation

In Axiom Nexus, Cy-Kill recalled the Secret Riders' victory over the Dread Launchers at their graduation. He remembered the Guardian members Tri-Trak, Tork, and Twister, but couldn't recall the fourth member of the Secret Riders. Staks? Throttle? Renegade Rhetoric, 2015/10/17 During Cy-Kill's ill-fated run for the presidency, Twister found Geeper-Creeper intimidating voters at Fort Bragg. Unfortunately, he was unable to prove the voter manipulation without evidence. Cy-Kill For President Twister and the Secret Riders once joined forces with the RoGuns to attack Renegade base on Mars. The RoGuns of Mars Twister and the Secret Riders were pursuing Cy-Kill when an accident caused Leader-1 to lose his memory. When the Guardian leader saw the three Secret Riders ready to capture Cy-Kill and Crasher, he stepped in to instinctively protect the outnumbered Renegades. A quick-thinking Cy-Kill twisted Leader-1 against the Secret Riders entirely, and Tri-Trak was forced to order a retreat lest they harm Leader-1. The Arithmetic of Memory Twister and the Secret Riders fought the Renegades Fangs, Crossword, and Decker Decker near a human prison until Crossword threw Twister through the side of the facility. This freed the villain Trident and led to the formation of the Guardian Smashers. The Guardian Smashers A rivalry began to develop between the Secret Riders and the up-and-coming Robo Rebels. Twister and Tork grumbled about the Rebels getting choice assignments, but Tri-Trak tried to remain level-headed and argued that all assignments were important. Unfortunately, the Riders were unable to stop the Renegades from stealing the Macrocosmic Continuum Distorter from the Scientific Moon of GoBotron and, to make matters worse, their call for aid brought none other than the Robo Rebels. Tempers flared between the two groups when the Rebels teased the Riders about their failure. Twister challenged Bent Wing to a race to track down the Renegades, and Tri-Trak was forced to go along to keep an eye on his peers.

The two pursuing Command Centers were led into a trap by their Thruster targets, surrounded by nine Thrusters that disabled the ships and brought them aboard Rogue Star. Despite their capture, the Secret Riders and Robo Rebels continued to squabble until Tri-Trak channeled Leader-1 and gave a speech about tolerance, or teamwork, or something. The united Guardians split into two mixed teams to disable the Distorter and repair one of the Command Centers using parts from both. They were successful and escaped Rogue Star having learned a valuable lesson. Riders and Rebels Twister and the Secret Riders were present on Quartex when Boulder, the Guardians, and UNECOM began the tri-planet alliance in opposition to the evils of the universe. Unfortunately, Cy-Kill was also in attendance, and his three combiners Puzzler, Monsterous, and the new Nemesis secured his victory over the forces of good. Combiner Wars, Part 1 Still, Matt Hunter managed to rally the Guardians and Rock Lords to press on against Cy-Kill. They used Cy-Kill's own arrogance to turn his allies against him, and the battle began anew. Tri-Trak and the Secret Riders were among the Guardian forces who helped vanquish Cy-Kill and Magmar, seemingly forever. Combiner Wars, Part 2

When Vec-Tor caught Sideways interfering with the Omega Locks of Old Gobotron, he imprisoned the chaos-bot with the Guardians for safe keeping. Twister was warned to keep eyes on Sideways at all times, but when Heat Seeker came to relieve him, he took optics off of Sideways for a split second. In that moment, Sideways used his trans-phase mode to become invisible, and when the hapless Guardians opened the "empty" cell, he made his escape. Echoes and Fragments

Twister was released by Tonka in the third series of GoBots, and converts from robot to a helicopter of indeterminate design. The toy was a recolour of Helicopter from Zenmai Kahen Winch Robo with a blue/grey colour scheme, and had previously been released under that name as part of Robo Machine. As one of the Secret Riders he features a friction motor and working winch in vehicle mode; the winch can still be accessed in robot mode on the figure's back. With two shoulder joints, elbows and hips Twister is one of the most articulated GoBots figures. 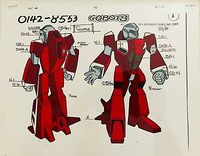 Robot Helicopter? Is that you?