Science vs. magic. Whoever wins...we lose. 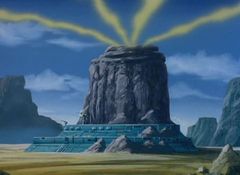 Cy-Kill, Crasher and Cop-Tur capture Scooter, Nick and A.J. and take them to their new cloaked base near the Guatal[1] cave dwellings, where Cy-Kill plans to harness the strange energies in the area, which Scooter identifies as dangerous harmonic energy. Cop-Tur is searching for the source of energy - and finds a levitating human. The man introduces himself as Tinotchka and deflects the Renegade's attacks before disappearing. Tinotchka then enters the base and warns them against disturbing the balance of energies in the area. He disables their stealth device, allowing the searching Leader-1 and Turbo to find the Renegade base, and the kids trick Cop-Tur into freeing Scooter, allowing the Guardians to escape. Crasher and Cop-Tur pull out, leaving Cy-Kill behind in the exploding base – though when the Guardians investigate the wreckage they find no trace of him. 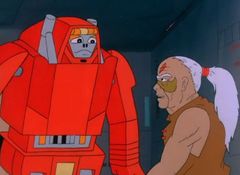 Baffled, they head for UNECOM's Deep Sea Platform to meet with Matt. Cy-Kill has survived after being transported away by Tinotchka; the shaman has him in his lair, and tells the sceptical Renegade he's an immortal being with great magical powers. Cy-Kill deduces his powers come from statuettes of his past lives and threatens to destroy Tinotchka if he doesn't help him. The magician agrees and Cy-Kill sets out for the UNECOM platform with him in tow; Tinotchka disables Leader-1 and Turbo while Cy-Kill sets fire to the platform before escaping in Thruster. Scooter is captured and confronts a visibly aged Tinotchka, who reveals he ensured Turbo and Leader-1 escaped. Away from the source of his power he is waning rapidly, partly due to the lack of magic in the world. Cy-Kill meanwhile contacts Fitor and Dr. Go on Roguestar as he prepares for an assault on GoBotron. He has Scooter and Tinotchka brought before him, and asks why the magician didn't destroy Scooter. The magician replies that he can only affect GoBots in robot mode. However when the Renegades move into orbit, the planet disappears; Tinotchka has it miniaturised in his hand and threatens to destroy it unless Cy-Kill returns him home. 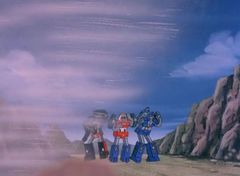 The Renegades agree but once back in his cave Tinotchka, who instantly becomes younger, destroys the token anyway. He then escapes with Scooter, who grabbed his statuette. When the Renegades try to chase them the shaman summons a sand storm, though Scooter's leg is injured. The Command Center arrives, and Turbo and Leader-1 battle the Renegades while the kids help Scooter. He notices that Tinotchka has slipped away while the Guardians drive off the Renegades, and that GoBotron's destruction was just one of the shaman's illusions. Leader-1 and Turbo are able to out-fight the Renegades in the caves, and Cy-Kill calls a retreat. Meanwhile Scooter catches up with Tinotchka. The shaman tells him that he simply changed the detectors on Thruster and reveals his time is at an end. The statuette has disintegrated and he blinks out of existence, reminding reminding Scooter there is always magic in the universe - he has but to seek it out... 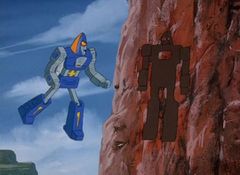 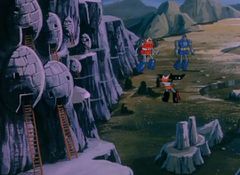