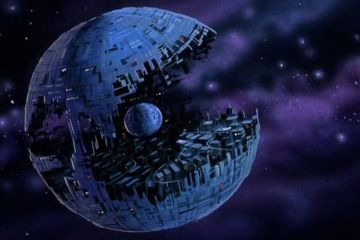 GoBotron (also spelled Gobotron) is a planet that is the home of the GoBots. The capital city is GoBotolis, which is protected by the GoBotron Fortress. 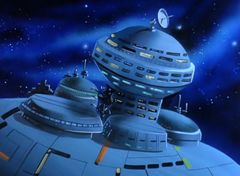 GoBotron is located in the Milky Way. Battle for GoBotron The precise age and origins of the planet are unclear but at one point the GoBeings, scientifically advanced organic bipeds, became the planet's dominant lifeforms. However their idyllic society was disrupted by the emergence of the Master Renegade, who soon drew a considerable number of followers who became known as the Renegades. They devastated GoBotron by towing an asteroid into the planet, giving it a distinctive apple-core shape. More seriously this caused drastic change to the planet's atmosphere, and the GoBeings were forced to begin upgrading parts of their bodies to survive, all while the Renegade Revolt raged on. Cy-Kill's Escape 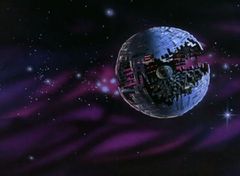 The GoBeings' self improvement reached its' apex when the Last Engineer devised the GoBot form, an entirely mechanical body containing only the organic brain of a GoBeing. The GoBots could also be placed in a Modifier, enabling them to convert their bodies into vehicles. However none of this served to end the war, and the Last Engineer decided to leave GoBotron for Antares III so he could work on the Power Warrior to defeat the Renegades. However, the Master Renegade attacked him and took his place, with the Last Engineer instead going into suspended animation on GoBotron. The Fall of GoBotron Their sudden disappearance left a power vacuum on GoBotron, during which the Evil One seized power, using his Dark Heart to plunge GoBotron into a dark age before he was defeated and went into exile. In Search of Ancient GoBonauts At some point as the planet was built and rebuilt many of the older areas fell into disuse and disrepair; the old planet at the centre of GoBotron became the run-down Old GoBotron, Lost on GoBotron while 120 of the 200 levels were sealed off entirely. The GoBots That Time Forgot 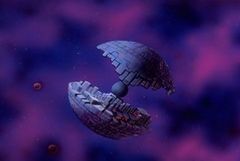 Order was eventually restored on GoBotron by the Guardians, led by their High Protectors Leader-1, Cy-Kill and Zeemon. They forced the remaining Renegades off-planet and attempted to fend off the aggressive Parthian Raiders. However, interference and criticism from the Guardian Council eventually led to a frustrated Cy-Kill defecting to the Renegades, reviving the movement. "Et Tu, Cy-Kill" 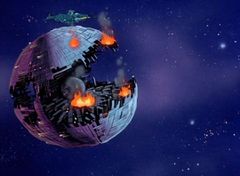 The Renegades managed to keep a foothold on GoBotron with a Fortress, where they designed and built Zod. Cy-Kill felt that a fleet of Zods would enable him to conquer the planet but realised he would never be able to build the weapons without Guardian interference. Thus he made contact with the NASA scientist Doctor Braxis, planning to conquer Earth and force its' people to build the Zods. The Renegades stole a prototype portable Astrobeam to help with the plan and Cy-Kill left for Earth, leaving Fitor to command a delaying action at the Fortress.Battle for GoBotron While the Renegades at the Fortress were captured Cy-Kill's plan nearly worked but for the efforts of the Guardians Leader-1, Turbo and Scooter, who were able to destroy the Zods on their way to GoBotron by using an unstable Sorium crystal. The Final Conflict While GoBotron allied with UNECOM on Earth peace was short-lived as Cy-Kill and his Renegades were able to escape imprisonment on GoBotron's Prison Moon. Soon after the Master Renegade re-emerged, and the combination of Cy-Kill's flagship Roguestar and the GoBeing's Transgressor technology allowed them to defeat the Guardians and take control of GoBotron. The Fall of GoBotron However, a small group of Guardians, led by Leader-1 and joined by the revived Last Engineer, were able to escape Earth. With help from UNECOM the Last Engineer was able to complete work on the Power Warrior Courageous, which was able to defeat the Renegade fleet and allow the Guardians to retake GoBotron. Return to GoBotron 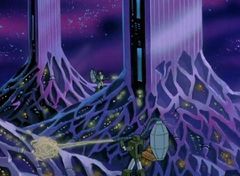 Thereafter GoBotron was frequently threatened with conquest or destruction by Cy-Kill and the Renegades. It was nearly attacked with Doctor Mobius' Inverta-ray when the bitter scientist unwisely allied with the Renegades, Genius and Son and was targeted by Alva-Nar's powerful fleet before the alien finally saw through Cy-Kill's lies. Renegade Alliance Cy-Kill also briefly installed himself as Overlord of GoBotron when he took Earth's population as hostages, but he was eventually deposed once again by the Guardians. Clutch of Doom On the other hand it became a focal point for a cross-species alliance against the Renegades, hosting crucial talks and attracting visitors to areas such as the Moon of Knowledge. The GoBot Who Cried Renegade Meanwhile when not fighting the Renegades the Guardians continue repairs and build new sections of the planet. Mission: GoBotron

In its earliest incarnation, Gobotron was but a space station autonomously run by the Go-Bots. Go-Bots #5 After the Go-Bots, led by Leader-1 conquered Earth, they expanded Gobotron into a massive artificial planet that was built around the organic world. Under Leader-1's guidance, the Go-Bots built their world into mechanical duplicate of human society with the remains of Earth becoming known as the "Heart of Gobotron". All was not perfect on this world for threat both political, such as the Trade Federation's disputes, or existential, like the monstrous Zod, threatened Go-Bot society.

Having been off-world during the uprising, Spay-C returned home with four human astronauts who eventually breached the inner sanctum and found Turbo and Scooter who had elected to remain on Earth with what remained of humanity. Go-Bots #3

After the humans had descended into Earth, the Go-Bots followed so Leader-1 could retrieve the Lazer Lance and slay Zod. Though the monster was felled, Leader-1 himself died in battle. Go-Bots #4 When his forces returned to their world, they found its surface ravaged by the Vamps who were put down by Road Ranger. Assuming leadership of the planet, Road Ranger made the decision to leave Earth behind, disconnecting Gobotron from the organic world and charting a course for deep space so his people could start anew. As their world streaked through hyperspace, Road Ranger informed Bug Bite that, not only would they begin constructing new Go-Bots, they were going to seed the multiverse with new versions of Gobotron, each with their own name. Go-Bots #5