In Search of Ancient GoBonauts

Evidence that a legendary evil GoBot visited Earth in ancient times sends the Guardians and Renegades on a race to locate his tomb and the deadly super-weapon within. 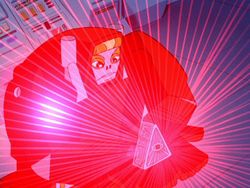 On an archaeological dig in Ecuador, UNECOM reserve officer Doctor Cunningham discovers an alien spacraft buried beneath a 6,000 year old pyramid, and a strange relic that shifts shape at his touch. With Leader-1 and Turbo away on a mission, General Newcastle calls Scooter in to examine the object, which the little Guardian is able to identify as an ancient GoBotic device. The fact that the spaceship predates known GoBotic presence on Earth by several thousand years causes Scooter to recall an old legend about a sinister GoBot known only as "The Evil One," who was exiled from GoBotron by the gods when his mighty weapon, the Dark Heart, brought "a thousand years of darkness" to the planet. Though Scooter doubts the legend could be real, the possibility that the weapon exists cannot be ignored, and he, Nick, and A.J. are assigned to accompany Cunningham back to Ecuador to investigate. 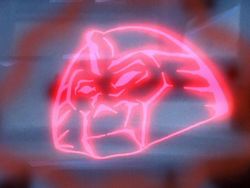 Once the group has cut their way inside the spaceship, Scooter realizes that the vessel is a drone ship used to send distress signals, rather than a manned craft. Locating the ship's message bank, he recovers a holo-cube that plays a message confirming his worst fears: the Evil One is real, and his Dark Heart lies hidden somewhere on Earth, still ready to fulfill the ancient prophecy that claims it "will wage war until none can fight." Unfortunately, that's good news to Cy-Kill, who has been tipped off to the discovery of the ship by a Renegade spy inside UNECOM, and now arrives to force Scooter into handing over the message cube by taking Nick prisoner. Rather than let Scooter give up the cube, Nick wrestles free and hits the self-destruct button on the drone ship, forcing everyone to flee back up to the surface. Cy-Kill still demands that the cube be handed over, to which Scooter responds by tossing it back down the excavation shaft. Cop-Tur nearly goes after it before coming to his senses just moments before the ship blows up. Scooter and the humans try to escape using the blast as a distraction, but Scooter winds up falling into a pit of quicksand, allowing the Renegades to catch up to them. Fortunately, Leader-1 and Turbo arrive to help their friends, but after a short battle, the Renegades manage to escape by collapsing the pyramid on top of the heroes.

After the Guardians dig themselves out of the rubble, Scooter shares a recording he made of the hologram message. Matt recognizes the shapes in the message as the Nazca Lines of Peru, which Scooter concludes must mark the resting place of the Evil One and his Dark Heart. The Guardians head for the Nazca Plain, but unfortunately the Renegades' spy informs them of this new discovery, and the villains are also soon on their way there. 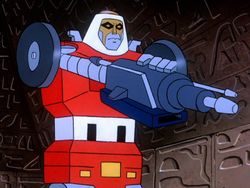 Buried beneath a rock formation on the Nazca Plain, the Guardians unearth the entrance to the Evil One's mountain-sized spaceship, inside which they discover his lifeless remains. They are welcomed by a recording of the Evil One's voice that leads them to the Dark Heart, disguised in the form of a Sphinx statue: not a mystical weapon, as the legends claim, but an antimatter device that almost destroyed GoBotron, forcing the Evil One to flee across the stars to Earth. At Cunningham's touch, the Sphinx reshapes itself into the Dark Heart weapon... whereupon Cy-Kill reveals himself to have been present all along, kept invisible by a portable stealth device! He demands Cunningham hand the Dark Heart over, and Cunningham, who turns out to have been the Renegades' UNECOM spy all along, is only happy to oblige. Crasher and Cop-Tur appear in the doorway to cover Cy-Kill's withdrawal, but the Guardians collapse the exit to prevent him from leaving. After taunting the Guardians a little while invisible, Cy-Kill decides the time has come to unleash the Dark Heart's power against them—until Leader-1 convinces him that the universe-shattering ramifications of initiating an antimatter chain reaction will ensure that Cy-Kill replaces the Evil One as the greatest monster in history. Visibly perturbed, Cy-Kill takes a moment to reconsider, and in that moment, Cunningham springs forward and activates the Dark Heart himself, gleefully deranged at the prospect of being remembered as the man who ended existence. 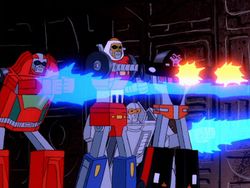 The Dark Heart's antimatter beam strikes the Evil One's body, and the chain reaction begins to spread from it throughout the entire chamber. The Guardians realize that they must stop the reaction there and then before it can spread too far, and even the Renegades are convinced to abandon attempts at retreat to join the heroes in pumping the energy of their hand-blasters into the encroaching antimatter wave. One by one, each GoBot's energy steadily depletes to the point that they have to give up and withdraw outside, until at last, only Leader-1 is left within the tomb-ship. As everyone watches, the Evil One's ship and the rock formation hiding it explode in an antimatter fireball, the reaction successfully contained by Leader-1 at the cost of his life. Or so everyone thinks until, a moment later, the weakened Guardian leader emerges from the crater, saved from death by the grace of his personal forcefield. Lacking enough energy to continue the fight, the Renegades withdraw, causing Leader-1 to muse that the Evil One's prophecy has come true after all—thanks to the energy expenditure of stopping the Dark Heart, none of them can fight. The Guardians board the Command Center and head for home, preparing to take Cunningham to prison, and to hide the Dark Heart, back in its Sphinx form, in plain sight in a museum. 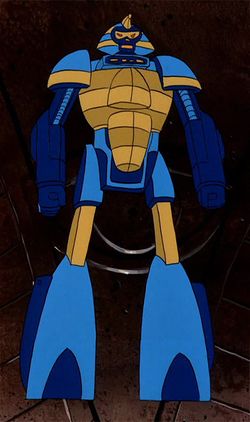 "Give me the message cube or the boy is confetti!"

"You have seen my message and understood. You have come to save me... to praise me... to worship me!"
"This guy sure has a biiig ego..."

—The Evil One's recording and Turbo

—Leader-1 and the Evil One's recording

"Cy-Kill, don't just stand there, help us!"
"I will not participate in my own destruction!"
"If you don't help us, there'll be no Earth or GoBotron—nothing but the void!"
"...you convinced me." 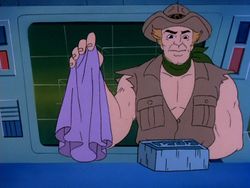 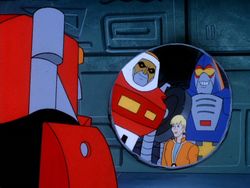 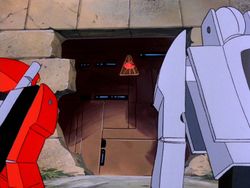 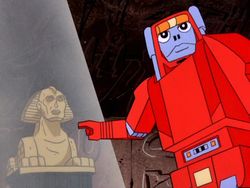