Cy-Kill wages a war against GoBotron and their very faith in the Guardians to protect them. 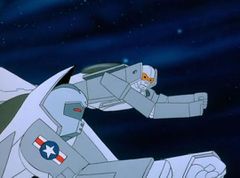 Leader-1, Mach-3, Scooter, Matt, Nick and A.J. Foster are harvesting material from barren planets for the ongoing repairs to GoBotron, towing the cargo back in the Command Center. However, Cy-Kill is watching with Crasher and Cop-Tur from Thruster, and dispatches Sky-Jack and Gunnyr to capture the materials. Leader-1 and Mach-3 engage them but Matt orders the cargo jettisoned. Mach-3 is damaged and the Harvesters are destroyed, leaving the Guardians to return to GoBotron empty-handed. Cy-Kill is delighted, aware that his plan is causing considerable discontent with GoBotron's population. He is right; Leader-1 and Zeemon show Man-O-War a section of GoBotron under construction and he complains that it should already be finished, asking if the Guardians are really able to deal with the Renegades. Zeemon defends them and Leader-1 hopes the completion of the latest forest section of the planet will impress the GoBot population. However, on a security check of the area Turbo spots Cy-Kill, Crasher and Cop-Tur at the site. The Guardians soon chase them off, but the new section is heavily damaged in as the Renegades had already planted soundwave generators underground, wrecking much of the section - and Scooter nearly falls into a ravine opened up by one of the devices. 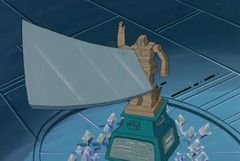 Leader-1 is able to save him and shut down the sonic generators but the damage is done, much to the Renegades' delight. At the next meeting of the Guardian Council Bolt and Man-O-War are furious at the situation, with the latter insisting the Guardians are more ruthless. Leader-1 refuses to stoop to that level but reveals he does have a plan to stop the Renegades once and for all. Turbo controls a group of Boomers to collect and process more material in the form of gigantic metal sheets, which he, Dart and Bolt prepare to tow back to GoBotron. The Renegades are watching but Cy-Kill wants to wait until they're in full view of the planet and over GoBotolis before destroying it, hoping to ruin Leader-1's prestige once and for all. Leader-1 and Ace are escorting the convoy when the latter detects a disturbance, but it seems to be a false alarm. Ace is disappointed, wishing the Renegades would try something. Meanwhile on GoBotron Zeemon, Man-O-War and Night Ranger watch the arrival of the convoy. Sky-Jack and Gunnyr attack once again, drawing Leader-1 and Ace away and allowing a trio of Thrusters to attack the convoy, injuring Dart. Cy-Kill, Crasher, Cop-Tur and Hornet set out to attack personally, being met by Mach-3 and Bolt. However, Cop-Tur is able to send the huge sheets of metal from the cargo raining down towards GoBotron before the Renegades retreat. The falling material causes huge damage and panic despite Man-O-War's attempt to blast them out of the sky as Leader-1 desperately tries to think of a way of stopping a complete disaster. 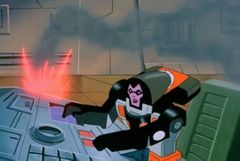 Ace manages to board Command Center 3 and remotely activate the city's defences but is unsure how long it will last. This buys Leader-1 the time to tractor beam the sheets to safety, ending the destruction and saving most of the material. Man-O-War is impressed, believing the display will boost GoBot confidence in the Guardians. However, Gunnyr reports this to Cy-Kill, who orders a full-frontal assault on the Guardians, blasting the Renegade when he queries this course of action. The Renegade fleet descends on GoBotron, where the Guardians are waiting - Leader-1, Ace, Bolt and Mach-3 attack in aircraft mode. Battle is joined; Ace and Bolt are shot down but once the Renegades are committed a fleet of Command Centers appears and begins to cause heavy damage. A frustrated Cy-Kill leaves his ship to attack the Guardians personally, blasting Mach-3, but is then shot in the back by Leader-1. Crasher and Cop-Tur collect him and retreat, leaving Zeemon to congratulate Leader-1 at the next Council meeting. Man-O-War apologies for having doubts, and Leader-1 states the victory shows what free GoBots working together can accomplish as the repairs to GoBotron are back on schedule. However, back on the safety of Roguestar, Cy-Kill swears he will return.

"Nothing's more fun than making Leader-1 look like a jerk!"

—Cop-Tur is a Renegade who loves his job. 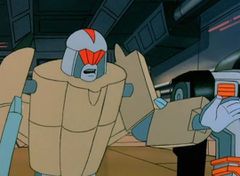 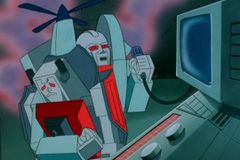 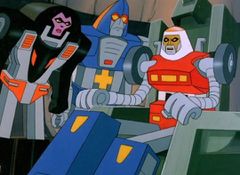