A team of cryogenically-frozen astronauts and their Go-Bot partner find themselves drawn into political turmoil on a veritable planet of the Go-Bots. 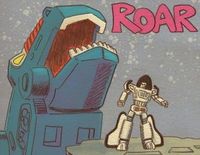 Spay-C's deep-space mission hits an unexpected wrinkle when the space shuttle and his crew arrive over a massive, metallic world, prompting him to revive his cryogenically frozen human partners to assess the situation. As one of them points out, it's not what they came to explore, but, as Spay-C prepares to touch down on the planet's surface they cannot ignore the chance to explore an inhabited planet with its own civilization. The crew disembark and set out aboard a rover and pick up some nearby life signs... but they are surprised to learn that those life signs belong to gigantic, insectoid Go-Bots, who immediately menace the explorers. Only the timely intervention of Spay-C prevents the crew from a gruesome end and the intrepid Go-Bot rescues his human compatriots from falling off the "edge of the world", for this metallic planet is but a partially completed shell, built around the sealed-off remains of a smaller world. Before any of the group can ponder the meaning of this strange sight, they are attacked by more of the monstrous Go-Bots and the astronauts take shelter inside Spay-C. This ambush is brief; a terrifying roar sends the insectoid 'bots scurrying for cover—the monstrous Zod clambers up from the lip of the chasm! Spay-C does his best to outmanoeuvre the fire-breathing monster, but is soon seized in the monster's jaws. It looks like the end for the explorer and his crew before a fusillade of fire from another group of humanoid Go-Bots sends Zod tumbling back over the metal cliff. Their rescuers are none other than Leader-1 and his royal retinue, their leader explaining to Spay-C that they have been hunting Zod for years.

Leader-1 summons their Command Center, instructing the domesticated robot to transform into its base mode - but rather than welcome the new Go-Bot into the fold, he orders his Guardians to throw the interloper into the brig. Leader-1 and his followers are unaware of the humans inside Spay-C's cockpit however, and Spay-C is able to slip the astronauts into the ventilation system to make their escape. As they slip through the inner workings of the huge mechanical creature, the astronauts pass by Leader-1, holding court in his throne room as he confers with delegates from the Trade Federation. The Federation delegates are critical, however: Leader-1 has become a tyrant, crushing dissent across the planet, and yet his power is eroding, as he has been unable to quash Zod's constant attacks on the highways of Gobotron. One of them warns that if Leader-1 doesn't defeat Zod then someone else surely will — like the lone vigilante Road Ranger, descended from nobility — will be free to claim the crown. The astronauts have seen enough, and they head back to the brig to free their Go-Bot compatriot. Before they can free him, however, he's taken by Blaster to the interrogation room, where Leader-1 himself presides over what follows. Believing that Spay-C is a spy sent by his enemies, he demands to know where the shuttle-bot came from but when Spay-C says he's from Earth, Leader-1 punches him for speaking the "forbidden word", and sentences him to a full reprogramming in the morning. 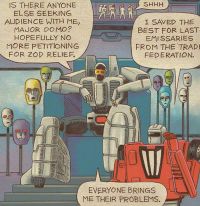 That night Leader-1 has a vision of his own, sparked by his encounter with Spay-C, where he is visited by Eno, the dark angel. Though Eno mocks his recent tyranny, Eno shows him the way to the "Heart of Gobotron", the rocky world at the center of the planet where lies the only weapon capable of defeating Zod: the Lazer Lance. Spay-C mopes over his impending fate, and his own self-loathing for keeping the truth from his astronaut friends. When those astronauts arrive and successfully break him out of the brig, Spay-C is about to tell them what he knows but is interrupted when his jailers arrive. Spay-C overpowers Heat Seeker but his melee with Blaster is interrupted when Leader-1 arrives and tells him that he needs Spay-C as his words have inspired a visitation from Eno, and a clue to defeat Zod. Elsewhere on the planet Zod has fallen under the sway of Cy-Kill, and now eagerly devours the innocent Go-Bots Cy-Kill throws to him. Leader-1 and his followers head out aboard a Command Center and while Spay-C ingratiates himself with the Go-Bot leader's followers, his crew discuss their strange situation, worried that the Go-Bot might have fallen under the sway of Leader-1. They wonder whether the Go-Bots have learned English by intercepting Earth television broadcasts and have other questions about their unwitting hosts. That night a pensive Leader-1 surveys the ramparts and spies an army: Cy-Kill and the Renegades, including Zod. Alarms are raised as the Guardians gear up for war, shutting the Command Center and slicing Twin Spin in half in the process. The Renegades are forced to scatter for cover as the ship blasts off but Leader-1 isn't the only Go-Bot with a spaceship, as the Renegades load Zod aboard Thruster and give chase. 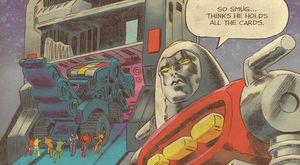 The pursuit turns in favor of the Renegades as the Thruster grabs the smaller Command Center in its mighty arms; inside the Guardian ship, Spay-C's crew have had enough, and eject from the Go-Bot in his lunar lander. They're intent on heading back to Earth, with or without their Go-Bot - prompting Spay-C to come clean: the humans can't go back to Earth or at least not the Earth they know, because they've been in cryogenic stasis for countless years. The conversation is cut short as Guardian navigator Tic Toc announces his plan to break free by jumping into hyperspace but he needs time to do it. Leader-1 and the other airborne Guardians take to the sky to keep the Renegades tied up long enough. Though Spay-C takes a bad hit, the gambit works, and while Cy-Kill is left confused — wondering if the Guardians have jumped into deep space — the Command Center and all its occupants rematerialize on the far side of the planet, preparing to breach the final layer of metal that separates the planet from the mythical "Heart of Gobotron", sealed off for eons. 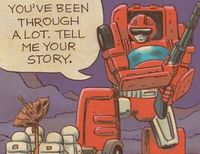 As the Command Center touches down on the lifeless, rocky surface of the planet Spay-C and his occupants dash off but are taken by surprise when the soft ground gives way beneath them, sending them into an even deeper level of the planet. They're they encounter a pair of ancient Gobotic survivors: Turbo and a babbling, childlike Scooter. As Turbo explains, they've been on the run from Leader-1 and his forces — responsible for reducing Scooter to this state — and when Turbo detects a complement of humans inside Spay-C, he orders the shuttle to let them out. As the astronauts explain their complicated predicament, and worry if they can even trust their Go-Bot, Turbo realizes that Spay-C hasn't told them the whole truth, and as the two brawl the humans drive away in their buggy. Passing strange, rock-like creatures, the group stops at a safe distance to analyze the soil and air of this alien world. Picking up a handful of dirt in his fingers, one of the astronauts finally realizes the full, terrible truth of what has happened - for Gobotron is, and always has been Earth.

Characters in italic text appear only in flashbacks.
(Numbers indicate order of appearance.)

"They're robots with no culture of their own so they jacked ours."

—An astronaut offers his theory on Gobotron's development.