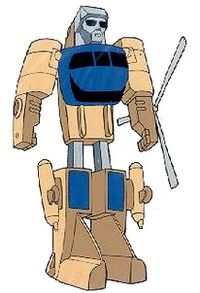 Twin Spin is a Renegade. He's a bit of a bully even by their standards, always being ready to use his powerful arm-mounted rotor blades to menace his targets.

Along with Spoiler, Twin Spin was tasked with watching Guardian prisoners onboard a damaged Command Centre after the fall of GoBotron. He went above and beyond in the jerk stakes by preventing Rest-Q from tending to the wounded and later threatening an injured Turbo. They were unaware that Sparky and Scooter were watching form outside however, and the two Guardians hacked into the Command Center's systems. Spoiler immediately thought the engines of the ship were overheating; Twin Spin took a little more convincing but Scooter was able to simulate external footage of the Command Center being on the point of destruction. The Renegades bugged out, leaving the prisoners to what they believed would be their doom.Flight to Earth 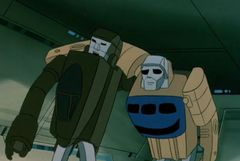 He was based on the Renegades' asteroid base when Zero, Crasher and Cop-Tur returned from an unsuccessful raid on a weapons factory on GoBotron. Zero called Cy-Kill out on his poor leadership record and stormed out; Twin Spin and Geeper-Creeper decided to follow Zero instead, and the trio make a successful raid on GoBotron's main power station. Zero then challenged Cy-Kill for leadership of the Renegades, winning the battle and prompting Stretch and later Bad Boy to join them. With Crasher their prisoner, Zero decided to collect a Guardian in order to tie both the rival factions up, successfully taking Turbo. Sadly the plan was stymied after Stretch managed to release both captives just as Zero was planning a full assault on GoBotron. The group were forced to withdraw to Zero's hideout but they were soon under attack from the Guardians; Twin Spin quit, along with Zero's other troops. Hoping to take out both groups, Zero set the base to self-destruct; Twin Spin tipped off Cy-Kill and in return he, Stretch, Geeper-Creeper and Bad Boy were accepted back into the Renegades.The Third Column 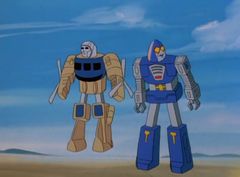 Twin Spin was later part of a Renegade taskforce who attacked a UNECOM base; however, as the psychic Mira Shaw had been able to foresee the attack the Guardians drew a forcefield around the base and easily drove them off. As a result Cy-Kill decided to abduct Mira instead, using an abandoned fairground as cover. When the Guardians attempted to stop them most of the Renegades tried to escape via Loco, though Twin Spin was sent on ahead to get Thruster ready, and thus avoided the defeat that inevitably came with Cy-Kill's decision to escape on a train rather than simply fly off carrying a single human.Renegade Carnival When Roguestar was in orbit above Cordax Twin Spin and Stallion patrolled its' corridors, but completely missed that A.J. Foster and Nick Burns had escaped, meaning they were able to free Small Foot and thwart Cy-Kill's plans on the planet below. Battle of the Rock Lords 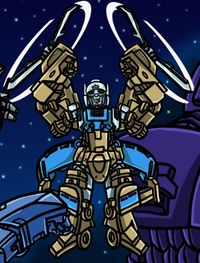 During the Diaspora, Twin Spin was apparently dispatched to Level 69 along with an assortment of Guardians and Renegades. Cultural Appropriation

The roster for Level 69 actually mentions "Tailspin", but no such GoBot exists, so presumably this was a misspelling of "Twin Spin".

When the Renegades discovered a mystical gemstone was in the possession of a wealthy theatre enthusiast, they performed a showing of "The Pirates of Penzance" for his pleasure. Twin Spin had a serviceable role as the Police Sergeant. The Show Must Go On Cy-Kill created an alternate universe by removing Luther Unum from the past before he could become Leader-1 of the Guardians. Twin Spin was one of the Renegades in this reality who was charged with guarding the Time Portal used in Cy-Kill's scheme, but a resistance force of humans and Guardians managed to get past him and set the timeline right. Renegade Victory Part 2 Twin Spin, Blades, and Pincher attacked a UNECOM facility on Mars, but were driven off by Doctor Braxis and his new invention, the Destabilizer Cannon. Once Braxis Twice Shy Part 1 While marooned on Axiom Nexus, Cy-Kill recalled for his audience Twin Spin's role in Zero's mutiny. Renegade Rhetoric 2015/10/15 He also cited Twin Spin as a good example of GoBot diversity when it came to alternate modes, especially compared to Transformers. Renegade Rhetoric 2015/10/14

For their own amusement, Sideways and Gong played with reality so that elements of a Gargent stream blended in and out of a Primax stream. In this amalgamated universe, Twin Spin was a Renegade who attacked a Command Center on its way to Autobot City on Earth. He dodged an acid pellet launched by Prowl and fired back, eliminating the Autobot soldier. Echoes and Fragments 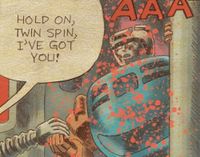 Far in the future, when the Go-Bots had taken over Earth and built GoBotron around it, Twin Spin was one of Cy-Kill's Renegades. He was among the vanguard when they made an assault on the stationary Command Center. However, as he reached the Guardian base Leader-1 ordered it converted to its' spaceship mode, causing the walls to close in. Cy-Kill tried to pull Twin Spin to safety but the closing Command Center sliced him neatly in half, leaving Cy-Kill holding the top half of his body. Issue 4 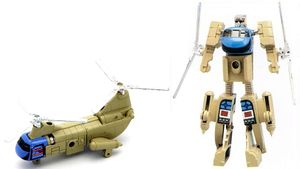 Twin Spin was released by Tonka in the second series of GoBots, and converts from robot to Kawasaki Vertol KV-107-II5 (a licensed version of the Boeing CH-46 Sea Knight) tandem rotor helicopter in 6 steps. The toy was a recolour of Vertol Robo from Machine Robo, with a new tan and blue colour scheme. Twin Spin's rotors can be mounted on the outside of his wrists in robot mode. While he has ball-jointed shoulders that give considerable articulation both they and the figure's ankles can work loose over time.

Twin Spin was released in a gift pack with Cy-Kill and Stinger. All three toys are unchanged from their original releases.

The sixth toy from the fourth wave of figures, Twin Spin was released by Bandai Australia in 1984. While initially a repackage of the green Battle Copter Man on a new black backing card depicting a blue-tinted alien landscape, a running change in 1985 saw the figure replaced with its tan and blue variant.