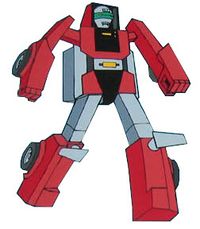 Spoiler is a Renegade known for his boundless enthusiasm. Cy-Kill often partners him with Slicks for a fast and furious double team.

Spoiler was part of the team of Renegades - along with Psycho, Stinger, Stallion, Bad Boy and Block Head - sent to GoBotron's Prison Moon to oversee to the disassembling of the captured Leader-1. He was left on guard duty but Sparky's knowledge of a secret tunnel into the cells allowed Turbo to sneak up and blast Spoiler before he could raise the alarm.The Fall of GoBotron He was later assigned to watch Guardian prisoners onboard a damaged Command Center after the fall of GoBotron, along with Twin Spin, and they took delivery of a battered Turbo from Cop-Tur and Tank. They were unaware that Sparky and Scooter were watching form outside however, and the two Guardians hacked into the Command Center's systems. Spoiler immediately thought the engines of the ship were overheating; Twin Spin took a little more convincing but Scooter was able to simulate external footage of the Command Center being on the point of destruction. The Renegades bugged out, leaving the prisoners to what they believed would be their doom.Flight to Earth 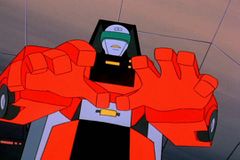 Spoiler travelled to Earth via Astrobeam to help Crasher destroy Turbo at the Barstow Grand Prix but the beam reversed before he could complete the job.Speed Is of the Essence Along with Crasher, Cop-Tur, Slicks and Stinger he was one of the Renegades who converged on the house of young scientist Buddy, capturing her for interrogation after the Renegades detected her Spectrograph. While Cy-Kill took the girl off to Roguestar for Brainstorming Spoiler returned to the Renegades' base inside Big Horn Mountain along with Slicks, BuggyMan and Fly Trap. They were followed by Scooter and Nick Burns, who stowed away on their Thruster. Spoiler found them moments after launch but Scooter dropped a door on him. While he was pinned Nick then jumped on his back and tore handfuls of wiring out of Spoiler, deactivating him.Whiz Kid

Spoiler was one of the Enemy Machine Men from Robotron who joined Cy-Kill in targeting the peaceful planet Earth for conquest. Along with his comrades, Spoiler soon forced the Friendly Machine Men into a retreat while causing huge destruction. However, they regrouped and counter-attacked; whether he, Crain Brain and Screw Head would be able to fend off the counter-offensive was a matter for debate.Space Wars 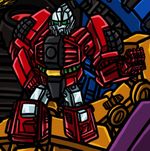 During the Diaspora, Spoiler was dispatched to Level 44 along with a few of his fellow Renegades and the RoGuns. Cultural Appropriation

Spoiler and Bug Bite were appointed saboteurs by Cy-Kill to prevent the Guardians and Rock Lords from establishing a firm alliance. They orchestrated a series of "accidents" and explosions that pointed towards Rock Roller, a Lord unfamiliar to the Guardians. Unfortunately for the Renegades, their ruse was ultimately uncovered. On the Rocks Spoiler joined Crasher and Stallion in the Alienapolis Five Million, with control of an entire advanced species on the line. The Renegades cheated to win, but Turbo nonetheless pulled out a victory at the end. The Alienapolis Five Million When a raid on a Guardian communications hub went bad, Cy-Kill was particularly harsh to his troops. So, when the Master Renegade appeared offering Power Suit upgrades to the Renegades if only they made him leader, Spoiler, Fly Trap, Loco, and Screw Head eagerly turned on Cy-Kill. Spoiler's reverse-engineered P3 suit gave him blinding speed. Eager to test their might, the Power Suited soldiers and the Master Renegade launched a direct assault on the Gobotron Fortress. When the time came to form a dark copy to battle Courageous directly, however, the "united" Renegades couldn't agree on who should control the combiner. The hobbled "Grungy" was easily beaten apart by Courageous, and the Renegades meekly limped back to Cy-Kill, begging for his good graces. Spoiler secured Cy-Kill's mercy by providing a scan of the Master Renegade's ship, giving the Renegades the chance to recreate their own Power Warrior. Coup de Grunge

As Sideways and Gong played with mixing universal streams, the Renegades staged an all-out assault on Autobot City on Earth. Spoiler was one of the Renegades fighting to breach the Autobot defenses. Echoes and Fragments

Spoiler was one of the Renegade Go-Bots that flocked to Cy-Kill in the desert near Route 66, helping surround and subdue the US government Go-Bot Leader-1 and retrieve military secrets from his brain. Issue 1 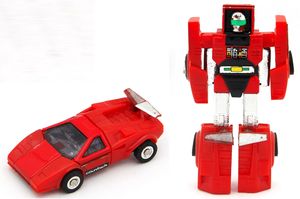 Spoiler was released by Tonka in the first series of GoBots, and converts from robot to Lamborghini Countach LPS500 in 4 steps. The toy was a repackaging of Countach Robo from Machine Robo, with no significant changes beyond the omission of the extra sticker sheet of the Japanese release. Weak points on the figure are the sliding arms, which can become loose, and the chrome on the rear wing, which is so thin as to be almost two-dimensional. The figure has articulation at the shoulders and the knees, though the latter only lock into place straight.

Belatedly added to the European line - possibly because of overstock from Countach Robo's concurrent reissue in Japan - Spoiler featured no changes from the American release.