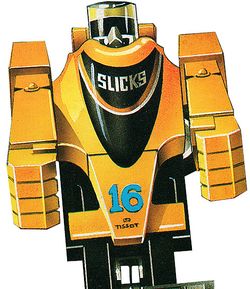 Slicks is a Renegade, one of the several fast and not too bright troops Cy-Kill uses for miscellaneous henchman duties.

During Cy-Kill's joint invasion of GoBotron with the master Renegade, Slicks was assigned to guard the planet's modifiers along with Geeper-Creeper, a task that bored them both. They got a bit of excitement when Scooter used one of his holograms to lure them into a dead end, and the pair came under fire from Turbo, Small Foot and Sparky. Slicks was able to escape the trap and call in back-up from a Thruster, though it arrived too late to prevent the Guardians and their allies from escaping with the parts they needed. The Fall of GoBotron 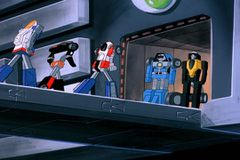 Along with Spoiler, Slicks was later Astrobeamed to Earth as part of Cy-Kill's plan to either capture or destroy Turbo, who was dormant in his car mode and competing in the Barstow Grand Prix, driven by the unwitting humans Greg and Don. Along with Crasher and Spoiler, Slicks smashed his way through many of the other humans in the field but was unable to close on Turbo, who was beginning to recover and used all sorts of tricks to keep the humans close until the Astrobeam reversed unexpectedly. Slicks and Spoiler were thus returned to Roguestar Speed Is of the Essence Slicks was one of the Renegades who converged on the house of young scientist Buddy, along with Crasher, Cop-Tur, Spoiler and Stinger he was , capturing her for interrogation after the Renegades detected her Spectrometer. While Cy-Kill took the girl off to Roguestar for Brainstorming, Slicks returned to the Renegades' base inside Big Horn Mountain along with Spoiler, BuggyMan and Fly Trap. They were followed by Scooter and Nick Burns, who stowed away on their Thruster and released Buddy. Slicks and BuggyMan chased them around Roguestar but were thrown off when Scooter disguised the trio as a pile of boxes thanks to his hologram projector, allowing them to get to a shuttle and escape. Whiz Kid

Slicks was part of the huge Renegade army gathered by Cy-Kill at Mauna Mauna. However, the Guardians were ultimately able to counter them and the Renegades retreated. The Battle at the End of the Earth 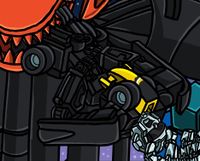 During the Diaspora, Slicks was dispatched to Level 51 along with an assortment of Guardians and Renegades. Cultural Appropriation

When Cy-Kill ran for President of the United States, Slicks took to the racing circuit of Indianapolis to drum up support. Cy-Kill For President In an alternate timeline, Renegades ruled Gobotron after Cy-Kill removed Leader-1 from history before he could assume command of the Guardians. A group of rebels stowed away on a Thruster from Earth to GoBotron. Slicks nearly discovered them, but the Guardian slave Guide Star made a commotion that distracted him. Renegade Victory Part 1 Slicks was one of the Renegades summoned to the Arena of Strife by Guerr-O-Vac. He successfully battled Van Guard in the Arena, defeating his Guardian opponent and bringing the Renegades closer to victory. GoBot Arena The Renegades attempted to steal an electronic growth serum from Cambridge University to further Cy-Kill's plans. Slicks and Klaws were summoned via Astro-Beam when Scooter tried to escape with the serum, but the little Guardian accidentally spilled in on himself. Attack of the 50 Foot Guardian

For their own amusement, Sideways and Gong played with reality so that elements of a Gargent stream blended in and out of a Primax stream. After the first reality-shift, Slicks and the Renegades assaulted a Command Center on its way to Autobot City on Earth. When the crew was disabled Slicks, Cop-Tur, Crasher, and Psycho assumed the controls. Several shifts later, Slicks was among the injured Renegades and Decepticons fleeing the Battle of Autobot City aboard Astrotrain with their weakened leader, Megatron. On their way back to Cybertron, Zero used a thin pretext to toss Megatron, Slicks, and the other injured soldiers out into space. They were found by Unicron, who recruited Megatron to be his servant in exchange for reformatting the villain and his troops into new bodies. Crasher became the warrior known as Fracture, while Slicks became her similar-bodied "armada" of one. Echoes and Fragments

Slicks was among the Renegades who took Cy-Kill's side against Leader-1 during the Go-Bot uprising. Issue 2 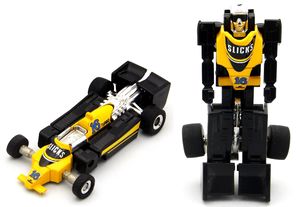 Slicks was released by Tonka in the second series of GoBots, and converts from robot to Renault RE20 Formula 1 race car in 8 steps. The toy was a recolour of F-1 Robo from Machine Robo, with a new colour scheme - one of the first GoBots figures to feature a new colour scheme. For the American release all of the yellow plastic on the original figure was replaced with black, with only the painted diecast chest remaining the original yellow. A new set of factory stickers were created to blend with this new look, though the racing numbers on the roll bar and front were kept. A weak point of the mould is the front suspension, which can become loose in its' mountings and cause loose front wheels.

Slicks was planned to be included in a Gift Pack along with Cy-Kill and Water Walk which was advertised in the 1985 Tonka catalogue but was ultimately not released. 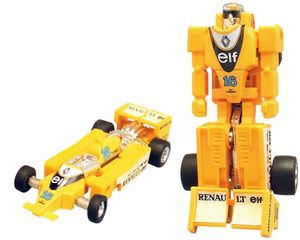 The original European release of Slicks followed the Japanese release by retaining the yellow plastic and realistic Renault stickers (including the additional sheet included with the Machine Robo version), though some of the yellow/black version (possibly unsold North American overstock) were sold on the same cards in the later years of the line. These also included the Japanese/European stickers, leading to a hybrid appearance.

The second toy from the fourth wave of figures, Renault Man was released by Bandai Australia in 1984. He remained identical to the original yellow F-1 Robo toy, albeit packaged on a blue backing card. Later in 1984, the figure was re-released with his GoBots name and faction on a new black backing card depicting a blue-tinted alien landscape. A running change in 1985 saw the figure replaced with its black variant.