Grungy is the Power Warrior in service of the Renegades. Created to serve as the opposite number to Courageous, Grungy is forged by Renegade-augmenting Power Suits and their central Spaceship. Beware the march of Grungy!

Knowing of the Last Engineer's ship and the Power Suits he bequeathed to the Guardians, the Master Renegade contacted Roguestar with an offer: in exchange for being named their leader, he would build the Renegades a Power Warrior of their own. Cy-Kill naturally rejected the idea of giving up his power, but Cy-Kill had mistreated his soldiers recently, and four of them turned on Cy-Kill and Cop-Tur to accept the Master Renegade's proposal.

Back on Roguestar, the Master Renegade found Cy-Kill free, and fled with his command ship. Spoiler pleaded for leniency, telling Cy-Kill he had made a scan of the command ship, so the Renegade's could one day recreate their own Power Warrior. Coup de Grunge 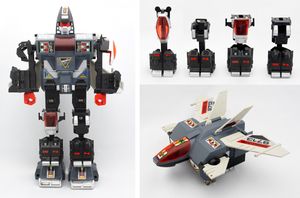