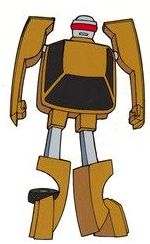 Stinger is a Renegade, and one of Cy-Kill's faster warriors. More brutish than refined despite his speed, Stinger has the raw power necessary to get the job done. Cy-Kill often pairs him with Stallion, and their good-natured rivalry pushes both Renegades to accomplish even more for the cause.

Stinger was one of a team of Renegades - along with Psycho, Stallion, Bad Boy, Block Head and Spoiler - sent to GoBotron's Prison Moon to oversee to the disassembling of the captured Leader-1. Along with Stallion, Stinger loaded the injured Guardian into the machine shortly before a Guardian rescue squad appeared. While Stallion was knocked out by Turbo, Psycho was still able to activate the machine and disassemble Leader-1 before he himself was knocked out. Stinger fell soon afterwards, blasted by Small Foot.The Fall of GoBotron 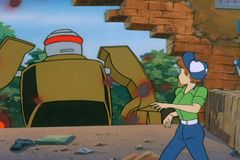 Stinger was stationed on Earth when Cop-Tur was taken over by Buddy's spectrometer; Cy-Kill immediately ordered all of the Renegades to converge on the girl's house. She was able to destroy her machine but Stinger smashed open the wall of her room, grabbing the girl and the remains of the spectrometer. He handed them over to Cy-Kill, who soon realised Buddy's brain had exactly the information he was looking for and took the girl back to Roguestar for Brainstorming. Whiz Kid He again worked with Stallion and Bad Boy as part of Fitor's team of the most loyal Renegades during a raid on an advanced UNECOM surveillance facility but got ran over by Turbo for his trouble when the Guardians arrived. While he, Stallion and Bad Boy were able to get back to Roguestar by Astrobeam, Fitor wasn't - being restrained by Leader-1's forcefield - to Cy-Kill's fury, as the bungled raid saw his most trusted lieutenant captured.Fitor to the Finish

During the Diaspora, Stinger was dispatched to Level 69 along with an assortment of Jewel Lords. Cultural Appropriation 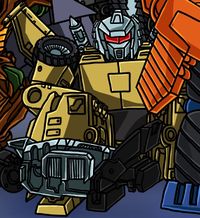 When Cy-Kill schemed to become President of the United States, Stinger and Stallion campaigned with the auto workers of Detroit to ensure his victory. Cy-Kill For President After using a modified Astro-Beam to displace the entire Communication Moon of Gobotron, Cy-Kill thought he would have 48 hours to plunder the moon's secrets. Leader-1 was displaced with the moon, however, and slowly disposed of Cy-Kill's Renegade squad. Stinger was electrocuted in the power core of the moon. The Stolen Moon

Stinger and Stallion raided a museum to steal a meteorite fragment for Cy-Kill's new weapon, the reciprocating positronic jammer. Unfortunately, the Robo Rebels interrupted them and the clumsy Renegades stumbled through the artifacts while making their escape. Stinger ripped a Japanese tapestry and got part of it caught in his door as they sped away. Back at Thruster, Cy-Kill discovered a hidden scroll inside the tapestry promising great power. He used it to locate the Ashi Dojo on Mount Hotaka in Japan, and forced the ninja master to teach Stinger, Stallion, and four other Renegades the secrets of ninjitsu. They stymied the Guardians with their new skills until the master taught Leader-1 his secrets too. The status quo was restored when the reciprocating positronic jammer wiped the new memories of all the GoBot ninjas. Cy-Kill's Ninjas Cy-Kill considered Stinger and Stallion good candidates to eliminate the new Guardian cadet, Beamer. Opportunity Knocks Part 2 Stinger surprisingly got along well with South Claw, one of Cy-Kill's new recruits from Axiom Nexus. Not all his new soldiers adapted easily to the Renegades, however, and Cy-Kill had Stinger keep an eye on Rube when he briefly went rogue. One Born Every Minute

As Sideways and Gong played with mixing universal streams, the Renegades staged an all-out assault on Autobot City on Earth. Stinger was spotted blasting Hot Rod and Kup from the air as they tried to return to the city. Echoes and Fragments

Stinger was one of the Renegade Go-Bots that joined Cy-Kill's army in the uprising against humanity.Issue 2 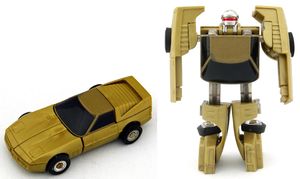 Stinger was released by Tonka in the second series of GoBots, and converts from robot to Chevrolet Corvette sports car in 7 steps. To meet demand Tonka commissioned Bandai to produce several additional moulds specifically for use in the GoBots toyline overseas, including Stinger. The toy is stamped "MRT-44" (Machine Robo Tonka) for reference. Like several of the 'MRT' moulds Stinger has a surprising amount of articulation for a toy of the period of such a small size due to the use of ball-joints in the shoulders, and is less prone to wear than many of its' peers.

Stinger was released in a gift pack with Twin Spin and Cy-Kill. All three toys are unchanged from their original releases.

Stinger was also released in a gift pack with Zero and Screw Head. All three toys are unchanged from their original releases.

Along with Sparky, Stinger was one of only two of the 'MRT' moulds to be released outside North America, being issued in Europe with no changes from the original release.