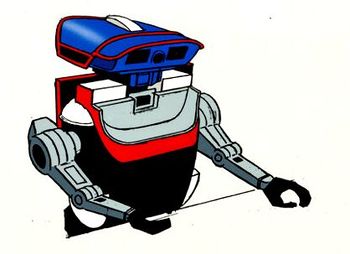 With a name like Psycho, one figures he had to join the Renegades. He certainly earns his name with a crazy and unpredictable personality that only Cy-Kill can control, with a habit of lapsing into sickening laughter while carrying out some fiendish task or another. Psycho is feared by the rest of the Renegades, let alone the Guardians. 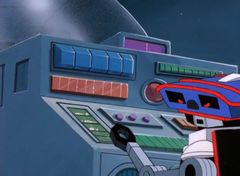 Psycho was one of the Renegades stationed at the Renegade Fortress on GoBotron when it came under concerted Guardian attack. Along with Fitor he launched Zod towards Earth for the next phase of Cy-Kill's fiendish plan.Target Earth

He was later part of the team of Renegades - along with Stallion, Stinger, Bad Boy, Block Head and Spoiler - sent to GoBotron's Prison Moon to see to the disassembling of the captured Leader-1. Psycho was charged with actually operating the machine itself, something he took considerable glee in. Even though the chamber was stormed by a Guardian rescue squad, led by Sparky, Turbo and Small Foot, he was still able to activate the controls to disassemble the Guardian commander seconds before Psycho was shot by Turbo. The Fall of GoBotron 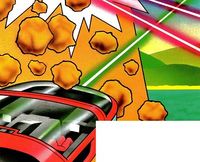 When Matt Hunter, A.J. Foster and Nick Burns were transported to GoBotron by Cy-Kill they were soon met by the giant GoBots Baron Von Joy and his assistant Psycho[1] As part of their scheme Psycho transported the humans, gloating about the Renegades' plans to wipe out the Guardians and use the humans' bodies to convince the council it was the humans who killed them. As he waited to shoot down the ship before gassing the trio Turbo appeared - having sneaked to GoBotron onboard Thruster - and shot him through the head, rescuing the humans. By Astrobeam to GoBotron Later he was called down to Earth by Cy-Kill as part of the Renegade army massing at Mauna Mauna. However, the Guardians met them in battle and Dive-Dive scored a hit on a stone idol which collapsed on Psycho and Bad Boy. The Battle at the End of the Earth 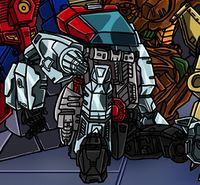 During the Diaspora, Psycho was dispatched to Level 11 along with an assortment of Guardians and Renegades. Cultural Appropriation

According to Cy-Kill, Psycho is incredibly fast as a GoBeing Psychoroid car, although his technical skills tend to get him assigned to duties other than field work. Renegade Rhetoric 2016/10/15 When the Renegades put on a performance of "The Pirates of Penzance" to get a mystical gemstone from a wealthy theatre fan, Psycho did remarkably well in the role of Ruth once Crasher passed it up. The Show Must Go On Psycho and Blades attempted to thwart the alliance of Zero and the Master Renegade, but the Guardians intervened at a confrontation in a UNECOM warehouse. The Renegades were forced to flee without disposing of the traitors. Trash and Treachery Psycho was one of the Renegades who attacked UNECOM in order to steal a supply of the new element, Scootonium. The Scootonium Scenario

For their own amusement, Sideways and Gong played with reality so that elements of a Gargent stream blended in and out of a Primax stream. After reality shifted, the Renegades assaulted a Command Center on its way to Autobot City on Earth. When the crew was disabled Slicks, Cop-Tur, Crasher, and Psycho assumed the controls. Echoes and Fragments

Psycho joined Cy-Kill's Renegades in the Go-Bot uprising on Earth, watching Crasher torment Scooter. Crasher threatened to give him to Psycho if he didn't lick every speck of dirt from her tyres. Issue 2 He stayed in Cy-Kill's service and his vehicle mode saw him join Cop-Tur, Fitor and Pincher in attacking the Command Center before it jumped to hyperspace. Issue 3 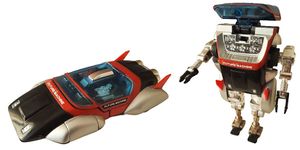 Psycho was released by Tonka in the first series of GoBots, and converts from robot to futuristic concept sports car in 9 steps. The toy was a repackaging of Psychoroid from Machine Robo, with the "Psychoroid" stickers modified to "Future Machine", and with the spring-loaded missile launcher disabled and filled in. Like most of the figures derived from Bandai's ScaleRobo DX line, Psycho's "head" is formed from the central portion of his vehicle mode. Unlike most of the other ScaleRobo figures, Psycho's alternate mode is of fanciful origins, being based on the "Psychoroid" vehicle from the 1980s anime series Space Cobra. Tiny figurines of Cobra and his partner, Lady Armaroid, are actually visible inside Psycho's cockpit. Also unlike the other Scale Robo figures while Psycho does feature diecast parts the entire car "shell" is made of ABS plastic. Loose samples of Psycho often have damage to the chrome and red trim around the cockpit, and the two red fins on the rear part of the car are quite fragile. He has movement in two directions at the shoulders, a little at the hips and at the knees, making him less of a statue than the other first series Super GoBots.

The European release of the figure featured the same modifications as the GoBots version. Unlike the majority of the Scale Robo DX figures which were reissued multiple times in different packaging Future Machine seems to have only been issued in the original Japanese-style landscape box. It had, however, already been issued in France as a tie-in to Space Cobra, in a box making no mention of Robo Machine.