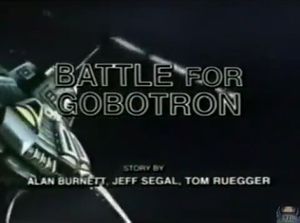 Battle for GoBotron is the original five-episode pilot mini-series for the Challenge of the GoBots cartoon. It had no overarching title when originally broadcast in the fall of 1984; when compiled into a "movie" for release on VHS in 1985, a unique title card was added that used the title of the first episode for the entire feature. Written by Alan Burnett, Jeff Segal, and Tom Ruegger, the mini-series features the majority of characters from the original 1983 GoBots toyline, and introduces audiences to the core six GoBot characters around whom the series would go on revolve, as Guardian commander Leader-1 leads Scooter and Turbo to Earth in pursuit of Renegade leader Cy-Kill and his minions Crasher and Cop-Tur. Allying with human astronauts Matt Hunter, Nick Burns, and A.J. Foster, the Guardians thwart the plans of Cy-Kill and evil human scientist Doctor Braxis to enslave the minds of every human on Earth and conquer the GoBots' homeworld of GoBotron with an army of mass-produced duplicates of the monster Zod.

Released by Karl-Lorimar's "Kideo Video" subsidiary, this release of the mini-series edited the five episodes together into a movie-length feature.

All five individual episodes released on a single disc through the Warner Bros. manufactured-on-demand "Archive Collection", remastered from the original video elements.