Challenge of the GoBots (cartoon)

Challenge of the GoBots is an animated television series that ran from 1984 to 1985, produced by Hanna-Barbera, in support of the Tonka GoBots toyline. The series consisted of 65 episodes, and aired in syndication as part of the Funtastic World of Hanna-Barbera programming block. Initially distributed by Hanna-Barbera's sister company Worldvision Enterprises (both owned by Taft Broadcasting; Worldvision was sold on and eventually was absorbed into Paramount Television), the series (as part of the entire HB library) was later acquired by Warner Brothers (along with all other Turner Entertainment assets) in 1996. 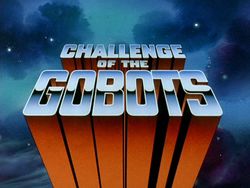 Challenge of the GoBots launched with a five-episode mini-series written by animation veterans Alan Burnett, Jeff Segal, and Tom Ruegger, which aired daily in the fall of 1984.[1] The mini-series—which would later use the title of the pilot episode, "Battle for GoBotron," as an overarching name when released on VHS—introduced audiences to the core six GoBot characters around whom the series would revolve, as Guardian commander Leader-1 led Scooter and Turbo to Earth in pursuit of Renegade leader Cy-Kill and his minions Crasher and Cop-Tur. Allying with human astronauts Matt Hunter, Nick Burns, and A.J. Foster, the Guardians thwarted the plans of Cy-Kill and evil human scientist Doctor Braxis to enslave the minds of every human on Earth and conquer the GoBots' homeworld of GoBotron with an army of mass-produced duplicates of the monster Zod. The mini-series featured, in various capacities, the majority of GoBot characters from the initial wave of the toyline from 1983, and also introduced recurring human allies Anya Turgenova and General Newcastle. 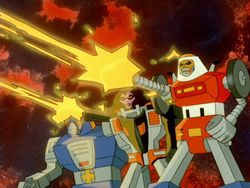 A full series of sixty episodes was soon commissioned to follow up the mini-series, giving the series 65 episodes total—the "magic number" that would get the series into weekday syndication. Segal remained as creative supervisor and story editor for the series, joined by rookie associate story editor Kelly Ward, who took the job to pay the bills while his acting career was in a lull; together, the two men co-conceived the stories of roughly two-thirds of the show's episodes, which were produced at such a pace that they often accepted first-draft scripts from the individual screenwriters which they then re-wrote themselves. Animation for the series was provided by Taiwanese-American studio Wang Film Productions, overseen by supervising director Ray Patterson, while voice direction was carried out by industry-defining master Gordon Hunt and his protege Andrea Romano. 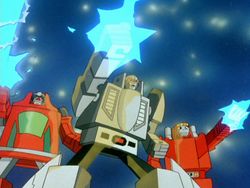 The new episodes debuted in September 1985 and ran until December of that same year. GoBotron and Earth were now allied, with the humans from the pilot mini-series serving as representatives of the global organization UNECOM, the United Earth Command. While the Guardian and Renegade trios from the mini-series remained the focal characters, the series managed to include the majority of characters from the second 1984-1985 wave of the toyline. While some characters appeared very sparsely, others attained positions as prominent recurring members of the show's supporting cast, appearing in around a third of the episodes, like the junior "fourth" member of Leader-1's team Small Foot, Guardian Council head Zeemon, high-ranking Guardian Path Finder, and Cy-Kill's loyal lieutenant Fitor. The series was almost wholly unconcerned with continuity (see "Episodes" below for more details), with characters dropping in and out seemingly at random, until the last handful of episodes, which introduced a clutch of characters from the upcoming 1986 range of figures.

A second season of the series was not produced, but it was followed on in 1986 by the theatrical movie GoBots: Battle of the Rock Lords, which featured the established core cartoon cast in an adventure that served to set up Tonka's spin-off toyline, Rock Lords.

Main article: List of Challenge of the GoBots episodes 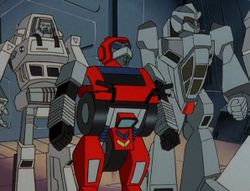 Throttle, Tri-Trak, and Twister—three members of the Secret Riders whose introduction in the final episodes of the series was fraught with continuity problems.

This list is ordered by episode airdate, which is how the series was released on DVD, but which is not the show's correct chronological story order. Though the series was not given to continuity, as broadcast, certain story beats occur out of order; this is primarily noticeable in the case of episodes #41-45, a five-part story (later titled "The GoBotron Saga" when released on VHS) which was clearly written to serve as a stage-setting premiere for the series proper. In addition to exploring the origins of the GoBots (which went unremarked on in the original mini-series), the story has the Renegades escaping capture following their arrest at the close of "The Final Conflict," and provides origin stories for the Monster GoBots and the Guardian Power Warrior Courageous, who would all appear often in the series from its earliest broadcast episodes.

The first dozen or so episodes which follow the pilot are peppered with several similar moments, such as Doctor Braxis appearing in "Genius and Son" when he will not be shown escaping jail until "Nova Beam." The last half-dozen episodes of the series, meanwhile, introduce and prominently focus on a selection of new characters from the 1986 toy range, but none of them aired in order, with characters appearing before their introductory episodes. Among these is "Mission: GoBotron," which despite airing as episode #60 seems intended to serve as a season finale.

There have been multiple attempts to organize the series into a watchable chronological order; long-time GoBots fansite Counter-X offers one suggested viewing order, while Transformers Facebook column "Ask Vector Prime" proposes another. GoBots Wiki has devised its own list, largely for our use in creating character articles, rather than to be used as a viewing guide.

As was the standard for cartoons of the time, GoBots featured one large, unchanging list of voice actors that was included in the credits for every episode, many of them regulars in the Hanna-Barbera stable of talent who did not go on to greater recognition among the bigger, more popular toys-to-toons series of the 80s. A significant number of the credited performers were one-shot guest actors, brought in to voice a single incidental human or alien, rather than a recurring GoBot, but exactly which characters many of them played is presently unclear—a situation GoBots Wiki will endeavor to improve as we grow. Those credited actors are:

Barring any potential oversights by the production team, this list includes all the actors who appeared in the series up to the episode that had last been recorded when the credits had to be assembled for the series premiere. As the last 15-20 episodes of the series were recorded after that point, however, any new actors who joined the series for those episodes (such as Dick Gautier, Jack Angel, and Dan Gilvezan) went uncredited, which makes identifying the performers behind any new characters from the final act of the series a more challenging prospect.

Challenge of the GoBots was a huge success in France, to the point that the new French-language theme tune recorded for the show ("Go Gobots") was released as a record single.

In Australia, Bandai were already selling the Machine Robo toys that Tonka had reimagined as the GoBots under the banner of Machine Men. Thus, when the cartoon was exported to Australia, it was renamed Challenge of the Machine Men and given a new theme tune derived from the GoBots toy commercial jingle.

Just as The Transformers cartoon had been imported to Japan and the franchise had supplanted the original toylines that had inspired it, the possibility of bringing GoBots to Japan was also considered. A single episode of the series was reportedly dubbed and shown at an industry trade show, but did not find success. Consequently, a home-grown anime was produced to promote the Machine Robo toyline, Revenge of Cronos, in 1986. 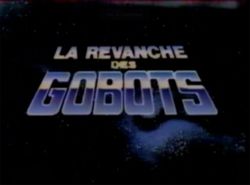 Though Hanna-Babera did not produce a second season of the series, other efforts have been made to continue its story. The first came from France in 1987, where the success of the original series was built upon by importing the Revenge of Cronos and re-dubbing it as Revenge of the GoBots, an ostensible sequel to the original show that re-imagined several of the Machine Robo characters as members of the Challenge cast.

From 2007 to 2016, Transformers license holder Fun Publications continued the adventures of the GoBots in intermittent installments of their Transformers Timelines series. These stories followed the Guardians and Renegades as they scattered across the Transformers multiverse when a mysterious cataclysm threatened their universe with destruction.

From 2015 to 2016, Fun Publications also offered a more direct continuation of the cartoon through the "Renegade Rhetoric" column on Facebook. Taking place in a separate continuity to the Timelines stories which also spun off from the cartoon, "Renegade Rhetoric" showed audiences a world where a complete "second season" of the cartoon existed, as Cy-Kill related sixty-five new prose adventures consistent in plot and tone with 1980s children's television. These stories included many obligatory of-the-time plots like characters growing to gigantic heights, travelling to bizarre futures, being turned into humans, saving Christmas, protecting the environment, and teaming up with the Harlem Globetrotters, and even featured a more dramatic five-part premiere mini-series and two-part season finale. All the remaining figures from the GoBots toyline—including both those who had not appeared in the original cartoon, and those which had not been released at all—were included in the stories, as were new characters based on Machine Robo toys that were never imported by Tonka. 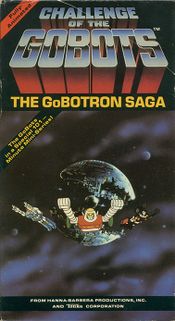 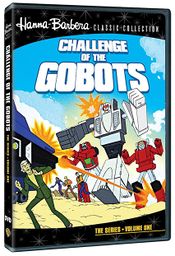 Includes "Battle for GoBotron" to "The Final Conflict," edited together into a movie

Includes "Invasion from the 21st Level" Parts I and II

Includes "Speed Is of the Essence," "Renegade Alliance," and "Cold Spell"

Includes "The Secret of Halley's Comet," "The Gift," and "Crime Wave"

Includes "Cy-Kill's Escape" to "Return to GoBotron," edited together into a movie

The entire series received its first DVD release as part of Warner Brothers' "Archive Collection" program, which manufactures discs on demand. For this release, the series was remasted from original film elements.

Includes "Battle for GoBotron" to "The Final Conflict"