Peace in our time? Not if Turbo has anything to say about it! 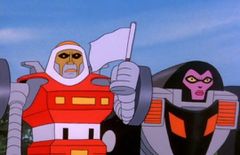 Leader-1, Wrong Way, Turbo and Scooter find a secret Renegade base on Earth, guarded by Tank, Geeper-Creeper, Screw Head and BuggyMan. However the Renegades disappear mid-battle; above Cy-Kill and Crasher are observing the action - the disappearances are due to their new personal stealth devices. However, Cy-Kill then flies down and raises a white flag to Crasher's disgust and confusion, telling Leader-1 he wants to open peace talks. The Guardians suspect a trick but Cy-Kill is insistent, even preventing Crasher from shooting anyone. While wary, Leader-1 agrees to a peace conference with Cy-Kill. Turbo reacts furiously while Scooter continues work on a new stealth decoder. A preliminary conference is agreed, with Leader-1 guaranteeing the Renegades' safety while in GoBotolis. However, he orders the unhappy Turbo to stay away from the meeting. Hans-Cuff and Night Ranger patrol GoBotolis along with Crasher and Cop-Tur ahead of the talks but a suspicious Turbo sneaks past to get to the bottom of things. At the talks Cy-Kill agrees that Earth should be involved in the conference proper and agrees to release Guardian prisoners as an act of goodwill. Meanwhile Turbo is found and pursued by Scales; Hans-Cuff detects the intruders and is ordered to destroy them. Night Ranger then prepares to opens fire on Turbo. 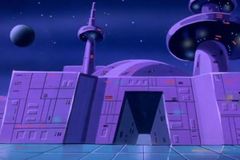 Hans-Cuff realises who the intruder is but a furious Cy-Kill orders him destroyed, only for Leader-1 to spot Scales. Cy-Kill relents when Leader-1 suggests Scales would have to face the same penalty as Turbo, and the Renegade leader specifies the recalcitrant Guardian prove himself by taking part in the prisoner handover. The full conference is to take place in Vienna, with General Newcastle sending Matt, Nick and A.J. to help preparations. The UNECOM personnel concur with Turbo and Scooter that Cy-Kill is up to something. Leader-1 agrees it's possible but feels the chance of peace is worth the gamble; cross with Turbo's attitude he assigns Scooter to join him on the prisoner pick-up. Scooter for his part continues work on his stealth decoder, and when Cy-Kill hands the prisoners over it shows Tank, Geeper-Creeper and Screw Head are at the handover as well - but immediately burns out. Cy-Kill orders a stop to the fighting, planning to tell Leader-1 of Turbo's actions. Back at the Command Center Leader-1 castigates Turbo and Scooter, believing Cy-Kill was justified, and sends the pair to help set up the peace conference. Thruster arrives in Austria, with Crasher spotting Turbo, Scooter, Matt, Nick and A.J. crossing the Alps and causing an avalanche. 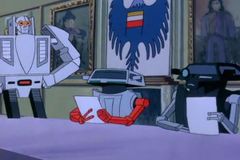 A furious Cy-Kill orders Cop-Tur and Crasher to rescue the group from the avalanche, saving them. They carry on to the conference, where Nick mucks around on a throne and inadvertently activates an ancient secret door, which Turbo follows with Matt, Nick and A.J. - only for the door to shut and trap them. Leader-1, Professor Von Joy and Newcastle arrive in the Command Center and are furious that Scooter's lost contact with Turbo. Meanwhile through peepholes out of the chamber Turbo and the humans spot Cy-Kill, Crasher, Cop-Tur and Dr. Go - who hands out personal stealth devices to his fellow Renegades and finally reveals his plan to use the conference to assassinate Leader-1 and Newcastle. With Matt and the kids backing him up Turbo is finally able to get Leader-1 to listen. The conference seemingly goes ahead and Cy-Kill signs a peace treaty, only to immediately destroy it and reveal his true plans before he, Crasher and Cop-Tur activate their stealth devices. The Guardians attempt to battle them but are unable to see the Renegades; Crasher soon takes Path Finder out and throws a chair at Leader-1 but then Scooter activates his repaired detector - revealing Screw Head, Tank, Scorp and Geeper-Creeper are present. His ruse foiled, Cy-Kill orders a retreat - but not before blasting the stealth decoder. Leader-1 apologises to Turbo for doubting him and proclaims his team-mates to be heroes, and that together they will defeat the Renegades - something Crasher believes to be unlikely.

"I don't believe my optical receptors! Cy-Kill's giving up!" 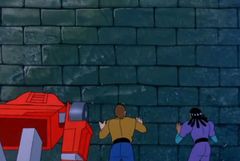 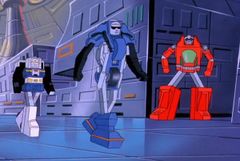 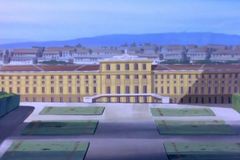 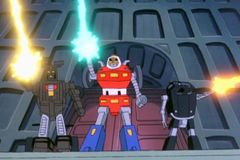