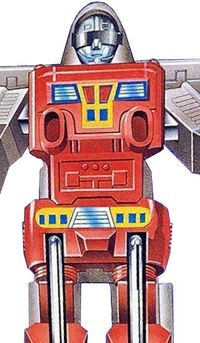 Water Walk is a Renegade.

After the Renegades took control of GoBotron, Water Walk and Fly Trap were tasked with manning a gun turret to watch the skies for any Guardian stragglers. However when the Last Engineer appeared onboard Courageous, taking Leader-1, Small Foot, Matt Hunter, A.J. Foster and Nick Burns to safety, they were unable to hit the nimble craft, which escaped into hyperspeed and was able to get to Earth. Flight to Earth

Water Walk was later called down to Earth by Cy-Kill to operate from the Renegades' new undersea Starfish base off Micronesia. His task was to locate merchant shipping for the Renegades to capture and pillage. The Guardians soon came to the area to investigate, but Water Walk was able to draw Flip Top away from guarding the SS Vega, enabling it to be taken down to the Starfish. The Guardians then resorted to hiding onboard a ship sent out as bait. This time it was Flip Top who drew Water Walk away, scoring hits on the Renegade after a running overseas battle while the other Guardians forced the Starfish to the surface, forcing the Renegades to abandon their new base as it was surrounded by UNECOM warships.Depth Charge

During the Diaspora, Water Walk was dispatched to Level 63 along with an assortment of Guardians and Renegades. Cultural Appropriation

Cy-Kill considered Water Walk a fine example of superior GoBot variety when it comes to alternate modes. Renegade Rhetoric 2015/10/14 Water Walk was one of the Renegades in Cy-Kill's entourage when he entered the U.S. Presidential race in order to secretly install the other candidates with Indoctrination Chips. Unfortunately, their ploy was uncovered and the Renegades were driven off. Cy-Kill For President Using a supercharged Astro-Beam, the Renegades stole away the Communication Moon of Gobotron, leaving Cy-Kill and his handpicked squad free to pilfer its secrets for 48 hours. Unfortunately, they didn't realize Leader-1 had also been pulled away by the Astro-Beam, and was secretly working against them inside the moon. Water Walk was one of the first Renegades eliminated by Leader-1 as he McClane'ed his way around and towards Cy-Kill. The Stolen Moon Water Walk brought Cy-Kill a communications report when the Renegades tapped into transmissions between Scooter and Nuggit on Quartex. This report clued Cy-Kill in to the existence of the Fossil Lord and his people's combiner form, Fossilsaurus. Fossil Fallout Water Walk was one of the Renegades Cy-Kill brought to Mount Hotaka to learn ninjitsu from the Ashi Dojo. He proved highly effective for a time, but when Leader-1 learned ninjitsu as well, the Renegades were outmatched again. A mishap with the positronic jammer also wiped all the ninja knowledge from the GoBots' minds by the end of the conflict. Cy-Kill's Ninjas

As Sideways and Gong played with mixing universal streams, the Renegades staged an all-out assault on Autobot City on Earth. Water Walk was one of the Renegades fighting to breach the Autobot defenses. Springer took a shot at him during the invasion, but missed. Echoes and Fragments 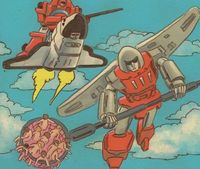 Water Walk was one of the Renegade Go-Bots that flocked to Cy-Kill in the desert near Route 66, helping surround and subdue the US government Go-Bot Leader-1 and retrieve military secrets from his brain Issue 1 and later joined his fellow Renegades in confronting Leader-1's own army of Go-Bots. Issue 2 Many, many, many years later he was still in Cy-Kill's service, and along with Warpath was dispatched to capture the now-primitive humans for the Renegade leader's experiments. Turbo and Spay-C tried to stop them, with the shuttle Go-Bot giving Turbo a lift so he could wrestle with Water Walk. Turbo got the humans back, though what happened to Water Walk is unknown. Issue 4 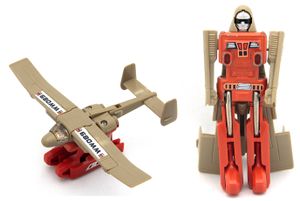 Water Walk was released by Tonka in the second series of GoBots, and converts from robot to seaplane in 9 steps. The toy was a recolour of Cessna Robo from Machine Robo, with a new beige/dark orange colour scheme (one of the first GoBots toys to feature a brand new deco) and heavily modified stickers. Water Walk has a pleasing transformation and a relative lack of weakness for a GoBot of the era. And good shoulder articulation.

Water Walk was planned to be included in a Gift Pack along with Cy-Kill and Slicks which was advertised in the 1985 Tonka catalogue but was ultimately not released. 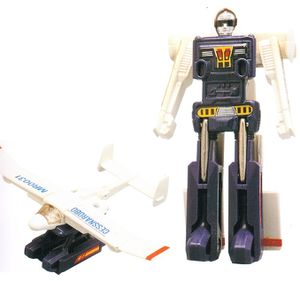 The European release of Water Walk was initially based on the Japanese release in white and dark blue, though later in the line some unsold North American overstock was packaged on unchanged cards.

The first toy from the fourth wave of figures, Cessna Man was released by Bandai Australia in 1984. He remained identical to the original Cessna Robo toy's white and dark blue variant, and was packaged on a blue backing card.

Later in 1984, the figure was re-released with his GoBots name and faction on a new black backing card depicting a blue-tinted alien landscape.

The white/blue version of figure was reissued by Bandai in Europe during 1993 as part of the first series of Robo Machines. For trademark reasons the figure was renamed simply Light Plane in the British market, with localised versions of the name used in other markets. Sadly, like most of the Robo Machines figures Light Plane uses poor quality materials and suffers from mould degradation.