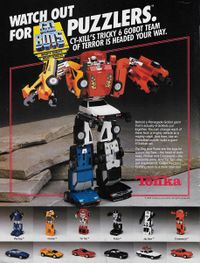 The Puzzlers are a team of Renegades that form Puzzler. They may or may not be mere robots rather than GoBots.

Cy-Kill devised the Puzzlers on Earth as components of the giant robot Puzzler, built to counter the Guardian Power Warrior Courageous. He enlisted the Monster GoBots to steal material from various facilities and for reasons only known to himself enlisted Larry E. Cocoa to sell the disguised Puzzlers through his car dealership. The raids attracted Guardian attention while Larry's overbearing wife Hilda took control of the Puzzlers' remote and turned them on the Renegades in an effort to get more money out of the deal. She even commanded them to assemble but after all that even when the Renegades regained control of the giant, Puzzler was no match for Courageous and was knocked into its components. The further fate of the Puzzlers is unknown. Auto Madic

Imports of the six modules of Machine Puzzler, the Puzzlers were issued individually on blister cards by Tonka in 1985 as part of GoBots. The toys were first released in the second series (#7256) and remained available for the rest of the line's life on toy shelves. A giftset containing all six members was also released. The toys notably required no additional parts to combine. For more details see each member's individual page.