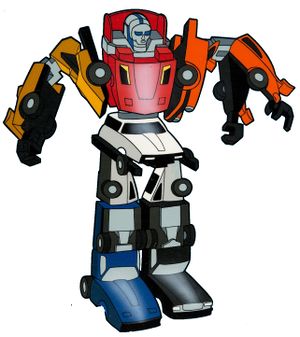 Puzzler is the giant combined form of the Renegade Puzzlers Tic Tac, Pocket, Crossword, Jig Saw, Rube, and Zig Zag. Sometimes it is the latest secret recruit, made up of six skilled members with the Guardians' only hope being to prevent it from being assembled.

Other times it's a bunch of remote-control robots built by Cy-Kill in Detroit that achieved even less than many of his other zany devices. 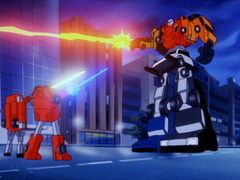 Frustrated at the Renegades' frequent defeats to the Guardian Power Warrior Courageous, Cy-Kill decided to counter them by building six new robots that would combine to form the giant Puzzler. Materials were acquired from around America and the hapless car dealer Larry E. Cocoa was enlisted to act as a front man for the purchase of a factory to make the remote control robots. The individual robots were then sold under the guise of cars via Cocoa's auto dealership. The project came to the attention of the Guardians, who interfered with the material gathering - preventing Cy-Kill from making multiple Puzzlers. Soon after Larry's greedy, overbearing wife Hilda seizes the remote in an attempt to extort more money from the Renegades. The Puzzler Pieces were briefly turned on the Renegades until Hilda accidentally combines them. The out-of-control Puzzler attracted the Guardians but was powerful enough to keep Leader-1, Turbo and Staks on the back foot until Path Finder was able to Astrobeam the Power Suits in to help, and Courageous was able to defeat Puzzler after a short battle. Auto Madic

Tic Tac and company briefly formed Puzzler aboard Astrotrain, as the Renegades and Decepticons fought over who would be the new leader. Echoes and Fragments

To be part of his Thirteen Great Demon Generals, Bio Ranger Iga collected Puzzler's components from Gargent 1184.10 Gamma and permanently fused them into Puzzler. While the individual components didn't take kindly to the process, Puzzler swore loyalty to Iga for his continued and unbroken existence. Ask Vector Prime, 2015/06/27 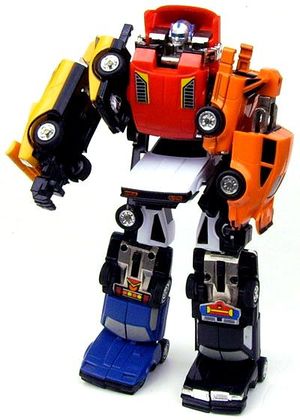 A straight import of the Machine Robo Machine Puzzler, Puzzler is formed from six smaller toys, with Tic Tac and Jig Saw forming the body, Pocket and Crossword as the arms, and Rube and Zig Zag as the legs. The figures were available both on individual blister cards with a single design featuring art of the combined Puzzler, or as a giftset. Puzzler's instructions show Rube as the right leg and Zig Zag as the left, but the box art has them in the opposite positions. They can be attached in either configuration. While Pocket and Crossword both use identical connectors switching the arms over results in the sculpted fists being upside down. Puzzler is a mix of diecast and ABS plastic. The Western releases all omit the additional belts to help the stability of the combined mode that were included in the Japanese release.
Sadly, despite some laudable design features - such as all the combined robot parts being integrated into the smaller figures, requiring no additional parts - Puzzler suffers from several major flaws.
The upper torso relies on Tic Tac being folded in half and clipped in position via a metal hoop and thus pinching the connectors on Crossword and Pocket in position. However, Tic Tac's rubber tyres prevent the fit from ever being uniform, resulting in a varying degree of tightness. This is further amplified by the connectors being diecast and the housings being chromed plastic, which can cause wear easily. Furthermore, due to the forces involved, leaving Puzzler in combined form for a long period of time can deform Tic Tac's tyres. Just as alarmingly the weight of the top half of the giant - comprising three figures - is entirely held by Jig Saw's chrome light bar. While snapping of the light bar is rare, any wear to this part - common with loose examples - compromises the strength of the fit, and a damaged light bar makes Puzzler impossible to form. More generally the easily worn areas of the limb parts are carried over to the combined form. The waists of Pocket and Crossword form Puzzler's elbows and can lose friction. The same problem applies to the use of Rube and Zig Zag's legs as the giant's ankles and feet; while the weight of the figure keeps them in place on a flat service lifting Puzzler up can lead to one, some or all of these pieces sliding out of position. The rubber belts added to the Japanese release to aid stability were not included in any of the Western releases.
In short, more than most vintage GoBots figures Puzzler benefits from being bought MISB/MOSC.

The Puzzler robots were issued mounted on a new style blister card in Europe displaying a neon green graphic of the combined form. Unlike the GoBots release the cards bore a number as well as the name.

Only available separately, the figures remained identical to their Machine Robo/GoBots counterparts.

The six Puzzler toys were released as Friendly Machine Men by Bandai Australia in 1985. Only available separately, the figures remained identical to their Machine Robo counterparts, using a similar card back to the European release. 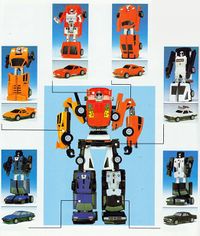 Prototype version as pictured in some catalogues.
Retrieved from "http://gbwiki.shoutwiki.com/w/index.php?title=Puzzler&oldid=22158"
Categories: