Pocket is the right arm of the giant Puzzler. His lightning reflexes make him a martial arts master.

The six robotic Puzzlers were built on Earth by Cy-Kill as a counter to the Guardian Power Warrior, using the car dealership of Larry E. Cocoa as a front. For the next stage of his plan, Cy-Kill had Cocoa sell the vehicles to unsuspecting customers, shifting five of them easily. However, Larry's wife Hilda felt the Cocoas deserved more money for their part in the scheme, and when a distracted Cy-Kill was indifferent she seized the remote that controlled the Puzzlers and the pair escaped in the remaining unsold car - Pocket. With Cy-Kill, Crasher and Cop-Tur in pursuit, Larry drove while Hilda jabbed at the remote control, unwittingly activating the other five units. All six converged and the Cocoas were thrown out as the cars converted to robot mode then combined to form Puzzler. In the chaos Cy-Kill took back the remote but the Guardians were able to call up the Power Warrior Courageous to shake the robot apart. Auto Madic

Along with his fellow Puzzlers, Pocket was summoned to join Cy-Kill and Herr Fiend in the Arctic as the next stage of the Renegades' plan to conquer Earth.GoBots

Cy-Kill discovered the means of using these "positronic energy matrices", as he called them, to bring life to his old Puzzler drones by encasing them in a laser containment field and animated by Space Lightning drawn down by Rogue Star and its Stellar Fulminator Rod. What's more, each new Renegade had access to Mighty Skills as a result of their unique origins. Pocket, who came from the spark of Banzaitron, demonstrated Super Karate speed.

The Renegades schemed to ambush and destroy the Power Warrior Courageous with their new combiner advantage. Monsterous was openly deployed to rampage through Philadelphia, with the hope of drawing out the Guardians and then having Puzzler attack from the opposite side, flanking Courageous when it arrived. Unfortunately, the Guardians realized Cy-Kill's plan after he liberated the wreckage of Puzzler from GoBotron. They kept Rube from reaching Courageous, leaving Cy-Kill with only Monsterous and a one-legged Puzzler. The Renegades retreated in embarrassment. Six Heads are Better than One Cy-Kill, Pocket, and Re-Volt commanded a trio of Thrusters to attack the Scientific Moon of GoBotron. While Cy-Kill and Re-Volt engaged the Secret Riders' Command Center, Pocket swooped down to steal the Macrocosmic Continuum Distorter. Squabbling between the Secret Riders and their rival unit, the Robo Rebels, led the two Guardian teams to foolishly pursue Pocket's Thruster into enemy territory to retrieve the device. The Renegades trapped the Command Centers in a trap and pulled them aboard Roguestar. Riders and Rebels The Renegades planned to interrupt the tri-planet alliance treaty on Quartex. Using the power of Puzzler, Monsterous, and the newly activated Nemesis, the Renegades overpowered the Guardians' two combiners Courageous and Fossilsaurus. Combiner Wars Part 1 Once they regrouped, however, the Guardians and their allies came up with a plan to defeat Cy-Kill's combiner advantage. Combiner Wars Part 2

In one reality, Pocket and the Puzzler components were permanently fused into their gestalt form by Bio Ranger Iga. Their individuality was lost, but a grateful Puzzler joined Iga as his Cybernetic Subjugation General. Ask Vector Prime, 2015/07/15

As Sideways and Gong played havoc with the walls of reality, the Renegades launched an all-out assault on Autobot City on Earth. Later, after the combined Renegade and Decepticon forces fled Earth onboard Astrotrain, Zero disposed of Megatron and declared himself the new leader. The Puzzler troopers objected, and attempted to claim command with their Mighty Robot gestalt. Zero was nevertheless successful in the end, and the Puzzlers blew trumpets at his coronation later that night. After Galvatron seized control of the Renegade and Decepticons from Zero, he led them to Quartex in pursuit of Major Mo and the Guardian Matrix of Leadership. Jigsaw and Pocket confronted Nick Burns and A.J. Foster on the planet of rock, but lost the kids when they converted their exo-suits. Echoes and Fragments 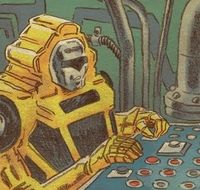 Pocket joined up with Cy-Kill's band of Renegade Go-Bots when they were a band of desert outlaws, raiding along Route 66. When the movement turned into a full uprising Pocket and Crossword were given the task of destroying the military Go-Bot Leader-1 at a junkyard, taking no small pleasure in operating the machine while Crossword dropped him in via crane. However, Leader-1 revived and was able to prevent the machine from destroying him before flying out. He threw Pocket and Crossword into the crusher and used it on them, deaf to their pathetic pleas for mercy.Issue 2 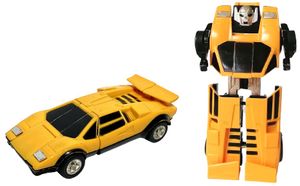 Pocket was released by Tonka in the second series of GoBots, and converts from robot to Lamborghini Countach sportscar in 4 steps. The toy was a repackaging of the Countach LP500S figure from Machine Puzzler from Bandai's Machine Robo line, with no significant changes. Pocket has articulation in the shoulders and waist, though the joints can wear lose. He also becomes the right arm of Puzzler; the right fist itself is contained within him.

Pocket was released in Europe as part of Robo Machine with no significant changes from the American release.

Pocket was released in Australia as part of Machine Men with no significant changes from the American release - though the whole team was assigned to the Friendly faction.