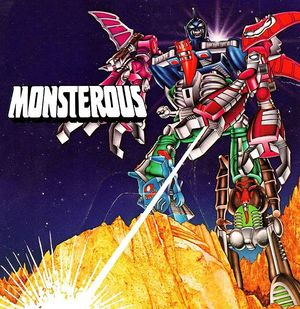 From the deepest parts of the Antares star system, six monster Renegades band together and combine to form the vicious giant, Monsterous! This being's cruel and violent nature rivals even the most evil of beings in the galaxy, and he currently has one goal in mind: the total destruction of the planet Earth!

Monsterous is the giant combined form of: 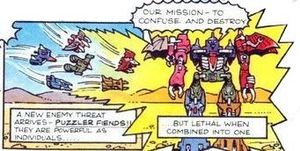 In Axiom Nexus, Cy-Kill ran into six Predacon criminals from the Uniend Cluster and defeated their leader Fright Face in single combat, earning their loyalty. Impressed by his new troopers, Cy-Kill recreated the combination technology he once used for Puzzler, allowing the Predacons to unite and form Monsterous. Cy-Kill brought Monsterous with him back to Level 1 when he escaped from Axiom Nexus. Renegade Rhetoric, 2015/10/21 Cy-Kill and his new recruits emerged in the midst of an epic battle between the Guardian fleet and Rogue Star. Monsterous gleefully tore through the surprised Courageous before turning on the Command Centers. Unfortunately, Leader-1 tricked Cy-Kill into firing a killing shot at him, which he dodged so that it hit Monsterous instead. This respite allowed the Guardians to retreat, but the Renegades had clearly won the day. Opportunity Knocks Part 2

Cy-Kill dispatched the creature warriors to Philadelphia as Monsterous to draw Courageous out for another battle, but Monsterous was overwhelmed by a squad of Guardian Boomers. Six Heads are Better than One Cy-Kill brought Monsterous to an ambush to try and seize a matter transmutation ring, but the surprise appearance of Courageous made it a fair fight, and so the Renegades retreated again. One Born Every Minute When the Guardians and UNECOM came to Quartex to sign a tri-planet alliance treaty with Boulder's Rock Lords, Cy-Kill and Magmar decided to intervene. Monsterous and Puzzler were pitted against Courageous and the Fossil Lord's Fossilsaurus until Cy-Kill tipped his hand and revealed the Renegade Power Suit Warrior, Nemesis. Combiner Wars Part 1 The forces of good rallied, however, and prepared a counter-strike. Monsterous was diverted into battle with the Action Shock Rocks, leaving Courageous and Fossilsaurus evenly pitted against Nemesis and Puzzler in the rematch. Combiner Wars Part 2 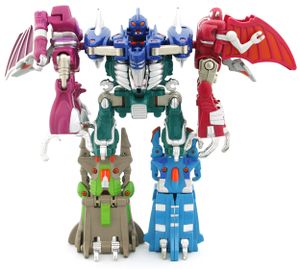 Monsterous was released by Tonka in the third series of GoBots, a giant robot made up of the six Monsterous members - Fright Face and Heart Attack forming the body, South Claw and Weird Wing as the arms, and Gore Jaw and Fangs as the legs. Monsterous's components were available either individually or as a set. The toy was a recolour of Devil Satan 6 from Revenge of Cronos, with a much-changed colour scheme; it is unclear which was the original release. Like Puzzler, Monsterous requires no additional parts, with the head, hands/claws and feet all formed from the individual members. Unlike Puzzler he has some rigidity, being solid enough to make use of the articulated shoulders, elbows and claws and very low on weak points, with all the connections being secure and sturdy. However the trade-off for this is the simpler team members, which -aside from South Claw and Weird Wing - have much less articulation than any other figures in the range of their size. As with Puzzler the arm and leg components are reversible if desired. 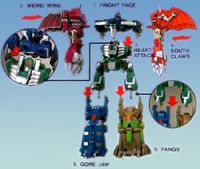 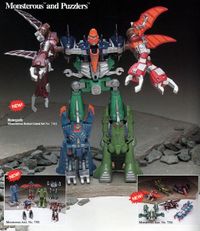