Whilst lesser toylines like Transformers were insecure enough to turn into things like tank or planes or cars, Rock Lords doubled down on being POWERFUL LIVING ROCKS, transforming into rocks, stones, and boulders. Released in 1986 by Tonka in the U.S. and Bandai in Europe and Japan, the Rock Lords spun out of the adventures of the GoBots, launching in the West as part of the Battle of the Rock Lords movie and in Japan as part of the Machine Robo: Revenge of Cronos cartoon.

The Rock Lords toys were actually really well-made, and do not deserve the sneers often aimed at it. As Oscar Wilde famously put it: "We are all in the gutter, but some of us are playing with Rock Lords".

Sentient polymorphic rocks! They're here to hollow out the planet!

Gobots: Battle of the Rock Lords[edit]

In 1986, there was only one movie about transforming alien robots that was on everyone’s lips: GoBots: Battle of the Rock Lords. Like the cartoon, it was produced by Hanna-Barbara, and was the last of their work on GoBots. Beating The Transformers: The Movie to the screen by five months, it caused some movie reviewers (such as the noted critic Leonard Maltin) to suggest that Transformers was trying to cash in on the GoBots fame. Yeah, take that!

The movie focuses on launching the Rock Lords franchise with Rock Lords Solitaire and Nuggit travelling to GoBotron to ask for help in stopping the evil Magmar, a warlord on the planet Quartex busy collecting weapons of mass destruction. Leader-1 immediately launches an invasion of Quartex in the name of freedom, roughs up Magmar a bit, and then legs it.

Blue, Child of the Earth[edit]

This was a real thing that actually happened

In 1986, French artist Philippe Druillet was given a television show to exert complete control over. It was titled Bleu, l'Enfant de la Terre ("Blue, Child of the Earth") and was about a Silver Surfer-esque character fighting evil in a post apocalyptic world.

However, the production company IDDH had a deal with Bandai and so was forced to put Rock Lords into it. The first episode features a 12 minute segment of Rock Lords happily playing on the beach, watched over by a lion from Voltron. And that is how you sell out.

Rock Lords in this series were unlike the Rock Lords we know and love—they were tiny, fist-sized people who could fly about in rock mode. Once the main action begins, they run away.

The show was beset by production woes and eventually limped onto screens in 1990, way past Rockmania. It was also dubbed into English and shown in the UK in several obscure time slots.

The Revenge of the Gobots[edit]

You don't deserve to know my name! Oh, it's Nick

After a test dub of GoBots at an industry trade show failed to garner appeal, Bandai decided to make their own GoBots cartoon for Japan. Machine Robo: Revenge of Cronos bore little relation to Gobots despite sharing the same toyline. However this did not stop the French (who evidently loved GoBots and Rock Lords), who brought the cartoon over to France as a dub entitled La Revanche des GoBots ("The Revenge of the GoBots") set after the events of Challenge of the Gobots, with Nick becoming Rom Stol, Fitor becoming Blue Jet, and Cy-Kill becoming a good guy! 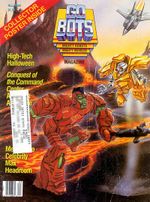 Official GoBots Magazine was a quarterly publication devoted to all things GoBots. It lasted for five issues before being cancelled, and subscribers received the Official Statue of Liberty Magazine in its place.

The last two issues of the magazine featured a Rock Lords comic strip by artist Paul Kirchner. Issue four features an exciting cover with Magmar battling his age-old foe, Nuggit. It also has a five page comic titled "Conquest of the Command Centre". The Rock Lords and GoBots hang out together in this comic, obviously already good friends!

Magmar and Cy-Kill team up to infiltrate the GoBots' base using the good old Trojan Horse routine, which of course the good guys fall for. Luckily Nuggit and Scooter had been reading a book about Greek history and foiled the plan!

Issue five has a one page comic titled "Update from Quartex". It opens on a cliffhanger (though there was no previous story that this follows on from). Magmar is about to beat the good Rock Lords when Nuggit turns up with an army of Rockasaurs, causing the villains to flee.

Paul Kirchner clearly really liked Nuggit. But then again, literally every other Rock Lords writer seems to have made him the hero! 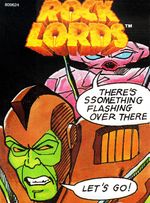 This is the one you didn't own

Probably the most famous of Rock Lords media outside of the movie, there were two minicomics available with the Rock Lords toys to help children realise they needed to buy more Rock Lords.

The first comic is the most well-known, being available with the series 1 and 2 toys. Titled "Powerful Living Rocks Face a Deadly New Peril", the adventure sees Magmar discover a new weapon at the fortress of Stonehead—the dreaded Cryon Ray!

The Cryon Ray freezes Boulder and his friends in rock mode, rendering them helpless. It is down to Nuggit to save the day. He does this by pressing a random button on his chest that emits a ray that defeats the villains and restores his friends. And people say that drama is dead!

The second comic is much rarer, having come with later toys. It has no title, the cover being a random panel from the main story and so can be called "There's Ssomething Flashing over There".

He is defeated when Sunstone uses his never before mentioned magic powers and switches the crystal for a projection.

Challenge of the Machine Men[edit]

Challenge of the Machine Men is an eight page minicomic advertising Machine Men, the Australian release of GoBots. A battle between the good and evil Machine Men is interrupted as the Australian army drop a nuke on them! This unleashes the Rock Lords! The Rock Lords appear with their prototype designs and names, and the comic ends with a chilling cliffhanger revealing that the dreaded Narlies are going to attack!

The end of the comic claimed there would be a "next issue" but it has never surfaced. Presumably the Narlies killed them all.