Transformers: Renegade Rhetoric is an online question-and-answer column produced by Fun Publications, published on Facebook from October 2015 to February 2016. Originating as a spin-off of the Transformers column "Ask Vector Prime," the feature was set in the continuity of the Challenge of the GoBots cartoon, and involved Cy-Kill responding to inquiries sent in by real-life readers. It depicted a fictitious "second season" of the GoBots cartoon, featuring 65 brand-new short prose "episodes" deliberately written in the cheesy style of 1980s children's cartoons. 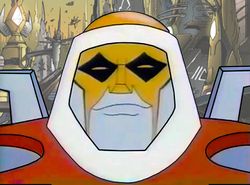 Following an accident with an Anti-Phase-Displacer Blaster, Cy-Kill was transported to the city of Axiom Nexus on the planet Cybertron. After spending a few months there, he was hired by Axiom Nexus News as the fifth in series of guest columnists to take over the network's "Ask Vector Prime" feature while its regular host was on sabbatical. Cy-Kill answered readers' questions from October 13 to 21, 2015, touching upon past exploits from the Challenge of the GoBots cartoon, while also relating multiple new adventures that were described as having taken place after the events of GoBots: Battle of the Rock Lords.

Off the air, Cy-Kill recruited several disenfranchised Transformers from throughout Axiom Nexus to the Renegade side, and even bombed a government building. Unfortunately, he thought he could get away with boasting about it in his column, but it turned out the police actually paid attention and tried to arrest him, leading him to flee back to his home realm with the aid of Gong. Though back home, he brought "Renegade Rhetoric" back to the air by hacking into the Axiom Nexus airwaves, to continue spreading Renegade propaganda. From November 2, 2015 to February 5, 2016, Cy-Kill continued to relate story after story of his battles against the Guardians and the various new GoBots and Rock Lords they involved.

In addition to the pre-existing Challenge of the GoBots cast, Renegade Rhetoric incorporated into its stories virtually every figure from the GoBots and Rock Lords toyline that did not make it into the cartoon and movie, including straggling characters from earlier in the series, and ones who were released too late to be included in the show. This included the half-dozen figures available exclusively at Wendy's, and several combiners, playsets, and "creature" toys that were not released at all. Additionally, the stories created a group of brand new characters based on the small handful of Machine Robo figures that were never released as part of the GoBots line.