Apollo is a lost GoBot who returned to GoBotron to become a Guardian long after the Renegade conflict began.

During the Diaspora, Apollo was dispatched to Level 29 along with an assortment of Guardians and Renegades. Cultural Appropriation

Cy-Kill once reported Sky-Jack narrowly avoided getting caught by a Guardian while tapping into Earth's television broadcasting satellites. According to Cy-Kill, it may have been Spay-C, Path Finder, or Apollo. Since Apollo hadn't joined the Guardians yet at this time, though, it probably wasn't him. Cy-Kill For President

Apollo was a member of a deep space expedition crew, GoBots who left GoBotron shortly after the catastrophe that forced the populace into cybernetic upgrades. His crew were returning from their mission when they were spotted and attacked by Renegade Space Hawks. Apollo was the only one to escape, and he made the last leg of the journey to GoBotron, recruiting Leader-1 and the Guardians to aid his crew. They succeeded in rescuing Captain Hi-Way, Jack Attack, and Bullet, but two of Apollo's crewmates, Decker Decker and Vain Train, decided to join the Renegades instead. Brother's Keeper

Apollo and Matt Hunter developed a friendly relationship (no doubt thanks to Matt's history with NASA), and were known to watch movies together. This helped Matt recognize the Renegade disguise artist, Jig Saw, when he attempted to pose as Apollo and infiltrate Cape Canaveral. In Zod We Trust

As Sideways and Gong manipulated quantum strings to tie together two universal streams, the Decepticons staged an all-out assault on Guardian City on Earth. Apollo was destroyed by the superior space-farer, Astrotrain. Echoes and Fragments 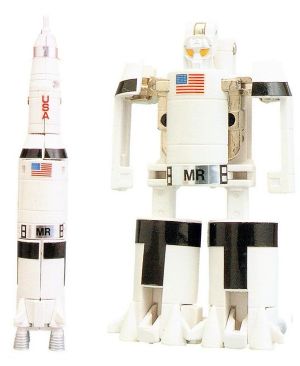 Robo Machine Apollo was a straight import of the Machine Robo Apollo Robo, released in Europe in 1986 with no changes from the Japanese release.

He was retroactively added to GoBots continuity by Renegade Rhetoric.