Vain Train became a Renegade in order to escape his brother Bullet's constant bullying. Cy-Kill frequently partners him with Loco, for obvious reasons, or Crain Brain, for even more obvious reasons. 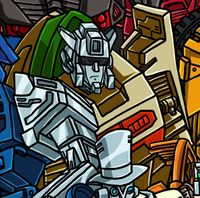 During the Diaspora, Vain Train was dispatched to Level 29 along with an assortment of Guardians and Renegades. Cultural Appropriation

Vain Train and Loco learned of the legendary Fountain of Youth hidden away at the Los Jóvenes Dude Ranch in the American West, after spying on the Robo Rebels' vacation. They siphoned out the waters and isolated an anti-chroniton agglutination from the liquid. Loco used the substance to freeze his structure in time, making him practically invulnerable. Vain Train wanted to use the substance too, but the selfish Loco locked it up before attacking the Robo Rebels. Unfortunately for the Renegades, Bent Wing and Raizor distracted Loco while Tail Pipe and Super Couper disabled Vain Train and found a way to reverse the agglutination's effects. The Renegade rail engines were forced to flee empty-handed. Going Loco

Vain Train's use in Going Loco amounts to an error in the Renegade Rhetoric episode order, since his origin story from Brother's Keeper would not take place until later in the "airing".

After an absence of thousands of years, Vain Train and his brother Bullet were returning to GoBotron from a deep space exploration mission with their crew. The long mission had only exacerbated the rivalry and bad feelings between the brothers. Before they could reach home, however, they were attacked by Renegades. Their ship was disabled by Space Hawks and brought aboard Roguestar. Cy-Kill noticed the tension between Bullet and Vain Train and plotted to take advantage of it. He secretly used his mind control powers to make Bullet bully Vain Train more than usual. With the stage set, Crasher stepped in and convinced Vain Train to sign on for the Renegades. Bullet and most of the rest of the crew ended up joining the Guardians, which only further separated the two brothers. Brother's Keeper

Using a modified Astro-Beam, Cy-Kill managed to transport the entire Communication Moon of GoBotron away from Guardian-controlled space. He brought Vain Train and a team of Renegades to the moon to plunder its secrets, unaware that Leader-1 was caught in the Astro-Beam effect too. Leader-1 disabled Vain Train and Cy-Kill's other five lackeys before confronting the Renegade leader himself. The Stolen Moon

As Sideways and Gong played with mixing universal streams, the Renegades staged an all-out assault on Autobot City on Earth. Vain Train was one of the Renegades fighting to breach the Autobot defenses. Echoes and Fragments 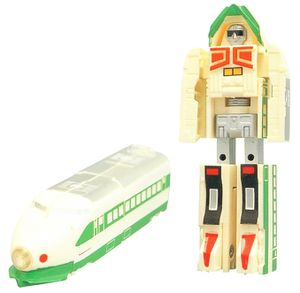 The figure never released outside of Japan, likely as bullet trains weren't well-known in other parts of the world at the time. However, it was later repurposed as the GoBot Vain Train by Fun Publications.