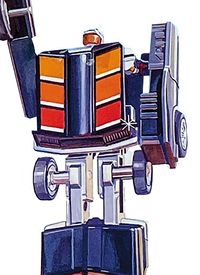 Tail Pipe is a Guardian. Whether he lives up to his name is sadly unknown.

During the Diaspora, Tail Pipe was dispatched to Level 34 along with the Robo Rebels and several evil Rock Lords. Cultural Appropriation

The meek and timid Tail Pipe wanted to become a Guardian, but he worried too much about what others thought of him, and had trouble asserting himself or making decisions. This was a particular problem in his Guardian Academy class alongside his gregarious and outgoing fellow cadets, Bent Wing, Raizor, and Super Couper. After messing up constantly in training exercises, and even suffering a Renegade surprise attack during the last one, these "Robo Rebel" cadets came under suspicion from the Guardian Council as potential Renegade spies. Tail Pipe reluctantly went along with his fellow cadets when they disobeyed orders to remain in their quarters, and went looking for proof that someone else alerted the Renegades to the last training mission. At the Guardian Council chambers, Tail Pipe perused the computer records and determined only their training instructor, Major Mo, and Councilor Bladez knew the location of the last exercise in advance. Before they could digest this information, the cadets heard a commotion and rushed to an adjoining room to find High Councilor Zeemon blasted and neat death. The Council's security force arrived moments later, apparently catching the Robo Rebels in the act! Rebels Without A Circuit

Tail Pipe and the others were locked up in the Gobotron Stockades for attempted murder. Major Mo visited them, and the Rebels confided in him their suspicions about Bladez. Mo agreed, but control of the Council had fallen to Bladez with Zeemon's incapacitation, and Bladez now planned to launch the Guardian fleet on a special mission. Bent Wing once again convinced the Rebels to break free and clear their names. They found Bladez's home, and were shocked to see him conspiring with the Master Renegade and Cy-Kill to send the fleet into a trap. The Rebels were discovered and fought with the Master Renegade's lackey, Creepy. They defeated him, but not in time to warn the Command Centers before they blasted off. Fugitives Creepy recovered and attacked the Robo Rebels again, leaving them in dire straits. The Monster GoBot was prepared to break Super Couper in two when Tail Pipe valiantly charged the creature, occupying his full attention. Tail Pipe waived the other Robo Rebels away, and stayed behind to cover their retreat and face his fate alone. Double Cross Tail Pipe was captured and brought before the Master Renegade in chains, hung from the ceiling as a captive audience for the scientist's melodrama. Countdown to Annihilation

The Robo Rebels managed to free the Guardians and Renegades the Master Renegade had captured on the Prison Moon of Gobotron, returning them to the fleets. As the Command Centers and Thrusters attempted to retake Gobotron, the Robo Rebels infiltrated Bladez's mansion to rescue Tail Pipe. Super Couper managed to get him down and Tail Pipe turned his electronic skills to sabotaging the Master Renegade's super-weapon, the Gravity Collapsar Ray. The weapon was disabled, and soon all Guardian foes were driven into retreat. Major Mo and Zeemon presided over the Robo Rebels' graduation ceremony, as the newly-minted team was upgraded to full Guardians. Graduation Day On their first visit to Earth, the Robo Rebels vacationed at the Los Jóvenes Dude Ranch with Matt Hunter, Nick Burns, and A.J. Foster. They were surprised to learn Los Jóvenes was run by Ponce de León and various historic figures from the Wild West, made immortal by the legendary Fountain of Youth. Unfortunately, Loco and Vain Train were eavesdropping on this revelation, and captured the waters of the fountain for themselves. Loco re-engineered the water into an anti-chroniton agglutination that froze his molecular structure in time, making him unalterable and therefore invulnerable. The cocky Renegade was lured away from his laboratory, though, and Tail Pipe was able to reverse the formula and disable Loco's invulnerability. Going Loco

When the Renegades sought to sabotage or steal the Guardian's Space Hawk project, they kidnapped Dr. Anya Turgenova to subject her to the Brainstormer. Held captive on the dark side of the moon, the Renegades prepared for a rescue attempt by the Guardians to retrieve Anya. Unfortunately, Cy-Kill anticipated brute force while Leader-1 sent in Scooter and Tail Pipe to save Anya in a stealth mission that proved highly effective. The Hawks of Space Part 2 The Robo Rebels stopped Stinger and Stallion from stealing a meteorite fragment from a museum on Earth. Unfortunately, the Renegades were successful at their second attempt, after learning the art of ninjitsu. Cy-Kill's Ninjas Tail Pipe was at a supply depot with Leader-1 and Blaster when a Thruster buzzed their position. The Monster GoBot named Creepy was on the run from Cy-Kill, and hoped to use the Guardians to shake the Renegades off his tail. Unfortunately, all parties were sucked into a strange vessel by the Overseers. Curiously, the GoBots' super-structures were all altered by the experience. Forced into slave labor, the now dull and generic red car Tail Pipe was assigned with Crasher manufacturing a super-weapon called Anubis...sorry, A.N.Ubi.S. The Guardians and Renegades were forced to work together to escape, finally intimidating an Overseer into reversing their matter superposition ray and sending them home. Chains of Doom

The Robo Rebels defended a convoy bringing more material to GoBotron for the planet's reconstruction. Space Pirates of the Helix Nebula Tail Pipe was present at a dry dock in the Procyon Sector where the Command Center fleet was undergoing repairs. A Renegade attack coordinated by the newly super-intelligent Zod drove off most of the Guardians in residence and left Tail Pipe unconscious and unnoticed among the debris. When he awoke, Tail Pipe overheard Zod's plans to betray Cy-Kill. He sent a coded message to Leader-1, and the Guardians soon joined forces with Cy-Kill and the Renegades loyal to him to take back the dry dock from Zod. Tail Pipe remained their "inside man", feeding Zod's exact location to the attackers and then, when Zod and Cy-Kill reconciled and prepared to turn on Leader-1, Tail Pipe hit the airlocks and sent the Renegades blasting out into the vacuum of space. In Zod We Trust

The ongoing success of the Robo Rebels as a unit sparked some jealous from the previous up-and-coming heroes, the Secret Riders. When the Renegades stole a Macrocosmic Continuum Distorter from the Scientific Moon of Gobotron on the Secret Riders' watch, Tail Pipe's more jocular comrades began needling the Riders for their failure. One thing led to another, and the Secret Riders challenged the Robo Rebels to recover the Distorter before they did. The two squabbling squads were easily lured into a trap by the Renegades and taken aboard Rogue Star. The Secret Riders' leader Tri-Trak finally managed to focus the two Guardian teams into working together. The united Guardians then managed to escape Rogue Star and destroy the Continuum Distorter. Riders and Rebels

As Sideways and Gong played with mixing universal streams, the Renegades staged an all-out assault on Autobot City on Earth before the universal constants flipped, and the Decepticons were now attacking Guardian City. Tail Pipe and Raizor had just managed to make it back inside the city when they and Daniel Witwicky joined Bent Wing and Super Couper readying a Boomer for combat. The Robo Rebels turned their Boomer on the incoming Decepticons, but the Constructicons formed Devastator, who destroyed their Boomer with a single piece of thrown debris. The Robo Rebels scattered to avoid being destroyed themselves.

After the battle, Tail Pipe attended to the Guardians' mortally wounded Leader-1. He informed Major Mo and the others that Leader-1 simply would not survive his injuries. Echoes and Fragments 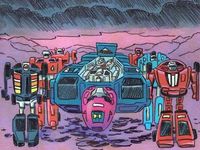 Waited 33 years to appear in something, just to lug a dead maniac in a spaceship... 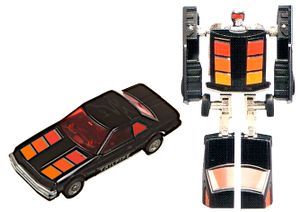 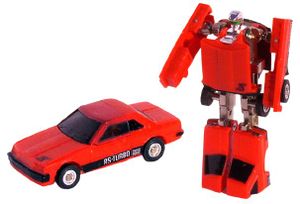 Tail Pipe was released by Tonka in the second series of GoBots, and converts from robot to Nissan Skyline 200 RS Turbo sportscar in 6 steps. The toy was a reuse of Skyline Robo from Machine Robo. Tail Pipe figure features ball-jointed shoulders and as both the joints and their housings are metal it is less prone to wear than some of the range. Uniquely, two different versions of Tail Pipe were issued simultaneously - one featured Skyline Robo's original generic red scheme, and a spiffy new Tonka-created black color scheme with orange detailing. Card art for the GoBots version displayed the black color scheme regardless of the packaged version and both had the same GoBot Number. There is fan speculation that the red version was Bandai overstock shipped to Tonka when the decision was made to not release Tail Pipe in Europe or Australia; sadly this is unlikely to ever be confirmed.
The word 'rare' has been devalued considerably in relation to mass-produced action figures but Tail Pipe is actually genuinely hard to find on the second-hand market in either version. While release ratios are unknown the black version is by far the most expensive of the two figures second hand, due to looking better and not being so similar to the Japanese release, but neither are common. Quite why Tonka went to the effort of making a new colour scheme, sticker sheet and so forth for Tail Pipe, putting the toy into mass production and then cutting said production off quickly is a mystery. The figure's shoulders are more delicate than many of his peers so it may have been in response to breakages, but that is speculation.

Adding to his bizarre little history, the red version of Tail Pipe was planned to be included in a Renegade Gift Pack along with Fitor and BuggyMan which was advertised in the 1986 Tonka Catalog but was ultimately not released. 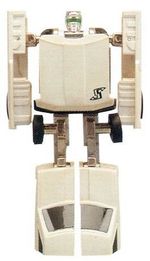