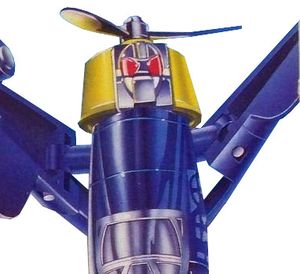 Bent Wing is a Guardian.

During the Diaspora, Bent Wing was dispatched to Level 34 along with the Robo Rebels and several evil Rock Lords. Cultural Appropriation 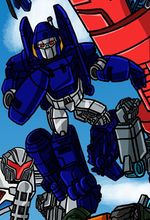 Bent Wing was a new cadet in the Guardian Academy trying to make the grade. Unfortunately, her impulsive nature and constant competition with fellow cadet Raizor were only two of the problems these "Robo Rebels" faced in their training. During a simulation exercise, Bent Wing and her squad were attacked by real Renegades, who almost managed to kidnap the Guardians' human allies if not for Leader-1's arrival. Remembering the incident with the Dread Launchers, the Guardian Council seriously considered the new cadets may not just be incompetent, but treasonous.

Their training instructor Major Mo confined Bent Wing's team to quarters, but Bent Wing decided it was their duty to clear their own names. She convinced Raizor, Super Couper, and the reluctant Tail Pipe to follow her. At the Council building, they had just confirmed that only Major Mo and Councilor Bladez knew of the simulation exercise in advance when a sound brought them running. The cadets found High Councilor Zeemon injured and clinging to life, and Hans-Cuff's security detail found them standing over the body. Rebels Without A Circuit

Bent Wing and the others were locked up in the Gobotron Stockades for attempted murder. Major Mo visited them, and the Rebels confided in him their suspicions about Bladez. Mo agreed, but control of the Council had fallen to Bladez with Zeemon's incapacitation, and Bladez now planned to launch the Guardian fleet on a special mission. Bent Wing once again convinced the Rebels to break free and clear their names. They found Bladez's home, and were shocked to see him conspiring with the Master Renegade and Cy-Kill to send the fleet into a trap. The Rebels were discovered and fought with the Master Renegade's lackey, Creepy. They diverted him, but not in time to warn the Command Centers before they blasted off. Fugitives

Creepy found the Robo Rebels again, and their cadet-strength blasters were too weak to truly defeat him. Before the team fell before him, little Tail Pipe rushed in and grappled with the Monster GoBot, sacrificing himself so his teammates could escape. Bent Wing and the Rebels found Major Mo, and learned the Guardian fleet had engaged the Renegades before the Master Renegade stepped in and overpowered BOTH sides after they were weakened. The Robo Rebels prepared a counter-strike as the last remaining free GoBots. Double Cross

On their first visit to Earth, the Robo Rebels vacationed at the Los Jóvenes Dude Ranch with Matt Hunter, Nick Burns, and A.J. Foster. They were surprised to learn Los Jóvenes was run by Ponce de León and various historic figures from the Wild West, made immortal by the legendary Fountain of Youth. Unfortunately, Loco and Vain Train were eavesdropping on this revelation, and captured the waters of the fountain for themselves. Loco re-engineered the water into an anti-chroniton agglutination that froze his molecular structure in time, making him unalterable and therefore invulnerable. Bent Wing being Bent Wing, she still wanted to fight on even after it was clear Loco was blaster-proof, but her fellow Robo Rebels forced her to retreat to come up with a plan. The cocky Renegade was lured away from his laboratory, and Tail Pipe was able to reverse the formula and disable Loco's invulnerability. Going Loco

Bent Wing was part of a frontal assault against Cy-Kill's base on the dark side of Earth's moon. Although they were driven off, the Guardians were really a diversion for Scooter and Tail Pipe to sneak in and rescue Anya Turgenova. The Hawks of Space Part 2

The ongoing success of the Robo Rebels as a unit sparked some jealous from the previous up-and-coming heroes, the Secret Riders. When the Renegades stole a Macrocosmic Continuum Distorter from the Scientific Moon of Gobotron on the Secret Riders' watch, Super Couper and Raizor began riding the Riders about their failure. One thing led to another, and the Secret Riders challenged the Robo Rebels to recover the Distorter before they did. The ultra-competitive Bent Wing naturally agreed. The two squabbling squads were easily lured into a trap by the Renegades and taken aboard Rogue Star. The Secret Riders' leader Tri-Trak finally managed to focus the two Guardian teams into working together. The united Guardians then managed to escape Rogue Star and destroy the Continuum Distorter. Riders and Rebels

As Sideways and Gong played with mixing universal streams, the Decepticons staged an all-out assault on Guardian City on Earth. Bent Wing and Super Couper were sharing a bunker with their fallen comrades Sparky and Professor Von Joy. As Bent Wing urged her partner to focus on the battle and get a stationary Boomer into place for a counter-attack, Tail Pipe and Raizor arrived with Daniel Witwicky and the Robo Rebels were reunited. As they pushed on the Boomer, Bent Wing commented to Tail Pipe she was worried they'd be trapped outside the city. "Me too!", said the fretful Tail Pipe.

The battle eventually ended, but with a terrible price. Bent Wing was present at the bedside of Leader-1 as the Guardian commander passed on from his injuries. Echoes and Fragments 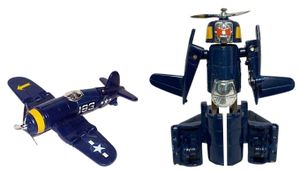 Bent Wing was released by Tonka in the third series of GoBots, and converts from robot to USNAF Vought F4U Corsair aircraft in 6 steps. Initially designed by Bandai for the Machine Robo line, the figure was initially unreleased before the prototype was used by Tonka, and never released in Japan. The reason for this can sadly be seen by looking at the toy, which has tenuous arms even by GoBots standards - though they have respectable articulation. A common wear point is the root of the wings, which can become loose; the propeller blades are surprisingly sturdy due to their thickness. The chrome on both the blades and the cockpit also wears through easily. The toy features a prominent tail wheel, but no main landing gear - instead small castors are built into the underside of the wings, allowing the toy to roll on flat surfaces. 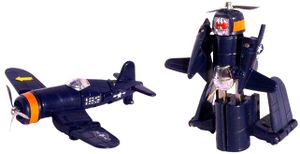 The European version of Bent Wing was almost identical to the American version but had an orange sticker around the engine cowling rather than a yellow one. It is also a lot easier to find second-hand.

The Australian version of Bent Wing was identical to the European release.

The figure was reissued by Bandai in Europe during 1993 as part of the second series of Robo Machines. For trademark reasons the figure was renamed simply Aircraft (presumably Vought were more feared than North American...) in the British market, with localised versions of the name used in other markets - including Aereo Ricognitore ("Reconnaissance Aircraft") in Italy. Sadly, like most of the Robo Machines figures Aircraft uses poor quality materials and suffers from mould degradation. On the plus side, it makes the toy easier to find.