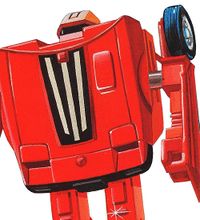 Major Mo is a Guardian. He is sometimes known as Major Domo.

During the Diaspora, Major Mo was dispatched to Level 34 along with the Robo Rebels and some evil Rock Lords. Cultural Appropriation

Major Mo was head instructor at the Guardian Academy, working with a particularly difficult class of cadets. The combination of a lack of effort, lack of courage, and lack of teamwork made Super Couper, Tail Pipe, Raizor, and Bent Wing nothing but a group of "Robo Rebels", as the Major called them. Still, he believed they meant well, and objected when the Guardian Council began to consider whether the Rebels were so bad, they might actually be Renegade saboteurs undercover. Nevertheless, he followed orders and confined the Robo Rebels to their quarters while an investigation was underway. Rebels Without A Circuit The Robo Rebels broke from their quarters and visited the Council chambers, where they uncovered evidence suggesting Council member Bladez was the real spy. Unfortunately, they were also found at the scene of an attack on High Councilor Zeemon, and were again imprisoned. Major Mo listened to their concerns, but unfortunately Bladez had risen to replace Zeemon on the Council, and was nearly untouchable now. Fugitives Bladez ordered the Guardian fleet of Command Centers launched for a special mission. He questioned Major Mo's loyalty as well, leaving the Major behind. The Robo Rebels found the Major in Guardian Academy, and revealed their further investigation had proven Bladez was working with the Master Renegade and Cy-Kill. The Guardian fleet was pitted against the Renegades' Thrusters, allowing the Master Renegade and Bladez to exhaust both parties and turn against them, imprisoning them all on the Prison Moon of Gobotron. Double Cross Major Mo and the Robo Rebels rallied their courage to free the prisoners. They Astro-Beamed to the Prison Moon and freed Leader-1 and Cy-Kill's forces for a retaliatory strike on the Master Renegade, who now controlled the unprotected Gobotron. Countdown to Annihilation Back on the planet, the Robo Rebels confronted the Master Renegade and disabled his Gravity Collapsar Ray, allowing the Guardians to retake control of Gobotron. At the graduation day ceremony that followed, Zeemon and Major Mo proudly oversaw Bent Wing and the others as they received Full Modification and induction into the Guardians. The Robo Rebels continued to use Major Mo's nickname for them as a badge of honor. Graduation Day Major Mo, Scooter, and A.J. Foster were inside the tetrionic capacitor on the Fortress Moon of Gobotron when the Renegades stole it. They managed to befriend the RoGuns, sentient weapons recently created by Doctor Go, and convinced them to turn against the Renegades. The RoGun Ruckus

On the planet Saeculum Gamma, Cy-Kill used a Time Portal to travel back and pluck Luther Unum from history before he had the chance to grow and become Leader-1. Without their Leader, the Guardians failed to oppose the Renegade forces, putting both Earth and Gobotron under Cy-Kill's control. In this alternate reality, Major Mo and Matt Hunter were leaders of the token resistance force. They encountered several Guardians from the original timeline, who had been preserved from the temporal changes by a special type of experimental force field. By comparing notes, Major Mo and these Guardians realized this was a timeline without Leader-1. Learning about an all-important prisoner named Luther Unum, the Guardian resistance put two-and-two together and assembled a rescue mission. Renegade Victory Part 1 Once Luther was freed, Major Mo and the others tricked poor, dumb Cop-Tur into revealing the location of the Time Portal. They commandeered an old Command Center from the Museum of Guardian Failures and set off for Saeculum Gamma. The resistance initiated uprisings on Earth and Gobotron at the same time, forcing Cy-Kill to split his forces in order to maintain control of his territory and the Time Portal. The Guardian Command Center was destroyed, but a life pod continued on towards the planet. They encountered Pincher, Twin Spin, Destroyer, and Sky-Jack defending the world. Major Mo fought the way through these Renegades, but was destroyed in the process. Fortunately, the surviving Guardians got Luther to the portal and restored the true timeline. Renegade Victory Part 2

Sideways and Gong attempted to have some fun by mingling the universal stream of a GoBots reality with those of a Transformers reality during the events leading to their first encounter with Unicron. As a result, Major Mo often found himself playing out a role previously reserved for the steadfast Autobot second-in-command, Ultra Magnus. During the Decepticon attack on Autobot Guardian City, Major Mo coordinated his troops (including the Robo Rebels and Secret Riders) in defending their headquarters alongside Leader-1's reinforcements from Moonbase One. Leader-1 succeeded in beating Megatron, but suffered grave injuries himself in the process. After the Decepticons were driven off, Major Mo and the surviving Guardians gathered around Leader-1's bedside. Leader-1 passed the figurative mantle of leadership to Major Mo, as well as the literal Guardian Matrix of Leadership from inside his chest.

Reality continued to fluctuate due to outside interference, and Major Mo found himself in command of both Autobot and Guardian forces on Earth. After receiving radio calls about the destruction of Moonbase One and Moonbase Two, Major Mo assembled his forces to oppose Unicron. Their plans were interrupted by the return of Megatron, now called Galvatron, and his Renegades. Major Mo sent Kup, Hot Rod and the Dinobots off in one Command Center while gathering Springer, Arcee, Bullseye, Motosan, Nick Burns, and A.J. Foster to his second ship. In the space pursuit that followed, both Command Centers were seriously damaged. Kup's crashed on Antares III, while Major Mo initiated emergency separation to fool Galvatron into thinking him destroyed. They limped their way to the Planet of Rock for repairs. Despite their deception, the Renegades and Decepticons found Major Mo's crew on Quartex. The major separated from his soldiers and tried to unleash the power of the Matrix, but failed. Beaten, he agreed to turn over the Matrix to Galvatron in exchange for the lives of his people. As the Renegades departed, the Autobots and Guardians were assaulted by the Rock Lords of Quartex, before Kup and Hot Rod arrived with reinforcements from Antares III. Major Mo was repaired as his united friends and allies prepared for the final conflict with...

...never mind. Vector Prime fixed the antics of Sideways and Gong, restoring Major Mo and the Guardians to their proper place in the universal stream flow. Echoes and Fragments 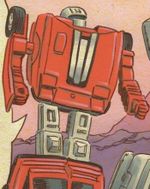 Major Domo was a Go-Bot that became one of Leader-1's key confidants and advisors when he styled himself as King of the Go-Bots.Issue 3 He helped Leader-1 hold court and accompanied him on the quest to find the Lazer Lance in order to defeat Zod. The journey took them inside Gobotron, to the long-abandoned Earth.

While Zod was vanquished Leader-1 was subsequently killed by Cy-Kill using the Command Center. The torso of the Go-Bot God Courageous was used as a funeral bier and Major Domo was one of those who carried it along with Small Foot, Pumper, Night Ranger, Tail Pipe and Good Knight - reflecting that Leader-1's faults were perhaps his responsibility as well.Issue 4 By way of recompense Major Domo became a key part of Road Ranger's new regime, revealing many of the choleric previous leader's secrets - including that the de-materializion chamber was actually a time tunnel that could allow Spay-C and his human crew to travel back to their own time.Issue 5 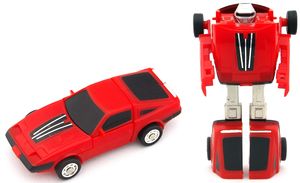 Major Mo was released by Tonka in the second series of GoBots, and converts from robot to Nissan 300ZX in 7 steps. The toy was a recolour of Fairlady Robo from Machine Robo, with a new red colour scheme but omitting the extra sticker sheet of the Japanese release. The toy features more plastic than many in the range, with only the thigh sections being diecast, though he retains rubber tyres. Major Mo has some articulation at the shoulder and knee, though the latter looks a bit unnatural.
Like Tail Pipe, Major Mo appears to have been a late addition to the second series' Hot Shot assortment (#7255). Unlike Tail Pipe, Major Mo stayed in the assortment for the third and final year of the series, with a card-mounted 3-D GoBots Sticker.

An unchanged Major Mo was included one of Tonka's Guardian Gift Pack #1 sets, with similarly unchanged versions of Rest-Q and Wrong Way. 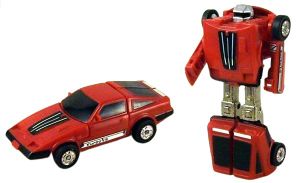 While the European release of Major Mo looked superficially similar to the GoBots release it in fact used a darker red plastic and included the additional stickers from the Japanese version. The white Japanese scheme was shown both in catalogues and on the backing card but was not actually released in Europe, while the vehicle mode was referred to as a Datsun 300ZX due to the Datsun brand being better known in Europe at the time.

The Australian version of Major Mo was identical to the European release, including using the white version on stock photography when only a red version was made, and also referring to the car mode as a Datsun 300ZX due to the Datsun brand being better known in Australia at the time. 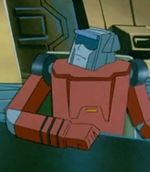