The full-size and portable versions of the Astrobeam

Uh...in other words, it's a temporary teleporter. Get zapped, go someplace else until the effect reverses itself, then return to the starting point.

Employed by Guardians and Renegades alike, the Astrobeam is often used to summon reinforcements quickly to Earth, rather than wait on space travel. However, the unstable nature of the Beam's quantum superpositioning makes it unpredictable when the effects will wear off and cause the new arrivals to vanish. Useful for escapes, potentially hazardous during a battle. 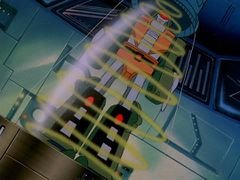 The Astrobeam was standard Guardians equipment, though they generally preferred to use Command Centers for transportation—though it was occasionally used for emergencies, such as calling in help for technical problems, Inside Job brief repair visits to GoBotron, Scooter Enhanced emergency reinforcements, Invasion from the 21st Level, Part I Renegade Rampage, Part I or rapid deployment of their Power Suits. Auto Madic 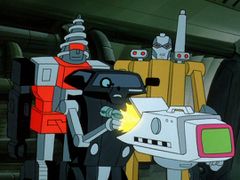 A smaller, portable version was created on GoBotron in a facility in GoBotolis, but was stolen by Cy-Kill, Crasher, and Cop-Tur. This led to the Guardian Council authorising a full-strength strike on the Renegade FortressBattle for GoBotron. However, the Renegades were able to keep possession of the device, which was important for allowing both status updates Target Earth and reinforcements Conquest of Earth during their near-successful conquest of Earth. While the bulk of the Renegades were captured when the scheme failed The Final Conflict they retained the Astrobeam, which was a key part of their plan to free Cy-Kill and Fitor from GoBotron's Prison Moon, as Dr. Go used it to send them a Stealth Device. Cy-Kill's Escape After that the device remained a regular part of the Renegades' schemes as it allowed reinforcements and specialists to be quickly transferred from Roguestar to Earth or wherever else they were needed. As such it was used for bringing in reinforcements Speed Is of the Essence and extracting spies. Wolf in the Fold Dr. Go attempted to modify the device to extend or remove the time lapse before it reversed, but it is unknown whether the work was ever completed. Steamer's Defection. However, the Renegades were later able to miniaturise it further as part of their plan to kidnap Zeemon. Guardian Academy