Invasion from the 21st Level, Part I

Cy-Kill unleashes a race of interdimensional insectoids against the Guardians, but his plan backfires when the creatures' queen decides to conquer Earth for herself. 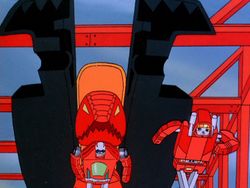 To bypass UNECOM's defense satellites, Crasher and Cop-Tur conceal themselves within a metallic sphere that falls to Earth under the guise of a harmless meteor. Emerging from their craft in a wooded area, they reveal they have a third passenger with them: the terrifying Scales, who is then unleashed on a nearby UNECOM perimeter station that Turbo and Scooter are helping to construct. Turbo is able to defeat Scales by shooting a girder hanging on an overhead crane down on top of him, but in the chaos, Crasher and Cop-Tur escape with their true objective, the oscillation rod Scooter has invented which is a key component in the station's operation. 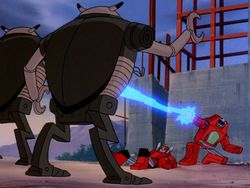 Crasher and Cop-Tur return to Roguestar, where Doctor Braxis uses the oscillation rod to complete his Dimensional Interfacer, a machine able to teleport beings across different dimensions. Cy-Kill seeks vicious other-dimensional monsters to use against the Guardians, but is unimpressed by what Braxis finds in the first few dimensional "levels." Knocking the human aside, Cy-Kill ratchets the machine up the scale to the 21st Level, where he finds just the creatures he needs: a race of huge, powerful Insectoids. A handful of the monsters, along with their queen Exor, are teleported by the Interfacer to the UNECOM station, where they immediately attack Turbo and Scooter. Turbo is able to scatter the queen's troops with a little help from some UNECOM tanks, but he is unable to stop Exor herself from abducting Scooter. Exor establishes an underground lair where she imprisons Scooter in a device called a sapper, and begins plotting to conquer Earth. 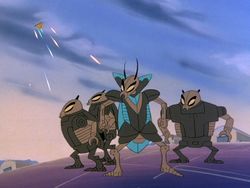 The wounded Turbo returns to UNECOM headquarters, where, when asked about the insectoids by Leader-1, he compares them to creatures they fought in the past known as the Tri-Cats of Fedge. Recalling that encounter, Leader-1 Astrobeams Blaster, another Guardian familiar with the Tri-Cats, in for back-up... and just in time, for no sooner is Blaster briefed than Exor and her insectoids tunnel into and attack the base! Using her mighty telekinetic powers, Exor destroys the communications center to blind UNECOM's military forces, then deflects Guardian fire while she and her minions escape, levitating a huge blast door over the tunnel to block the Guardians from pursuing them. The Guardians managed to haul the door off, but the insectoids have collapsed the tunnel behind them. 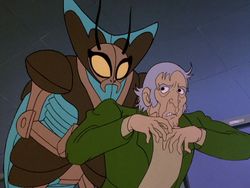 Exor addresses the people of Earth, warning all not to resist her rule. Cy-Kill, of course, has other ideas; content that Earth's defense have been left suitably crippled by Exor's attacks, he orders Braxis to reverse the Interfacer and send the insectoids back to their dimension, leaving the Renegades to swoop in and conquer the weakened planet. When the Interfacer portal opens and begins to suck them back in, however, Exor—unwilling to return—uses her mental powers to fight its pull. The Interfacer is overloaded by her resistance and the portal shuts down, and worse still, Exor is able to track it back to its source! The insectoids board Roguestar and Cy-Kill grapples with Exor herself, but he is caught by surprise when she feigns surrender and then blasts him. The other Renegades quickly fall to the insectoids, while Braxis is able to bargain for his life by promising to fix the Interfacer for Exor so she can bring more of her kind to Earth. Simultaneously, the Guardians follow the insectoids to Roguestar, but are met in battle on the massive ship's hull by the creatures upon arrival. The heroes manage to emerge triumphant by trapping their foes in magnetic energy nets provided by Blaster, but the fighting provides Braxis and Exor enough time to repair the Interfacer. The Guardians burst in but are too late to stop Exor opening a new portal and summoning an army of even more powerful insectoids warriors! 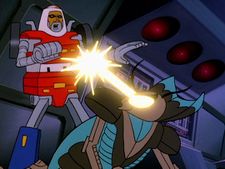 —Turbo drops his catchphrase; Scooter ain't got time for it

—Exor dupes Cy-Kill and blasts him 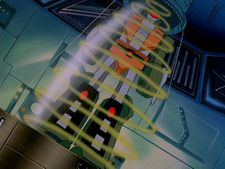 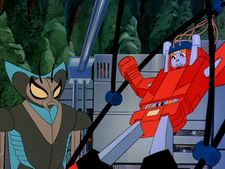 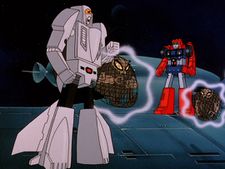 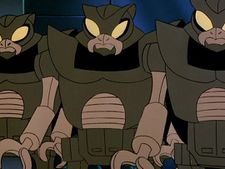 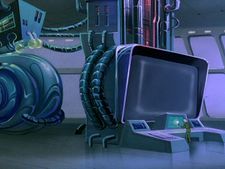 2014 — Challenge of the GoBots — The Series, Volume One (Warner Archive Collection, USA)