"Come out to the Command Center, we'll get together, have a few laughs..." 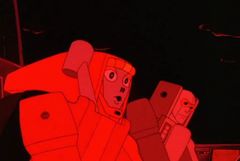 The Command Center is searching for a distress call in a quadrant of space that has been received by UNECOM. Scooter is yet to find anything, but Leader-1 says the search has to continue, while Turbo and Van Guard take an oil pool bath. However, Cy-Kill, Crasher and Cop-Tur are lurking nearby on Thruster, preparing to launch "Operation: Inside Job". Thruster blasts the Guardian ship, damaging its' power cells and sending the ship haywire. Leader-1 orders the remaining power diverted to the shields as they plunge through an asteroid field. Unable to bring things under control they call in Professor Von Joy by Astrobeam, and he is able to bring the emergency systems online. He diagnoses the computer as suffering from an electromagnetic infestation, and modifies the Astrobeam so the Guardians can be sent inside the computer. After informing them they have an unsure amount of time and warning them they could cause further damage he returns to GoBotron. Leader-1, Turbo and Van Guard go into the Astrobeam, leaving Scooter in charge. They find themselves appearing in an electronic world but Cy-Kill returns and attacks the ship again; Scooter is unable to contact anyone for help. Inside the computer the Guardians come under attack from the system's cleaner drones, eventually losing them after a chase. Van Guard finds debris suggesting there might be more to the system's problems than mere electromagnetic infestation. Meanwhile Thruster finally takes out the Command Center's shields, allowing the Renegades to board the ship. They find it empty - Scooter has hidden himself with a hologram, but has no idea what to do next. 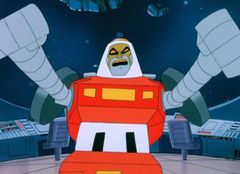 Inside the computer the Guardians are attacked by a magnetic vortex, and Turbo falls deep into the system. Out in the ship Crasher is unable to find any Guardians and is further held up when Scooter masquerades as Cop-Tur, insulting her and running off; Crasher then finds the real Cop-Tur and attacks him. Leader-1 and Van Guard meanwhile find the disabled Turbo and try to lift him to safety when Vamp, Pincher and Scorp appear - the real source of the sabotage. Despite being under fire Turbo is rescued, with a stray shot from the Renegades takes out the magnetic field that was restricting Turbo. However, Cy-Kill works out what has happened to the Guardians and separates his squabbling minions to tell them he believes the Guardians slipped past them and are hiding onboard Thruster. Once they go to check it out "Cy-Kill" reveals himself to be another of Scooter's impressions, however. Meanwhile the Monster GoBots trap the other Guardians in a dead end and collapse the roof on them, before heading towards the exit port as their time inside the computer is running out. The Guardians escape but on the ship the real Cy-Kill prevents Crasher and Cop-Tur from leaving and correctly deduces where their enemies are and decides to lay in wait. Meanwhile Van Guard is able to bait the Monster GoBots before Turbo arrives. 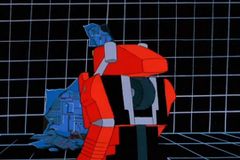 The Guardians lead them into a trap, tricking Vamp, Scorp and Pincher into attacking the cleaner drones. Both groups then escape the system, and the Renegades are able to attach neural locks to the Guardians; the Monster GoBots are down for the count, however. Scooter then sneaks to the Astrobeam and miniaturises himself as the Renegades prepare to fly the Command Center to Roguestar. He is able to hack into the ship's computer and trick them into believing the other Guardians have revived, before trapping Cy-Kill's leg in a door, pumps gas in, magnetises and demagnetises the roof and covers them in oil - which Cy-Kill assumes is due to Vamp, Pincher and Scorp having taken their sabotage too far. Scooter is then chased off by the cleaner drones but the Renegades have already evacuated, believing the ship to be on the point of self-destruction. Returning to normal size, Scooter revives his friends as Cy-Kill berates Vamp, Pincher and Scorp - still unaware that Scooter was behind it all. The tiny Guardian then regales his weary comrades with the story of his unlikely victory.

"I can't find them anyway!"
"It figures, you couldn't find your head with a map."

—Crasher and Scooter disguised as Cop-Tur. 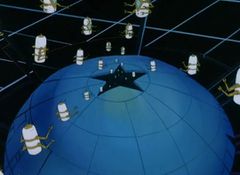 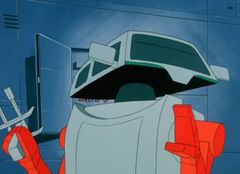