A Renegade named Steamer wants to switch sides, but the Guardians are not convinced. 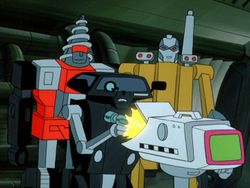 Aboard Roguestar, the Renegades watch as Doctor Go completes a series of upgrades to the Astrobeam that will remove its forty-eight hour time-limit. After zapping his crowd of onlookers to get them to give him some breathing room, the doctor prepares to install the final necessary microchip... whereupon the time-limit of the beam, used to bring Doctor Go to Roguestar, runs out, and he vanishes! With speed being of the essence due to the fact that the Guardians are on the verge of the same Astrobeam breakthrough, Cy-Kill is unwilling to wait for the beam to re-cycle, and instead leads Crasher, Cop-Tur, and Steamer in an attack on GoBotron's Astro-Science Center to steal the Guardians' own Astrobeam prototype. Crasher and Cop-Tur dispose of guards Night Ranger and Path Finder, but Crasher gets so worked up during the fight she nearly smashes the beam prototype, forcing Cy-Kill to step in and block her path with a repulsion field. Steamer grabs the third guard, Sparky, before she can sneak away, but when she proves unable to unlock the safe containing the new Astrobeam blueprints, Cy-Kill orders her destroyed. Steamer takes her outside to carry out the order, but, lacking his fellow Renegades' ruthless edge, decides to let her go instead. Unaware of Steamer's insubordination, the Renegades withdraw with the Astrobeam prototype in their clutches, and simply destroy the lab to obliterate the blueprints, preventing the Guardians from duplicating the new beam. 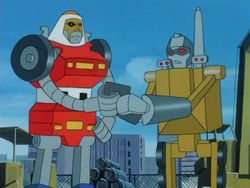 The Renegades relocate to Earth, intending to use the hydroelectric power plant at Hoover Dam to power the new Astrobeam and then teleport legions of troops to the planet. Steamer is charged with leveling nearby Boulder City in order to build a Renegade staging base for the operation; remote-control devices are placed on human construction equipment so Steamer can use them in his assigned task, and Cy-Kill also provides him with a disc containing Guardian Command Center blueprints, highlighting weak spots, so he can effectively fight back if they arrive to stop him. However, Steamer has no taste for the mission, unwilling to harm humans, and promptly quits. Cy-Kill sends Crasher and Cop-Tur after him, and they corner him in an alley, but Steamer blasts a shower of debris from some nearby buildings down on them, burying them long enough to escape.

Meanwhile, word of the Renegades' attack on GoBotron has reached Leader-1's team on Earth. They summon Nick Burns to join them, then set up patrols around Earth power plants, knowing how much energy will be required to power the new Astrobeam. Their search is handily narrowed down when Steamer arrives at the Command Center, announcing his desire to join the Guardians, and telling them all about Cy-Kill's plan. Leader-1 is willing to give Steamer a chance and allows him to lead them to Boulder City, which results in a battle between the Guardians and Crasher and Cop-Tur. During the fight, Steamer protects Nick, which proves his good faith to Leader-1—but not enough for Turbo. 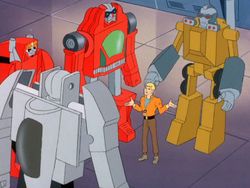 Learning that Steamer has joined the Guardians, Cy-Kill immediately sets about undermining the defector. Knowing that Steamer will tell the Guardians about the remote control devices on the construction vehicles, Cy-Kill has them all removed; thus, when the Guardians come looking, it appears Steamer is lying and has actually led them into an ambush. Caught by surprise, the Guardians are overpowered and forced to retreat back to the Command Center, where suspicion immediately falls on Steamer. Harsh words escalate into shoving, and when Turbo pushes Steamer over, he drops the disc given to him by Cy-Kill. Scooter snatches it up and examines it, and its contents incriminate Steamer further, forcing a disappointed Leader-1 to order him taken to GoBotron for trial. Determined to prove his innocence, Steamer fights his way free and flees from the Command Center. Nick is dejected, but Turbo tells him not to be so gullible in the future. 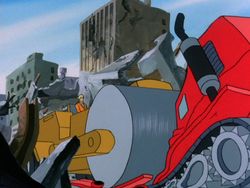 Steamer returns to the construction yard just as the Renegades have completed the re-installation of the remote control devices in the vehicles. He fends off an attack by Cop-Tur, but is unable to stop Cy-Kill from activating the vehicles and directing them into the city. Steamer races back to the Command Center to warn the Guardians of the coming threat, and though he is met with hostility, the Guardians quickly realize he has been truthful all along when the Renegade attack on the city begins. In the battle that follows, Nick pilots Steamer in his steamroller alternate mode to crush as many of the remote-controlled vehicles as possible, then the pair face Cy-Kill down in a game of chicken. Cy-Kill is the loser, and as he swerves off, he drops his control panel, enabling Steamer to crush it and end the danger posed by the vehicles. Leader-1 is forced to destroy the Astrobeam prototype to keep it out of Renegade hands, and the Renegades, outmatched, are forced to retreat. Turbo apologizes to both Steamer and Nick, and Steamer is welcomed into the fold. 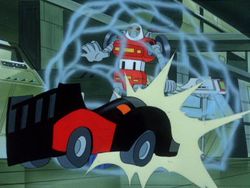 "I don't know why I tolerate your arrogance, Doctor Go!"
"It iz because you know genius vhen you zee it, Zy-Kill!"
"Huh! Genius or madness!"
"Does it matter?"

"You clumsy fool! You nearly wrecked the prototype!"
"Sorry, sorry, Cy-Kill! I just... got a little hyper!"
"You're allllllways a little hyperrr." 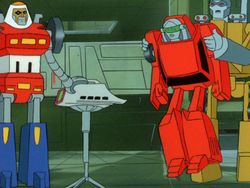 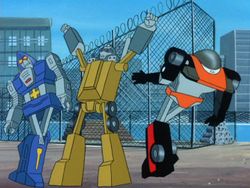 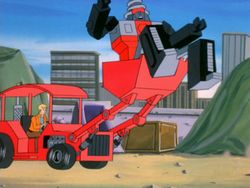 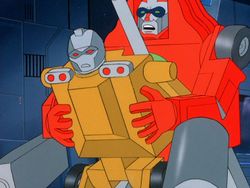 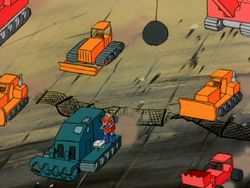 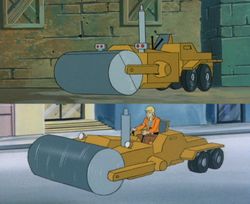