Cy-Kill targets the planet Tri-Ceti for conquest and sets his sights on its elders' magical Tramulet. 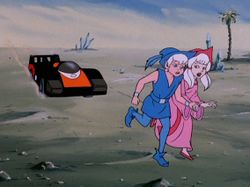 On the pyramid-shaped planet of Tri-Ceti, native Trindles Trevor and Troilene have their fruit-picking interrupted by Crasher and Cop-Tur. The Renegades have arrived to conquer the planet as the first stepping stone in a three-pronged scheme to claim dominion over Earth and GoBotron, and quickly set about imprisoning the Trindles, though Trevor, Troilene, and the three wise elders of their race manage to evade capture.

The Guardians learn of the invasion of Tri-Ceti when Scooter picks up a stray Renegade transmission. They immediate set course for the planet, picking up Matt, A.J., and Nick along the way when they cross paths with the humans on their way back from a resource survey mission out in space. Upon landing on Tri-Ceti, however, the Guardians and humans soon discover themselves trapped inside a huge, pyramidal forcefield that neither Turbo's brute force nor the Command Center's lasers can penetrate. They believe it to be the work of Cy-Kill, but in actuality, the field is being projected by the magical three-piece Tramulet wielded by the Trindle elders, who have mistaken the Guardians for the invading Renegades. The Renegades themselves observe the scene from afar and Cy-Kill, hungry to obtain the Tramulet's power, orders them to move in and take it for him. The Trindles scatter, which causes the forcefield to fade away, and the Guardians, now freed, rescue Trevor and the elders from the Renegades. Unfortunately, Troilene is captured by Cop-Tur and taken back to Thruster. 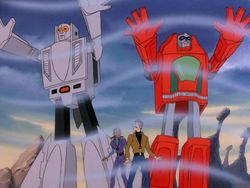 The Guardians are determined to keep the Tramulet out of Cy-Kill's hands and prepare to attack the Renegades at daybreak, Astrobeaming Path Finder and Blaster in for backup. Alas, during the night, the elder Cyrus is captured by the Renegades, and Troilene is released with a message demanding the surrender of the others. Despite the Guardians' wishes, the remaining two elders give themselves up, allowing Cy-Kill to obtain all three pieces of the Tramulet. The Renegade leader plugs the talisman into an amplifier that greatly increases the range and power of its forcefield, successfully testing the improved field on a trio of Zods. The Guardians soon arrive, but the field keeps them from getting close to the Renegades, until the ever-theatrical Cy-Kill decides to put on a display of his new power and attempts to surround one of Tri-Ceti's three suns in the forcefield. Tri-Ceti grows dark as the light from the ensnared sun is blocked out, but this exertion proves too much for the amplifier, which begins to overload. Cy-Kill removes the Tramulet and the Renegades beat a retreat, while the Guardians and Trindles dive for cover as the machine explodes. 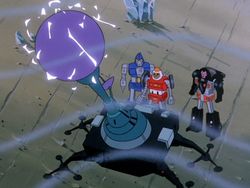 After freeing the other captive Trindles, the Guardians go after the Renegades, only to find they have already constructed a second, sturdier amplifier. Leader-1 is injured when the Guardians attempt to destroy it, forcing the heroes to retreat. Seeing no other option, Trevor comes to the drastic conclusion that they must destroy Tri-Ceti itself in order to obliterate the Tramulet and prevent its power from being used for evil. While the Guardians position antimatter detonators at key points around the planet, the Trindles board a huge spacecraft that will take them to safety. Scooter broadcasts a phony signal on the Renegades' frequency to lure the villains—who have withdrawn to Thruster, in orbit—back down to Tri-Ceti, but Cy-Kill figures out their plan and instead uses the Tramulet to project a forcefield that traps the Command Center and the Trindles' ark on the planet, with only two minutes left on the detonators' unstoppable timer! 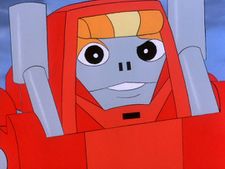 —Scooter's only trying to help, Turbo, lay off! 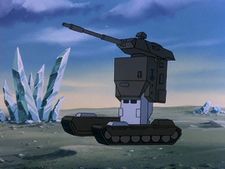 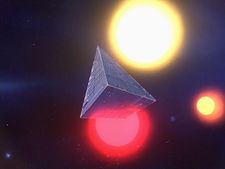 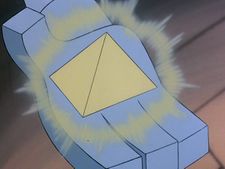 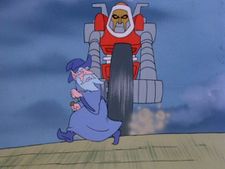 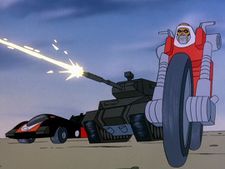